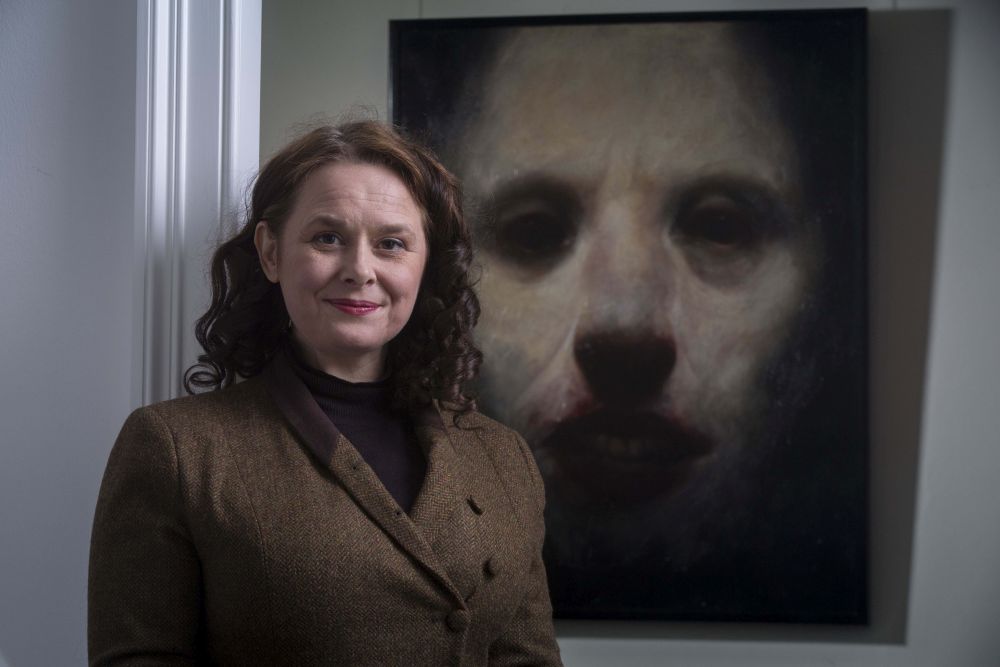 With thanks to Esther Green.

As ancient buildings with intriguing pasts, castles have a reputation for being places where things go bump in the night and that raise unexpected goosebumps.
Visitors to Drum Castle at Drumoak could be forgiven for thinking they are coming face to face with a ghoulish spectre after an art display has brought a ghost-like presence to the historic venue.

The haunting image ‘Gallowgate Lard’ by Ken Currie is one of the significant pieces in the Aberdeenshire castle’s exhibition of key works on loan from Aberdeen Art Gallery, now closed for a £30m refurbishment.

It is one of 20 artworks loaned from the city gallery that form the opening display at the castle’s new exhibition area, which has seen an entire floor redeveloped to create a museum-standard exhibition space showcasing important artworks now and in years to come.

‘Human Presence’ explores how artists capture a human figurative presence where the approach may be aesthetic, witty, playful or sinister and brings mid to late 20th Century paintings and contemporary installation works to the historic setting.

“Drum is very much the people’s castle, and I don’t like to think of the castle as haunted as I work here in the evenings but there are sometimes some unexplained occurrences.

“Things like ladies’ laughter in the garden when there is no one there, servants’ bells suddenly ringing when there is no one upstairs, the temperature suddenly dropping in the green closet for no reason, but the oddest one was when I came in and found all the tankards had been swapped around on the dining room mantelpiece and categorically no one had been in the Castle from when I had closed it the night before.

“I am not a superstitious person and always look for the reasonable explanation, but that had me completely flummoxed!

“The nicest mysterious happening at Drum though, is when the fairy doors appeared all over the estate, and we think we caught a fairy on camera; a mysterious mist was photographed on our swallow-cam.

“Now that we have opened up the upper floor, we are curious to see if there are mysterious happenings up there as well!”

Drum Castle dates back to the 1300s and was the seat of the Irvines, a clan who supported the Stuarts during the Jacobite uprisings.

It became part of the National Trust for Scotland in 1975 and transforming the second floor manager’s accommodation into the gallery has opened up an area of the castle previously unseen by the public.

Other works on show include ‘Highly Sprung’ by Julia Douglas, a dress made from 12,000 clothes peg springs, and ‘Restraining Coat II (Female)’ by Julie Roberts, a painting which implies a human presence with no body in it.

Drum Castle, Garden and Estate is owned and operated by the National Trust for Scotland and is one of more than 100 properties which the conservation charity promotes and conserves, for the benefit of the nation.

The building is part Jacobean mansion, with a 700 year old medieval tower attached. The castle has long connections with the Irvine family who maintain close links with the property and live nearby. It has a fine collection of art, music and provides a fascinating insight into the life of one of Aberdeenshire’s most historic families, their staff and a way of life which is now almost extinct. Drum also has extensive gardens, including a famous rose garden, woodland and walks.