Eric Auld – teacher, artist, source of inspiration for many of Aberdeen’s painters passed away towards the end of 2013. The Rendezvous Gallery on Forest Avenue is holding a retrospective show of his work, organised in part by his daughters. The show opened to a full, appreciative house on Friday 6 February. Suzanne Kelly was in attendance. 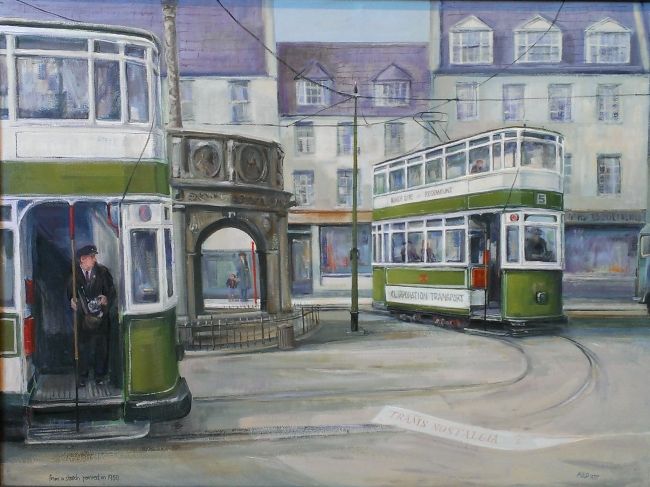 Eric Auld will remain one of our area’s most influential and loved artists. He captured Aberdeen’s harbour, day to day life in his still life work, Highland games pageantry, and the natural beauty of his life models.
As a teacher in Kincorth he influenced many students. One such is Keith Byers, local portrait painter/artist. Keith’s life drawing work is being highlighted in the Rendezvous Gallery’s window as part of the Auld exhibition.

Perhaps the most striking of Auld’s work is the large self-portrait which is also shown on the front of the show’s catalogue.

His still lifes with fish and loaves of bread are gentle, pleasing works; his accomplished nudes are natural and unpretentious. Some of the land and seascapes become bold and expressionistic and are very striking works. Clearly Auld was able to work across various styles and traditions.

“Eric Auld, an artist with an inherent talent for painting, was a member of a well-known artistic, Aberdeen family. His father, Alexander, and his mother, Margaret, were both art students at Gray’s School of Art, Aberdeen. Margaret, herself accomplished in the painting of still lifes, encouraged Eric to follow an artistic career.

“Eric’s sister Rozelle, who married the architect Valentino Morrocco (brother of Alberto) in her turn encouraged her own sons, Nicholas and Jack, to become professional artists.

“From 1948 to 1953, Eric attended Gray’s School of Art where, under the tutelage of Alberto Morrocco, Hugh Adam Crawford and Robert Sivell, he immersed himself in art. During his period at Gray’s, he had his first solo exhibition at the then well-known art cinema, the Gaumont, at 181 Union Street, Aberdeen. According to his diaries, this proved a great success.”

The gallery on the opening night is packed with former friends, students and art lovers. In many ways this show not only charts Auld’s progression as an artist but also shows changing tastes, techniques, and at the same time captures a changing local environment and society. The show is up through 28 February.

It really is a must for anyone who is interested in the North East’s visual arts culture.