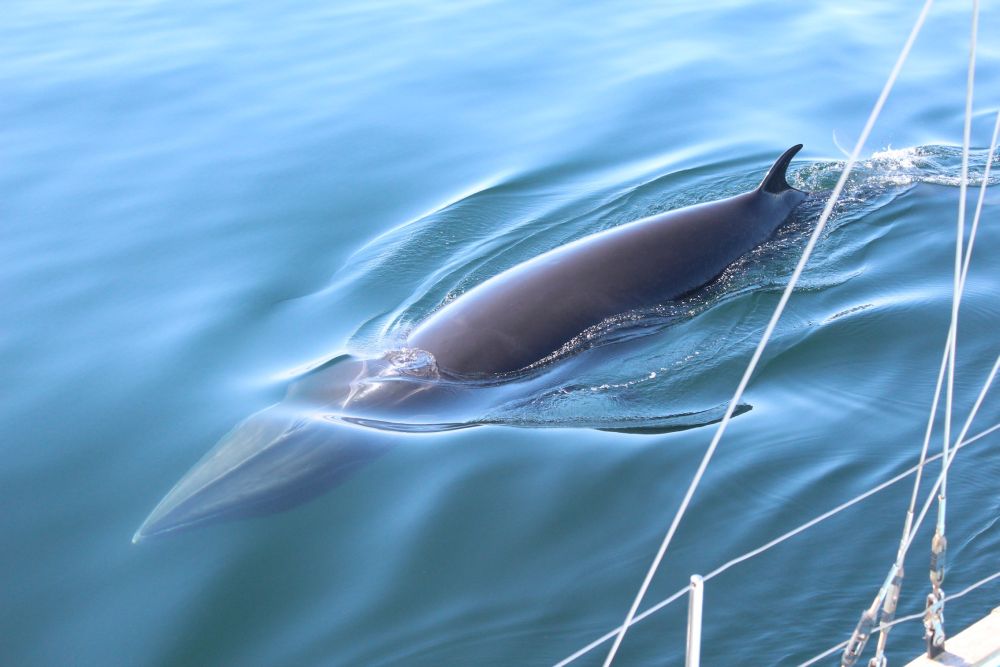 Harbour porpoise sightings off Scotland’s west coast increased by 25 per cent in 2014 compared to the previous year while sightings of basking sharks unexpectedly fell by 33 per cent, during marine research expeditions carried out by Hebridean Whale and Dolphin Trust.

The charity’s extensive research also revealed dramatic evidence of a shark attack on a member of an endangered group of killer whales thought to be the UK’s only resident population of orca.

The latest studies were carried out in a research season lasting from May to October last year, and form part of the trust’s unique long-term monitoring of whales, dolphins and porpoises – collectively known as cetaceans – in the Hebrides. The surveys also collect data on basking sharks.

Kerry Froud, Biodiversity Officer at Hebridean Whale and Dolphin Trust, said: “Our findings add to knowledge about cetacean distribution, abundance and habitat use in Scotland’s western seas – and allow us to make informed recommendations to protect these remarkable species.

“This pioneering research is vital for effectively conserving the world-class biodiversity of these waters – and for securing the long-term future of spectacular cetaceans and iconic basking sharks.”

The trust’s teams of marine scientists and volunteers encountered 574 groups of harbour porpoises during 2014 – a 25 per cent increase in the rate of sightings compared to 2013. Reasons for this increased sighting rate – of up to eight groups per 100 kilometres surveyed – may include conducive weather and calm seas, making the unobtrusive porpoise easier to detect.

Hebridean Whale and Dolphin Trust has previously discovered that the Hebrides hosts one of Europe’s highest densities of the harbour porpoise, the UK’s smallest cetacean – but Scotland still has no protected area for this species as required under European Union directives.

Basking shark sightings fell by 33 per cent from the previous year to 16 encounters – showing a trend of decreasing sightings of the world’s second biggest fish in the area over recent years.

Notable highlights during 2014 included two separate encounters with what is believed to be the UK’s only known resident population of killer whales – five males and four females known as the West Coast Community. 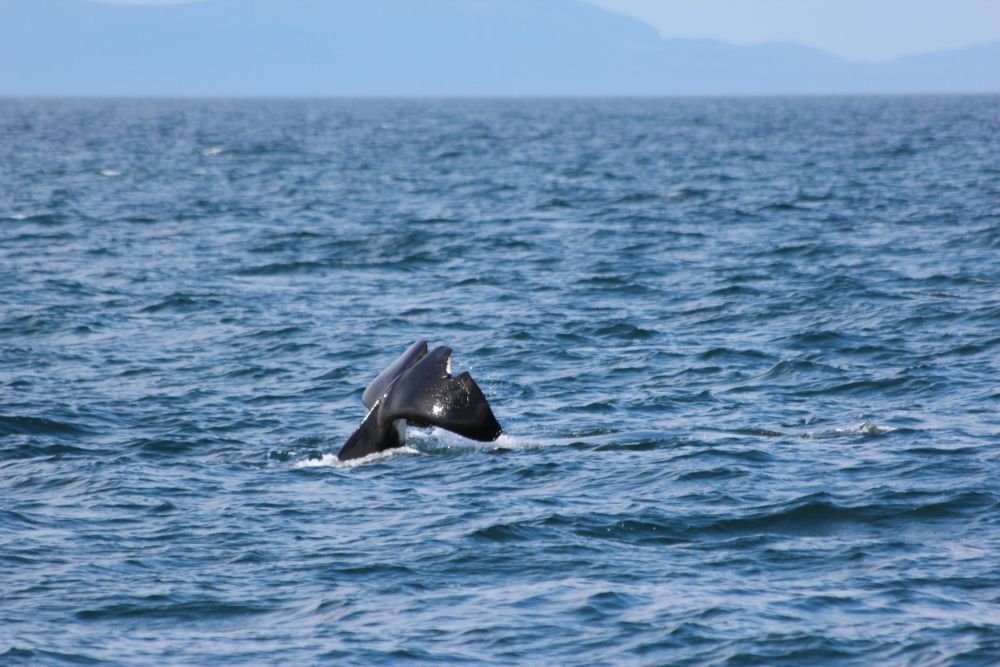 This small, isolated population of orca has never produced offspring since studies began, raising fears that it faces imminent extinction.

Evidence of drama emerged when one of the group’s males – known as John Coe – was observed with a large area of his tail fluke missing.

Consultations with experts suggest that this was almost certainly the result of a shark attack.

Another outstanding close encounter featured minke whales riding in the bow-wave of the trust’s research yacht Silurian. This was unexpected as minkes are usually elusive and shy of boats.

In July, an individual minke approached Silurian with what appeared to be blue plastic strapping wrapped round and embedded in the front of its head – a stark reminder of people’s impact on the marine environment. The crew was unable to disentangle the whale.

Cetacean entanglement in fishing gear and litter can cause mobility problems, injury and even slow and agonising death. Other human activities causing increasing stress on cetaceans and basking sharks include fisheries bycatch, climate change, pollution, underwater noise and habitat damage.

Silurian – previously used in the filming of the BBC’s The Blue Planet series – covered more than 4,500 nautical miles during 2014, equivalent to crossing the North Atlantic three times. It surveyed to the Saint Kilda archipelago – the remotest inhabited part of the British Isles – twice, rounded the Mull of Kintyre to the south and reached Cape Wrath, mainland Britain’s most north westerly point.

In total, the surveys recorded more than 1,400 encounters with cetaceans and basking sharks, and recorded almost 600 hours of underwater acoustic detections of cetaceans.

Good weather conditions for surveying allowed twice as many photo identification opportunities than in 2013. This technique allows individual cetaceans or basking sharks to be identified by their distinctive markings, often shedding new light on population sizes and social dynamics, and whether individuals interact with other populations. The latest results are currently being analysed.

The annual surveys depend on paying volunteers. In 2014, 65 volunteers clocked up 760 survey hours – working with scientists on visual surveys and acoustic monitoring with underwater microphones or hydrophones, and identifying individual cetaceans through photography. 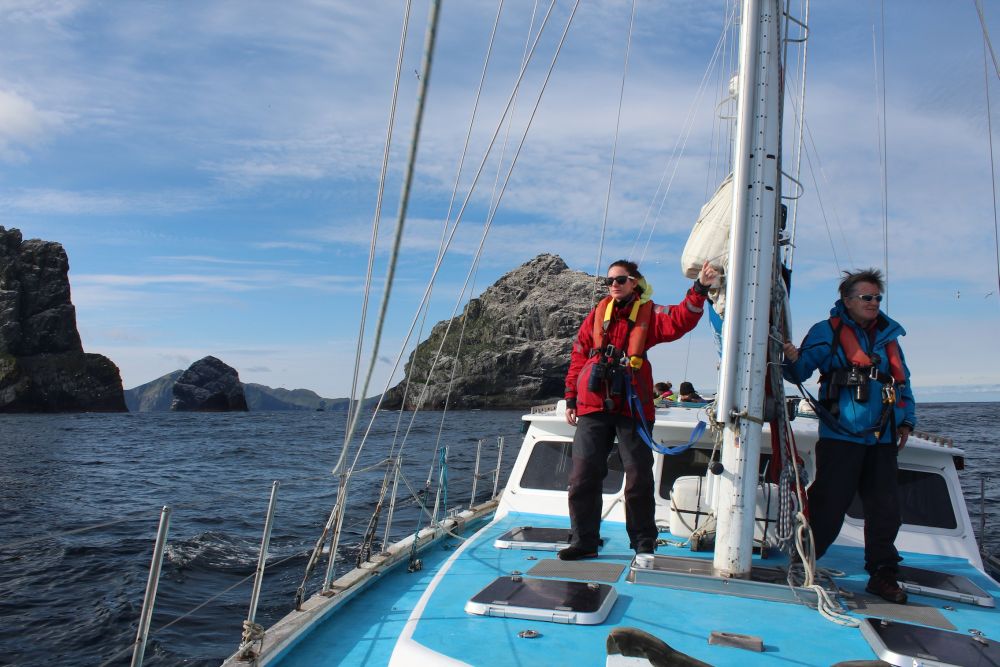 Hebridean Whale and Dolphin Trust – based in Tobermory on the Isle of Mull – is recruiting volunteers for its 2015 surveys, to live and work as citizen scientists onboard Silurian for periods of almost two weeks from April to September. Participation costs cover boat expenses, accommodation, training, food and insurance, and support the trust’s research. For details, contact Morven Russell at volunteercoordinator@hwdt.org, call 01688 302620, or visit www.hwdt.org.

Western Scotland’s seas are one of Europe’s most important habitats for cetaceans and one of the UK’s most biologically productive areas. So far 24 of the world’s 83 cetacean species have been recorded in the region, many being national and international conservation priority species.