There has been a confirmed sighting of the West Coast Community of killer whales off Peterhead – the first time members of this small and highly unique population have been reported off Scotland’s east coast, reports the Hebridean Whale & Dolphin Trust. 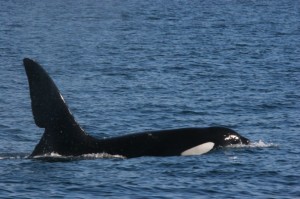 Video footage of the sighting, filmed by Peterhead man Ian Nash on 20 August, clearly shows a male whale known as John Coe, identifiable by a very distinctive dorsal fin notch, with another male and at least one female.
Led by Sightings Officer Mark Hosford, the Trust has established a wide-ranging sightings network and in cooperation with residents and seafarers continues to map the distribution of cetaceans off Scotland’s west coast.

The Trust has been monitoring this group’s movements since the early 1990s, with sightings recorded mainly in the Hebrides, Ireland and Wales.

Following this week’s Peterhead sighting, the charity can now expand significantly the known range of these apex predators.

“This confirmed sighting is a really exciting development. The West Coast Community is thought to be the only resident population of orca in the British Isles, and understanding their behaviour and movements is crucial to the conservation of these remarkable creatures“

John Coe’s distinctive notch allowed Sanna Kuningas of the Sea Mammal Research Unit to recognise him as part of the West Coast Community and  to alert HWDT and Dr Andy Foote, who has extensively studied orca populations in the NE Atlantic as part of the North Atlantic Killer Whale ID (NAKID) project.   www.northatlantickillerwhales.com

The West Coast Community’s  entire population comprises just five males and four females, and no calves have ever been recorded in two decades of HWDT monitoring.

Dr Foote’s research confirmed that members of the West Coast Community never interact with other NE Atlantic populations, and are actually morphologically different from the area’s other populations in eye patch orientation. It is suspected that this small population preys exclusively on other cetaceans including porpoise and minke whale. All these variables point to a distinct, highly vulnerable killer whale population.

HWDT relies on members of the public to report sightings of whales, dolphins, porpoise and basking sharks to enable a better understanding of the marine environment, both locally and internationally.

“The HWDT research vessel Silurian has a large area to cover and can only be in one place at a time, so having a community-based sightings network allows HWDT to gather much more information on the orca than we could on our own.”

Members of the public who encounter a cetacean or basking shark, can contribute to HWDT’s community sightings network by reporting sightings at sightings@hwdt.org

HWDT is dedicated to enhancing knowledge and understanding of Scotland’s whales, dolphins and porpoises and the Hebridean marine environment through education, research and working with local communities as a basis for the lasting conservation of species and habitats.