TV Smith is about to tour Germany with the UK Subs, and looks set to spend most of 2015 on the road as per usual. The recent album ‘I Delete’ contains all the observation on society you’d expect and is doing well. He continues to write his tour diaries; the latest is Book Of The Year, another candid account of a year touring, warts – lots of warts – and all. In between dates, merchandising, and admin, he talks with Suzanne Kelly. 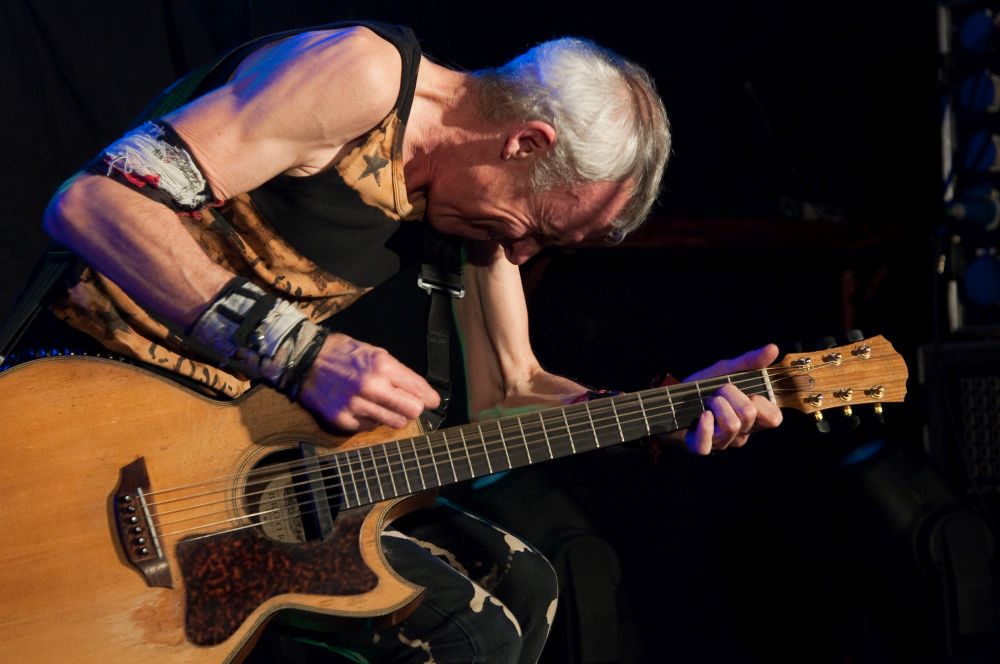 The Adverts dissembled a mere thirty something years ago, but Tim Smith doesn’t seem to have stopped touring or writing since. Before we speak, I watch a particular video of ‘I Delete’ again that I particularly like. The song speaks to me of our surveillance-happy society, personal memory overload, and the little acknowledged fact that sometimes the camera does lie or can be made to lie.

Smith’s vocals vary from quietly controlled but edgy to powerfully angry. ‘I Delete’ is the title track on the latest album – you can pick it up here as well as the tour diaries.

Around nine years ago he began publishing his tour memoirs; there are five books out now.

Aberdonians may be interested to know the latest one ‘Book of the Year’ closes with his date at the Moorings in December 2013 and his meeting Fred Wilkinson, Hen, Flash, and Flash’s sick parrot. The diary entries provide an insight into a life spent in music with a matter-of-fact humour and plain speaking, direct prose.

It’s perhaps a bit of a paradox, Smith’s music can convey such anger and frustration, yet he keeps his calm and keeps his head in situations that would tax anyone else to breaking point and beyond. For those who don’t know, life on the road for any musician is hardly one glamorous adventure after another.

Smith’s put up with late-cancelled shows, vehicle breakdowns, freezing cold hotels, disappearing sound people, kipping on floors, lack of edible food, lack of inedible food, and on more than one occasion amazing rudeness, daftness, incompetence and/or a mix of all these. If you wonder why he bothers, he’s written five engaging tour diaries that spell it out. 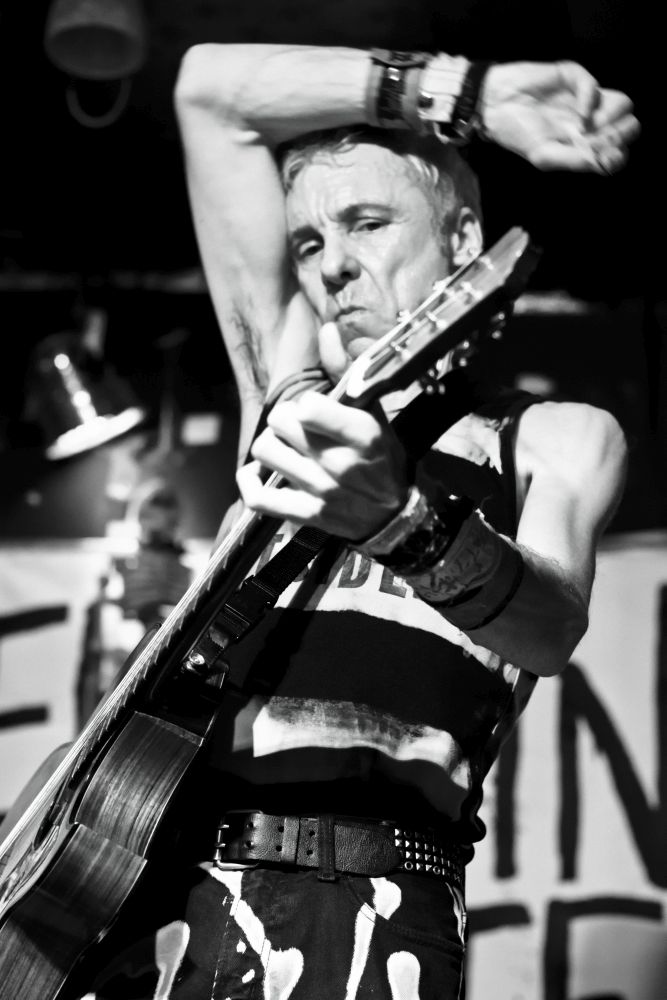 I call Tim; he’s at home after 4 UK dates with a luxurious two days to relax “surrounded by boxes of merchandise” before he joins the UK Subs European tour.

I tell him Fred Wilkinson’s tried to get Atilla the Stockbroker down here; and we both hope Tim can make it back to Aberdeen sometime soon.

He’s friendly and polite – he always seems to be.

I will say he sounds a little tired; he’s for one thing answered pretty much the same questions in interviews for 30+ years.

Added to that, his schedule would make anyone else exhausted.

We briefly talk about the phases the music business goes through, and I suggest that anyone who wants to have a career in music on their own terms is managing their career themselves.

“It’s not that far from the way punk started.” He explains.

“it’s the DIY ethic. Right back when that’s how it was. The original punks are older and smarter now. You did what you wanted to do then; that made it new and special. Gradually that DIY spirit got consumed by the industry – people see how terrible the business is now.”

We fairly naturally move to the subject of the ubiquitious TV talent shows and what that’s doing to new music and the more unusual artist.

“It’s an entertainment industry; it’s not about the music. It’s not like the ‘60s where there was at least the pretence of pushing good music.”

I ask about this new tour he’s to start with the Subs.

“I’m on a never ending tour,” [ which of course he is now I think about it a bit more]

“Another thing that’s changed – you put a record out, went on tour, did nothing for a bit, then did another album and then the record company put you out again. I do 130 dates a year. The subs tour is a bit different. 5 weeks on the trot. For most of the rest of the year it’s 4 or 5 dates here, a trip to Finland or Switzerland, then back to the UK.”

I’m thinking about his accounts of cars breaking down in the middle of nowhere, of vans laden with gear with flat tires on the way to shows, getting lost on the way to clubs, cancelled trains, planes and automobiles. Then, as often as not, the problems start when he gets to a venue – no PA, missing engineers, strange people, malfunctioning equipment – it’s enough too give anyone nightmares.

‘How do you keep your cool on the road?’ – I genuinely wonder. I think of artists I’d worked with in the past who’d get threatening if their dressing room wasn’t to their liking.

“When you set your mind to do something and it becomes increasingly obvious there will be obstacles.. equinamity takes over and you can either just get on with it, or moan and give up. There is a tendency to start moaning and whinging but then the atmosphere gets even worse. It is hard; it is soul destroying and it is irritating.

“But you have to try in retrospect to see the funny side. Re-writing what happens later is therapeutic. When the van’s broken down and it’s 25 degrees below zero in Finland and you wonder how you’ll get to the show, it’s not fun at the time. But if you lack confidence in how to achieve what you want to do, you’ll just sit and home and become a bedroom artist.”

His music has touched on virtually every modern social ill I can think of – Lies (senseless, cruel animal experimentation), March of the Giants (which I always associate with Trump), Straight and Narrow (our ‘justice’ and ‘class’ systems) and so on.

‘I Delete’ speaks to me of our CCTV surveillance society (it’s no secret I don’t think Aberdeen Inspired should track us by our mobile phones, by imagery and know how long we spend in any shop – it’s a blatant infringement of our privacy all in the name of ‘footfall’ and marketing – but is a handy tool for anyone wishing to get our details and routines – but I digress); we are apparently the most spied on nation on earth ever.

I spout a rambling question of sorts at Tim about this new song, about writing, about social commentary.

Somehow he’s made sense of where I was trying to go:

“I’m a bit shy about describing lyrics… if I could tell you where it came from I’d be doing it all the time; it’s kind of a mysterious thing. Every now and then you get a snap of an idea, you grab it roll around with it and see if something comes out if it. It’s as much a mystery to me now as it was when I started in 1975.

“I’m always getting people saying thing to me like ‘that would be a good idea for a song for you.’ But the ones that filter into your brain and spark something off and you get some poetry out of it is a completely different thing than someone demanding to know why ‘I’ve not written something about the aborigines yet’.”

“It’s not my ambition to correct injustice but to write poetry – if I can combine the two, then I’ve done the job.”

It’s not a matter for me of ‘if’ he can do the job of mixing social commentary and poetry – but how often he’s managed to masterfully do so over the decades. Another look at his website and I find the archives offer a list of some of his songs ranked by fans.

‘Immortal Rich’, ‘Gather Your Things And Go’, ‘Generation Y’, ‘Only One Flavour’ – all of this material ‘does the job’ of mixing the issues and concerns of a bewildering world with poetry. I can’t remember which tour diary book (it’ll be the first or the last) this quote is from, but at one point Smith recounts a fan saying to him “You sing about what we’re all thinking.”

All I can say is – absolutely.

It must be these kinds of reactions that makes TV Smith go out year after year on tour. It’s not the food or the hotels. But I ask him about touring all the same.

“You’re a bedroom artist if you don’t get out there. At the end of the day if you see that people have responded to your songs it makes the whole journey worthwhile. If I get to a gig after going through manic situations [and some of them sound very manic indeed] – that’s the fuel that keeps me going. When people go home motivated with their eyes shining you can’t ask for anything else – except maybe heat.”

I mention Fred Wilkinson and that Fred’s keen to try and get both TV Smith and Atilla the Stockbroker back to Aberdeen asap.

“I remember Fred – he gave me two Toxik Ephex CDs after Rebellion last year. Give him my love.”

I will do – Fred will be over the moon.

I mention that when we next get him up here, we’ve got a great place for him to stay near the Moorings; a luxe B&B where he can stay up and drink all night if he so wishes.

“I have stopped the staying with the friends scenario – I’ve stopped it because it becomes a non-stop party. People assume you’re the life and soul but when you’re doing it 130 times a year…”

I’m not surprised. In his diaries he seems to always be hunting out the friend of a friend he’s meant to stay with, finding that he’s got a kids’ bedroom to sleep in and the kids have been sent off elsewhere; dogs and cats barge into what little sleep he gets; and everyone expects that he can wake up, travel for hours, not eat, sound check eventually, play, socialise, merchandise, pack up, and then stay up all night drinking and talking.

One hundred thirty plus nights a year.

Before I let him get back to the mountains of work that undoubtedly await, we discuss a few upcoming festivals, and that TV Smith and the Bored Teenagers will play at Rebellion this year. They’ll do two sets; and TV will quite probably do an acoustic set as well. I’m just hoping that he’ll find time to get back up this way soon.

2 Responses to “In Conversation With TV Smith”