In yet another of the controversial 52 part series Duncan Harley and Janice Catto take cognisance of the political comments on a wall near you. 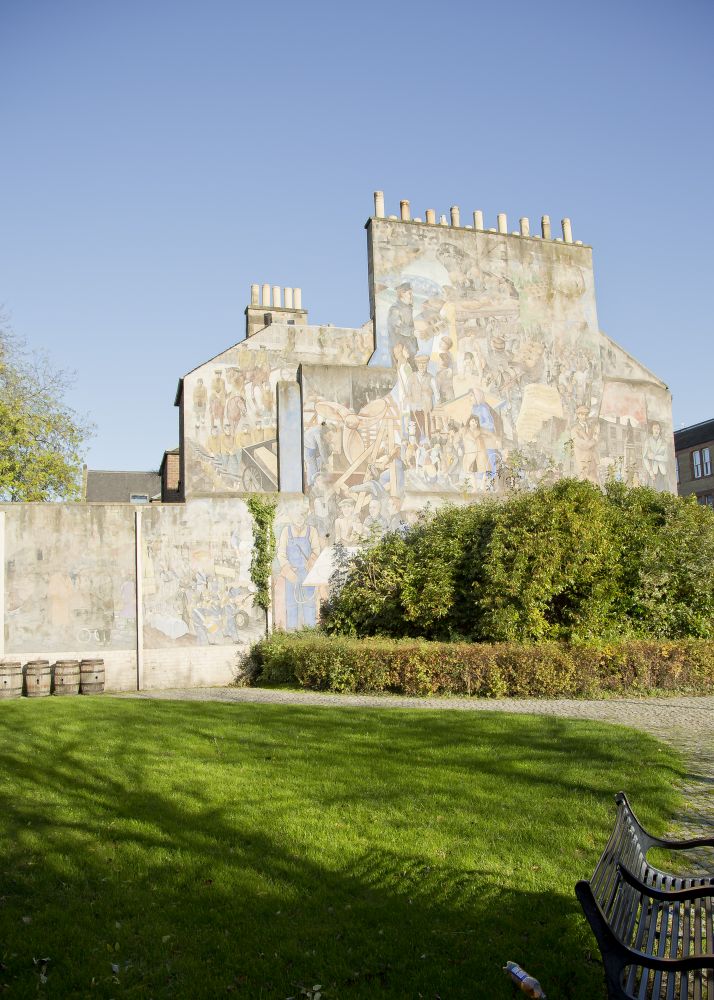 It’s more than 25 years since the story of Leith was painted larger than life itself on the gable end of a tenement on North Junction Street.

Now partly hidden behind a bush the wall art, penned by Tim Chalk, Paul Grime and David Wilkinson, went up at about the same time as the Berlin Wall came down.

At a time when the once prosperous town of Leith was at its lowest ebb, the Scottish Development Agency found some cash to fund a three-story high mural capturing the pivotal moments in Leith’s living memory.

Part of an economic re-generation programme, this gable end art piece was the culmination of a series of minor artwork programmes intended to take Leith to new artistic heights.

“It was very much the fact that Leith was going through this huge change. It had been a thriving prosperous place right through the Nineteenth Century and into the Twenties and by the time this mural was painted in 1986 it was in a really depressed state.”

Tim described the people of 1980s Leith as having a “bruised pride” as a result of the “run down” condition of the area and the questions that it presented for the future.

“There was the inevitable anxiety that the whole process was going to be a gentrification and all the original Leithers were going to be edged out and obviously there has been an element of that but I think people were looking at similar things that were happing in other parts of the country and there were a lot of understandable anxieties.”

“It was at a time when there was a strong mural movement in the country and there were a lot of us who saw murals as serving the same purpose. We wanted to produce works of art that were in public places that gave a voice to people and told their story rather than rarefied images in galleries which were purely personal views.

“The idea was to get as many voices as possible from Leith speaking through the mural.”

Now twinned with Rio de Janeiro and with the Royal Yacht Britannia hidden behind a bland shopping centre, Leith is not what it was yet again.

Mind you, neither is the faded gable end mural at the end of North Junction Street.

When we asked the staff of Leith Library about the gable end mural we wrote the following:

“In a surprise urban move, Leith library service gets asked about the 80ft by 140ft graphic on the gable end of the building on the road outside the main door.
– so what’s that wall all about?
– que?
– There is an 80ft by 140ft graphic portraying workers and shipbuilding and theatre painted on to the wall outside your door. Can you please tell me about it?
– que?

– There is an 80ft by 140ft graphic portraying workers and shipbuilding and theatre painted on to the wall outside your door. Can you please tell me about it?
– que?
– It’s huge, in fact there it is just outside your window, look at the big red flag.
– Let me ask a colleague please.

– Can I help you please?
– There is an 80ft by 140ft graphic portraying workers and shipbuilding and theatre painted on to the wall outside your door. Can you please tell me about it?
– we get asked that often. I suppose we should know.

– Let me ask a colleague please?

– So what’s that 80ft by 140ft graphic portraying workers and shipbuilding and theatre painted on to the wall outside your door, Jesus wept.

– Maybe we can Google it.

– Helen, can you help?
– Can I help with what, who are all those people?
– It’s just outside, it has a red flag and some images of workers plus some big trees. What the fuck is wrong with you people?

Should you be inspired to try your hand at wall art, an instructional video by Northern Exposure can be viewed at: https://www.youtube.com/watch?v=SeYR0vKNspQ

Next time we will be checking out the ceiling of the Sistine Chapel.

Aberdeen Voice does not condone the painting of buildings without the express permission of all relevant authorities. Aberdeen Voice accepts and welcomes contributions from all sides/angles pertaining to any issue. Views and opinions expressed in any article are entirely those of the writer/contributor, and inclusion in our publication does not constitute support or endorsement of these by Aberdeen Voice as an organisation or any of its team members. There are no figures of speech intended and no animals were exploited in the writing of this piece.