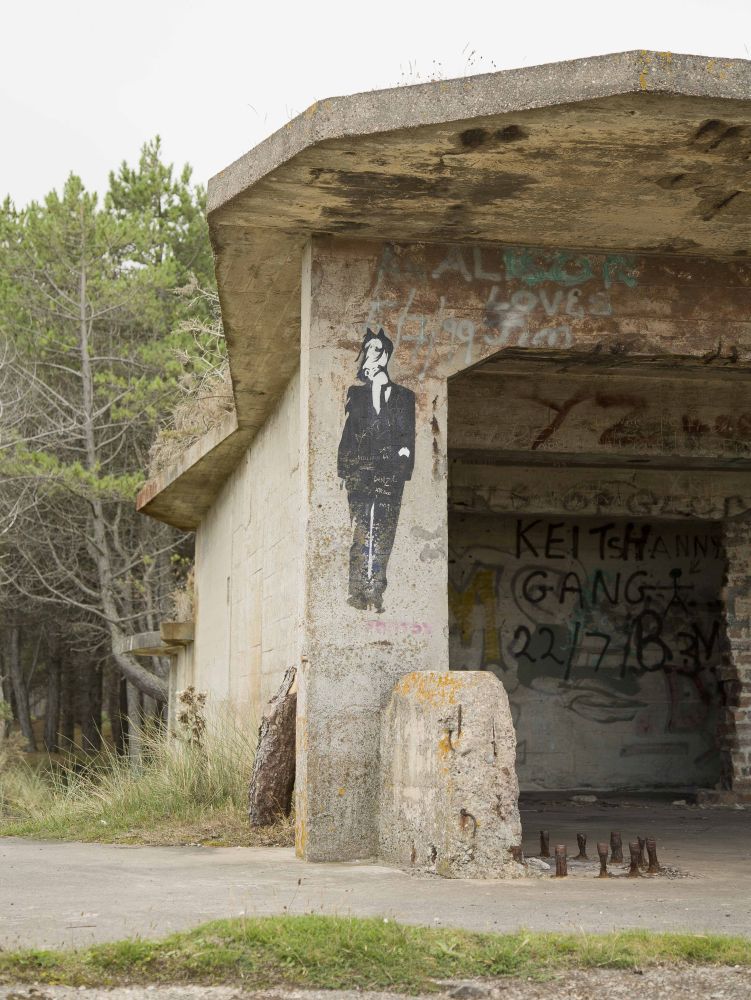 Duncan Harley and Janice Catto take cognisance of the political comments on a wall near you.

As part of our ongoing research we went off to Moray recently in the hope of meeting the artist known as Pantsy, a post-pubescent master of public wall art. A bag full of aerosols plus some cardboard stencils do not a painter make but in truth Pantsy is the biscuit.

Innes Links hosts a healthy population of red squirrels, a good few Comma butterflies and boasts a quite stunningly intact 1940’s vintage coastal gun battery facing out to sea in the direction of far off Norway.

We Scots love Norway, honest injuns, but in the dark distant days of 1940 there were paranoid fears that the Scottish coastline offered an easy landing place for Hitler’s troops.

If there had been comments on a loo wall near you in 1940, they would no doubt have read “NORWAY SUCKS –NO MORE BOMBERS PLEASE” and “FUCK HITLER UP HIS ARSE.”

Norway of course had been invaded by the German army and was now a base for the Luftwaffe bomber crews.

There are the obligatory latrines, an ammunition bunker or two, some slit trenches plus a few thousand anti invasion blocks. All were manufactured by Polish refugee troops employed as forced labour by a local building company awarded the contract for General Ironside’s 1940 anti invasion plan defences.

No invasion came by sea and the Innes Links Battery never fired a shot in anger. Hitler’s bombers however, crewed by the nice young men of the Luftwaffe, roamed the skies over the Aberdeenshire and Moray coastline killing at will for several years until it became clear that the dice were rolling against them.

In the true spirit of humanity, the coastal battery has latterly been put to new use as a place for folk to party, BBQ and have a few beers. The bland exterior of concrete painted camouflaged brown, cream and green has long faded but Pantsy and his mates have added a few pieces of colourful art to brighten up the somewhat outdated 1940’s interior décor.

Broken glass litters the embankment and the raised shingle beach hides urine filled overlapping pillboxes every 600 yards or so.  A blue abandoned sleeping bag sits facing seawards among the thistles alongside a toppled line of anti-tank defences painted with the words “The Unknown.”

Facing out to sea there are a few additional words in Polish which I am reliably informed criticise Winston Churchill for exploiting his Polish allies:

No tanks ever came ashore here although Pantsy invaded from somewhere inland in 2009.

His major work here is a devil horned black suited figure on the back wall of Battery “B”.
The gun, a first war 18 pounder salvaged from a scrapped Ironclad, is long gone of course, having been itself scrapped in 1946, however the implication of the artists mural is obviously “don’t mess wi’ us pal!”

Battery “A” sports a banal white painted “SPLAT” alongside the faded instruction to  “CHECK WITH HQ S12B BEFORE FIRING” while the rangefinder housing has the words “SHIT HAPPENS HERE” sprayed on the back wall alongside a three testicled penis.

The searchlight positions, and there are two of these, are similarly bereft. No one has so far gone to the length of even a “Mo Mo was here” statement. Perhaps true graffiti needs hidden makars.

Overall, Pantsy gets our vote for originality here since his work is precise and without equal amongst the Innes Links collection. Efforts to track him down have so far failed although, as always, our spies are out.

Next week we will take a look at Pantsy’s nemeses, pre-pubescent Giant Master Wullie.

Yours creatively, Duncan and Janice