In part one of his feature on the terror of summer 1940, when the Luftwaffe unloaded its murderous cargo on Aberdeen, Duncan Harley poked gentle fun at the contemporary media. This week, in part two, things get a bit more serious as Duncan explores the archives to make vivid the events of that fateful afternoon. 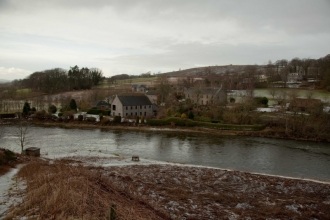 It’s the 73rd anniversary of the Battle of Britain this year.

The battle was fought over the whole of Britain between 10 July and 31 October 1940 and was probably the first occasion in the history
of warfare where two air forces literally fought each other to the death.

Many people of course will associate the Battle of Britain with Luftwaffe attacks on cities and airfields in the south of England. However, the reality is that the whole of the UK, including NE population centres Aberdeen, Fraserburgh and Peterhead came under intensive aerial bombardment, resulting in many civilian deaths and massive destruction of property.

There are many remnants of that era still around if you take the time to look for them. The Aberdeenshire coastline is littered with evidence of coastal defences ranging from anti-invasion pill boxes, also evident at many strategic bridges and road junctions, to the aptly named dragon’s teeth which blocked routes deemed to be vulnerable to sea-borne enemy tank landings.

Long abandoned airfields are still in evidence further north, such as RAF Dallachy, near Spey Bay, where dispersal areas and the original 1940s control tower can still be found.

Local archives list places which were bombed and machine-gunned from the air and the Trinity Cemetery and houses on Seaforth Road in Aberdeen still bear scars of these attacks. Somewhat worryingly, there are maps in existence which mark the positions of unexploded bombs, quite a few of which were almost certainly neither recovered nor made safe.

It was overcast with low cloud on 12 July 1940 in the South of England, but sunny and bright in Aberdeen. It was two days into the Battle of Britain and the Granite City had been attacked twice in the previous fortnight with considerable loss of life. Early in the war it had been assumed that

Scotland was relatively safe from aerial attack but the invasion and conquest of Norway in April 1940 changed that. Raiders could now reach the coast of Scotland easily, and often undetected, until they made landfall. Typical targets were shipyards and harbours both of which attracted the enemy to Aberdeen.

In mid-morning on 12 July, a flight of six duck blue camouflaged Heinkel HE111H-3 light bombers took off from Stavanger Airport and made their way over the North Sea towards the Scottish coast.

Some reports suggest that the intended target was RAF Leuchars and the harbour at Broughty Ferry, with the Tay Estuary the intended landfall, but that for some reason, possibly faulty navigation or a mid-flight alteration to plans, the attack was concentrated further north.

Whatever the truth of the matter, Aberdeen had always been a secondary Luftwaffe target at that stage in the war but on that bright summer day the bombers headed up the coast in search of the city.

The high explosive devices were dropped first to blow open buildings and allow the secondary incendiary devices to drop through the damaged roofs and start fires. But on this mission, it appears that only high explosives were carried, reinforcing the idea that RAF Leuchars had indeed been the original target with the plan of destroying the runway and disrupting fighter defences.

At 12:45, the first bombs began to fall on the Hall Russell shipyard. There was no air raid warning when the bombers approached the city from the sea. Indeed, the first anyone knew was when around sixteen high explosive bombs exploded in quick succession. The boiler shop was worst hit with around ten bombs exploding in and around it.

Many years ago, policeman’s son George Robertson told me that several dozen of his workmates had been killed while queuing to buy lunch just outside the yard. He had been a young apprentice at the time and the memory of that dreadful day haunted him for the rest of his life, ‘There were bodies everywhere,’ he recalled, ‘some minus arms and even heads, it was not a sight for any young man to see’.

It was a bloody affair indeed, and shocked the city to the core.

The bombing continued unabated with the Neptune Bar on the waterfront receiving a direct hit. In those days it had an upper floor which collapsed on to the lunchtime drinkers below, killing 40. A fragment from the bomb cut the end off the tail of the bar’s cat who went around with a shortened tail for the rest of its days.

Urquhart Road, Spa Street, York Street and Regent Walk received hits as did Kings College’s grounds, 32 George Street and 7 Roslin Terrace, where an unexploded bomb later had to be defused. The London boat in Waterloo Quay was also badly damaged, with loss of life.

As the raiders continued across the city they came under fire from machine gunners on top of the Station Hotel, which was then occupied by the military. No hits were reported.

During the attack one of the bombers became detached from the main group.

Three fighter aircraft from Dyce Aerodrome had been scrambled minutes after the first bombs had exploded. They were manned by pilots of Yellow Section 603 Squadron and led by Pilot Officer Caister. Seeing that the single German plane had become separated the Spitfires headed towards it with the intention of shooting it down. The bomber pilot, sensing the danger, headed out to sea only to be headed back inland by the pursuing fighters.

For around six minutes the game of cat and mouse was played out in the Aberdeen skies with hundreds on the ground watching the unfolding drama. Eventually, after receiving several bursts of machine gun fire and some ineffective shots from Torry Battery which put the pursuing fighters at some risk, the bomber burst into flames and began a slow but inevitable descent to earth.

None of the aircraft’s four man crew survived

Some at the time wondered if the pilot had tried to avoid crashing into houses in Morningside Crescent and South Anderson Drive.

Others assumed that he had been dead at the controls, as perhaps was the rear gunner, who seemingly continued to fire his machine gun all through the final descent. Whatever the truth is, we will never know.

The end came suddenly and violently as the aircraft’s wingtip struck a tree at the foot of Anderson Drive near its junction with Ruthrieston Road. Already alight and out of control, the Heinkel smashed into the newly-built Aberdeen Ice Rink which collapsed in flames around it.

None of the aircraft’s four man crew survived, although one was reportedly found half way out of the escape hatch with his parachute harness on. A ladies shoe was also found in the wreckage, perhaps the property of a wife or girlfriend.

In true boys own rhetoric, the newspapers of the day reported on a ‘Thrilling Dog-Fight with Spitfires’ and ‘bullets rattling on our roof like a sea of hail.’

The official record of the episode reads:

I visited the German fliers’ graves today. It’s such a strangely captivating place. Who amongst us could fail to be impressed with the Pictish stones in the roofless church above the bend on the River Don with converted mill buildings on the far bank?

Unusually perhaps, their remains were not transferred to the German War Cemetery at Cannock Chase when the conflict ceased, so they lie there still, alongside two fallen comrades from a different plane crash.

The Commonwealth fliers’ graves are there too, including Canadians and South Africans. Other graves hold the remains of two Polish Air Force pilots and even an unfortunate ferry pilot from the Royal Women’s Auxiliary Air Force.

Pilot Officer Caister, who was credited with the kill, force-landed near Calais three months later. He was taken prisoner and spent the rest of the war in captivity.

With grateful thanks to George Robertson (deceased)