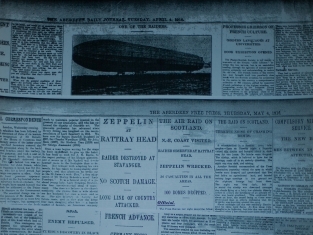 Duncan Harley writes about the 1916 terror bombing of the Garioch

In the very early years of the 20th century, the main source of world and home news was via printed newspapers and to a growing extent cinema. There was of course no television, and although radio had been invented its use was largely limited to commercial and military use.

The sinking of the “unsinkable” White Star liner RMS Titanic in April 1912 had led to the wide-scale adoption of Marconi Company radio equipment as a safety feature on passenger ships, but regular broadcasting of news and entertainment via the radio waves was still some years away.

In fact the first continuous radio broadcast in the world was a three hour programme from the American Radio and Research Company in March 1916, but it was only really during the 1920s that new technology in the form of the first vacuum tubes led to the regular broadcasting of news, current affairs and entertainment.

The age of the propaganda film had however arrived, and when Europe was plunged into war in 1914, the governments of the day on all sides of the conflict were quick to seize the opportunities which the new medium offered.

Films were produced to encourage cinema goers to buy war bonds as a patriotic duty, and countless documentaries were made to persuade the public that the war to end all wars was just and right.

Titles such as “A Goal for the Huns”, made in 1916, encouraged shipyard workers to work harder and produce more ships for the Navy, while the 1916 documentary “German Prisoners at Verdun” persuaded those on the home front that the war was already almost won and the complete surrender of “the Hun” and a quick victory was just a few months away.

In the towns and cities of the UK the news was more often than not delivered via daily newspapers and Aberdeenshire had at least two of these, namely the Aberdeen Free Press and the Aberdeen Daily Journal. During the First World War, both titles competed for readers using a heady mix of national and international news interspersed with photos of young and heroic looking troops, in full combat uniform, leaving Aberdeenshire for the trenches in France or the Middle East Front.

Other parts of these news sheets carried sad lists of the dead and missing, often with portraits of them in uniform, which must have been taken prior to departure.

The editions of these papers for the first week of May 1916 featured articles on Mr Asquith’s amendment to the recently passed Compulsory Enlistment Military Service Bill making it compulsory for all males to enlist on their eighteenth birthday “thus ensuring a constant supply of new recruits”.

Not good news for the young men and a pretty obvious indication that the war was consuming the nation’s lifeblood at a galloping rate.

There were articles on the aftermath of that Irish Easter Rebellion which Yeats so eloquently described in “Easter, 1916” with the now famous conclusive line “A terrible beauty is born.”

Lists of those Irish leaders who had been sentenced to death and then shot for their part in the uprising and even a mention of the trial in Salonika of some members of a group of Bosnian Nationalists implicated in the 1914 assassination of Archduke Franz Ferdinand of Austria which had been the spark which ignited the conflict in the first place.

The editions of both the Aberdeen Free Press and the Aberdeen Daily Journal for Thursday May 4th 1916 however carried news of a more local nature.

The war had finally arrived on Aberdeenshire’s doorstep in the form of aerial bombing by a German Zeppelin on the night of May 2nd! The headlines screamed “Terrific Noise of Crashing Bombs” and “Zeppelin at Rattray Head” with descriptions of up to 17 bombs having been dropped over the North East of Scotland in the course of the terror raid.

In reality, Zeppelin raids were nothing new to the UK mainland and in fact were quite common over parts of England and the continent, but it had been assumed that the North East of Scotland was well out of range of the raiders whose bases were in the north of Germany some 12 hours flying time away. 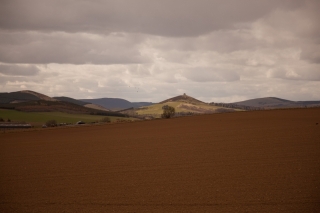 The usual targets for the German crews were shipyards and military bases but, as was the case in the second war to end all wars, the art of aerial bombing was uncertain at best and usually quite haphazard resulting in most bombs falling on civilian areas.

There had been a raid on Scotland during the night of April 2nd 1916 consisting of four airships which were targeted to attack the Rosyth naval base and the Forth Rail Bridge.

Travelling at around 45mph the 600ft long Zeppelins crossed the UK coast at various points due to having become separated en-route to the intended targets.

Exactly one month later, on 2nd May 1916, the raiders returned. The targets once again were the Forth Rail Bridge and Rosyth Naval Base, but the navigation was disrupted by stormy weather on the journey over the North Sea leading yet again to the airships becoming separated. After a gruelling 12 hour journey only two managed to actually find Scotland at all!

In what now seems a quite farcical series of events the Zeppelin L14, mistook the Firth of Tay for the Firth of Forth and dropped its bombs in a field injuring a horse.

The other, the L20, proceeded north, possibly intending to bomb a secondary target of warships in the Cromarty Firth, eventually making landfall over Rattray Head in Buchan.

The Aberdeen Free Press was somewhat restrained in its report of what happened next, no doubt to do with censorship. “Bombs Dropped in Fields” ran the headline with a description of “some windows in a mansion house and a cotter house” being “broken by the concussion” plus a description some craters in a cornfield.

In fact the raider had bombed Castle Craig near Lumsden, whose occupants had neglected to turn off their newly installed electric lights, before proceeding to Insch where two bombs were dropped in a field at Flinders. Knockenbaird Farm and Freefield House near Old Rayne were also subject to bombing although no-one appears to have been injured and damage appears to have been very minor indeed. 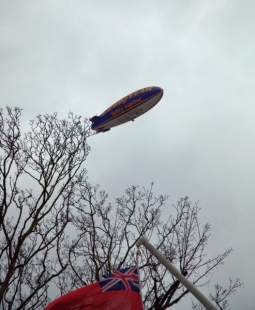 The Aberdeen Free Press reports indicated that aside from the hapless horse injured near Edinburgh, there had been 36 casualties including nine killed south of the Scottish border by other raiders but that “no person sustained the slightest injury” in the North East.

The House of Commons were duly informed by the Right Honourable Harold Tennant MP Secretary for Scotland that the “17 bombs dropped by the L20 over the Garioch on the night of 2nd May caused little damage.”

A lucky escape indeed for the North East although the events of the second war would prove much less fortunate when Aberdeen suffered repeated bombing from the Luftwaffe, but that is another story.

The eventual fate of the injured horse is not recorded but the outcome for the Zeppelin L20 certainly is. After yet again becoming lost it headed out over the North Sea in an attempt to make landfall in Norway.

The L20 eventually ran out of fuel just off the Norwegian coast near Sandnes.

On May 3rd 1916 The Press Association reported that,

“Zeppelin L20 was reported this morning at 10 o’clock over the Southern part of the Jaederin coast. The aircraft flew slowly towards the north and came nearer and nearer to the coast, which it eventually crossed. It then passed at a low altitude over the country as far as Halsfirth where it came down in the water. The Zeppelin appears to have been damaged and it is reported that the crew jumped out of the gondolas into the sea near Hinna”.

Seemingly most of the German airships crew of 16 survived to fight another day having been rescued by local fishermen. However a Norwegian officer set the wrecked airship aflame with a well placed shot from his flare pistol thus ending what had been a quite farcical episode in the history of aerial warfare.