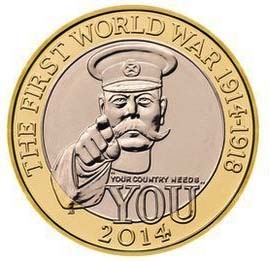 Lord Kitchener is to be featured on the new Royal Mint £2 coin.

Kitchener drowned after his ship was sunk at sea on the 7 May 1916 but in some quarters the man is still celebrated as an heroic general who rallied the nation to send the youth of Scotland to their deaths in the madness of the trenches of France and Belgium during the first years of that war to end all wars.

Thought by some modern thinkers to be a thoroughly nasty man, in 1898 he famously sent a force of 8,200 British troops equipped with modern weapons against 20,000 Sudanese citizens and a few thousand or so Egyptians on dromedaries up the Nile to destroy a town in the Sudan by the name of Omdurman in a revenge attack for a previous British defeat.

Sven Lindqvist, a Swedish historian, has pointed out that the decisive battle of Omdurman was fought in the name of civilisation but nobody in Europe asked how it came about that 15,000 Sudanese were killed while the British lost only 48 men. Nor did anyone question why almost none of the Sudanese wounded survived.

In his book ‘Exterminate All the Brutes’ Lindqvist refers to some sad and shameful 19th-century newspaper accounts of British massacres of wounded Sudanese after the battle.

Maxim machine guns, lack of any medical care or indeed any victuals for prisoners plus sharp British bayonets may have been the weapons of choice, however the British resolve for HRH Queen Victoria and her then imperial empire, was almost certainly the prime motivation for this quite appalling pre- WW1 slaughter.

In that dated and historically inaccurate film The Great Escape, the German prison commandant advises the British Senior Officer that 50 of the escapers were shot while attempting to flee Nazi Europe and that their personal effects will be returned to the POW camp.

On the 26th of January 1899 at the ‘battle’ of Omdurman’s conclusion, Winston Churchill wrote to his mother with the message that:

“Our victory was disgraced by the inhuman slaughter of the wounded and Lord Kitchener was responsible for this.”

Kitchener’s influence over his contemporaries remains undeniable. Throughout his life and well beyond it, even those who knew him best, such as his school friend Raymond ‘Conk’ Marker, invariably seasoned their affection with a curiously resonant awe:

“In this age of self-advertisement there was always a danger that Lord K. with his absolute contempt for anything of the kind, and his refusal to surround himself with people who attract attention, would not be appreciated at his real value but I think the country recognises him now.

The more I see of him the more devoted I get to him. He is always the same – never irritable – in spite of all his trials, and always making the best of things however much he may be interfered with. As Chamberlain said, “to praise him is almost an impertinence.”

Many of us Scots are of the opinion that the new Royal Mint £2 Lord Kitchener coin is unworthy of the memory of our dead ancestors and is quite shameful.

Worth refusing perhaps should you be given the opportunity.

Should you agree, there is a petition at http://www.change.org/en-GB/petitions/royal-mint-replace-the-kitchener-2-coin-with-one-that-truly-commemorates-the-millions-who-died-in-the-first-world-

Should you disagree there is a Lord Kitchener appreciation society at http://www.kitchenerscholars.org/pages/khartoum.htm .

7 Responses to “A Bad Coin”