On the Eve of Armistice Day and in the year before the 100th anniversary of that war to end all wars, Duncan Harley reviews Andrew Davidson’s new book which details the story of Fred Davidson, Andrew’s granddad, who against orders, took a camera to war. 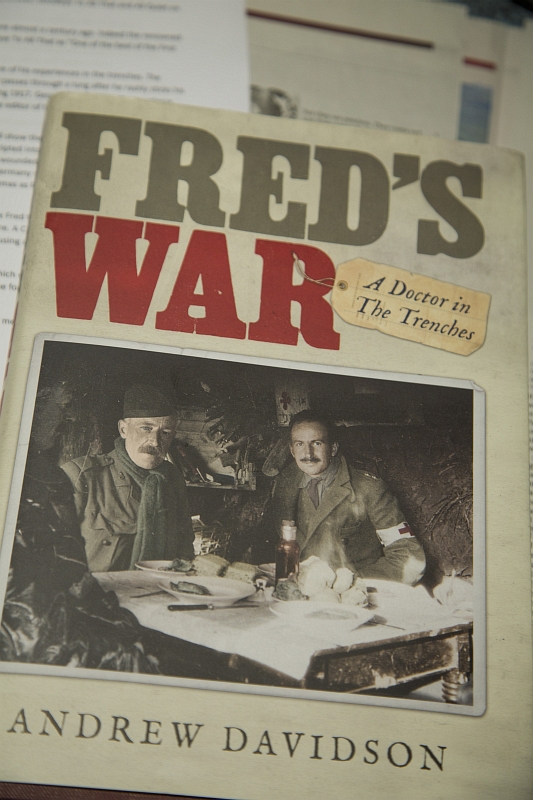 As one raised on titles such as Memoirs of an Infantry Officer, Goodbye To All That and All Quiet On The Western Front, I was excited at the prospect of viewing the First World War through the lens of a serving soldier, albeit a Medical Officer enlisted in the Cameronians.
The promise of a journal-type narrative enriched with over 250 original photographs seemed promising indeed.

Sassoon, Graves and Remarque had covered the genre almost a century ago in traditional narrative style. Indeed Philip Toynbee once described Robert Graves’s Goodbye To All That as ‘One of the best of the First World War autobiographies’.

Sassoon, of course, paints a hauntingly- beautiful picture of his experiences in the trenches.

The narrator, George Sherston, is wounded as a bullet passes through a lung when he rashly sticks his head over the parapet during the Battle of Arras in 1917. George is sent home to convalesce, and in another rash moment, arranges to have lunch with the editor of the Unconservative Weekly. The reader is left to wonder, what could possibly go wrong?

As for Remarque, day-time television channels still show the 1930’s film adaptation of his classic novel to this day. Born on 22 June 1898, he was conscripted into the German army at 18 and spent just six weeks in the trenches before being wounded by shrapnel. He was repatriated to an army hospital in Germany where he spent the rest of the war.

His classic narrative remains in print and a film for TV re-make was made in 1979, starring Waltons actor Richard (John Boy) Thomas as Paul Baumer and Ernest Borgnine as Katczinsky; it remains an unsurpassed classic.

Fred’s War has an unromantic title, probably deliberate given the rather earthy nature of the subject matter. Written by Andrew Davidson and lavishly illustrated with Fred Davidson’s actual war photographs, the narrative traces the young Fred’s path to France and his eventual return to Britain after being wounded.

The brave Fred is a newly qualified doctor from St Cyrus. His war turns out to be a great adventure. A Cameronian and later an Old Contemptible, he took pictures of his surroundings using a camera smuggled to France in a medical bag.

The narrative is full of descriptive elements many of which may be based on conjecture or on fellow officers’ journal entries of the time. On Christmas Eve the following exchange seemingly takes place,

‘Tommy, Tommy why do you not come across?’

‘Cause we don’t trust you, and you hae bin four months shooting at us’

Fred’s life in the trenches is described in some detail despite the author revealing,

“He never talked about the wars he fought in and the friends he lost. But he did pass down the items that now sit in front of me: three photographic albums and a set of binoculars monogrammed FCD. He also left a framed collection of medals – now replaced by replicas, the originals having been lost to the family.”

Through the diaries and memoirs of Fred’s fellow officers we learn that, following Royal Army Medical Corp training, Fred is sent to join the Glasgow-based Cameronians (Scottish Rifles) at Maryhill Barracks. He quickly equips himself with an imported Buster Brown folding camera to augment his medical kit and begins taking portraits of fellow officers posed in the doorways and streets of Maryhill.

War breaks out after the assassination of Archduke Ferdinand in Sarajevo by the Black Hand, and in August 1914 the battalion is stationed beside the Conde-Mons Canal with orders to hold the position against the German advance at all costs.

This is actually a relief to many of Fred’s fellow soldiers who had feared being sent to Ireland to suppress the Irish unrest and defeat the Ulster Volunteers.

There follows a predictable description of the grim reality of static trench warfare, complete with blood, suffering and lice. Constant shelling, freezing conditions and trenchfoot abound. Mud, excreta and rats feasting on corpses are all around.

In terms of photographic content, this is a really interesting book. The images do indeed tell the story of a man despatched to war complete with a bellows camera. The monotone shots provide the reader with a unique insight into the day-to-day reality of what it was like to be there on the battlefield in the early part of that European war almost one hundred years ago.

The description of officers shopping for shirts and underwear defines the book well.

“Most of their kit has gone missing, cast off in the frantic retreat. Outside the railway station, they see a captured German Hussar officer marched under guard, tracked by a hostile French crowd, baying like dogs. Still no-one knows what will happen next.”

The title page proclaims: Fred’s War – A Doctor in the Trenches, an apt summary perhaps. This is after all a description of static warfare at ground zero.

In terms of historical perspective, it is perhaps a dull book. In terms of revisionist history, it says little which is new. The narrative promises much but delivers little except anecdotal diary-based material.

The strength of this book is in its images. Most have been unpublished until now and many show the same scenes then and now, a nice visual touch, allowing the reader to understand the changes in landscapes and townscapes since The Great War.

If you are a fan of the images of war, then this may be for you. If more serious history is your forte, then check out your local library in the next few months to see what else is on offer.

2 Responses to “Fred’s War – A Doctor In The Trenches”