On Friday 7 June 2013, Grampian Police surrounded an empty flat on a curious tip-off that someone with a gun was inside. The owner George Copland was arrested elsewhere on Sunday 9 June. The police spent days tearing his place and his possessions to pieces, leaving an impassable mess behind them. Released without charge, he has had absolutely no help with clean-up and no apology.

Having visited the property at the end of October, contacted the police and Aberdeen City Council, Suzanne Kelly reports. 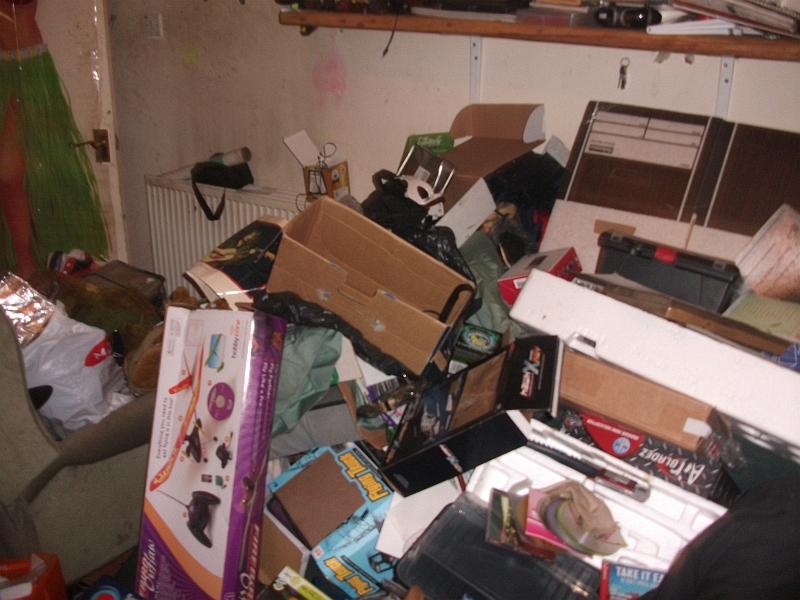 George Coplands property thoroughly searched and left in a heap. This scene is repeated throughout the house.

George Copland is not well; this is no surprise. He was unjustly, as it transpires, arrested after Grampian Police dramatically lay siege to his empty flat, cordoned it off for days while conducting a destructive search that yielded no evidence of gun crime or any other crime.

He was arrested on the following Sunday even though there was no evidence of any crime, held for some 12 hours, and released without charge.

He is also without explanation, apology, any form of clean-up and any compensation.

Freedom of Information requests have been lodged for details of the arrest, siege and search. The police have not given any comment on the situation.

Normally if someone is the subject of a destructive, intensive, intrusive search and no wrongdoing is discovered, they are entitled to compensation and to having the property restored to its former condition.

And what a condition the flat is in.  George gave me a tour – as far as was possible.  I was not able to fit into parts of the premises for all of the possessions, many broken, strewn throughout.

It seems items were removed from the loft, examined, and left.  Items such as CDs lie around an emptied CD rack, many broken. George enjoys playing with remote control toys; some of which are – or rather were – worth a fair amount of money.

“See this car; it was in perfectly good shape,” he tells me, holding a large, clearly intricate radio-controlled car; its front wheels are missing and it seems to have been crushed.

“They must have stood on it to break it.”

“I’ve had to see my doctor; this is really too much.”

“I tried to send photographs of the damage to WPC Niki Trower (an officer who seems to be involved with the case), but she says she can’t access the photos I’ve emailed for security reasons.” 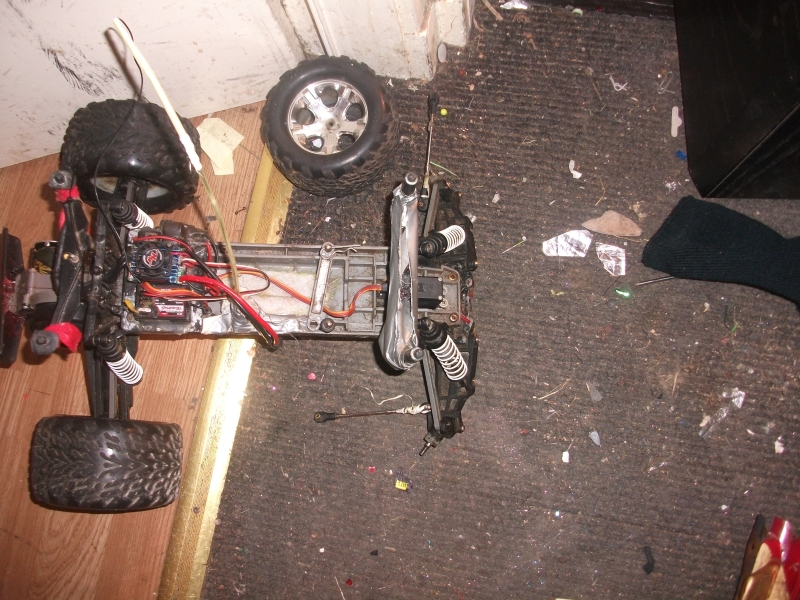 I trust WPC Trower will look at these photos. This is how a man with mental health issues has had his flat left for four months after a raid which arguably should never have happened.

When I visit the house, it is clear that anyone claiming a gunman was inside must have gone up close to the windows: what made the witness or witnesses make such a claim? What led them to look into the windows?

The house is attached to another house, but its windows are not exactly on the beaten path.

The part of the house which is visible from a distance over a grassy area near Provost Rust Drive does not even have any windows.  The window near one of the two doors to the flat only has small windows, and unless someone specifically went to the back of the house and peered in, there is no way they would see anything there.

Then we come to the other door. The main entrance to the flat is down a short path, and past the other attached house. Unless someone were coming to visit the other house and continued on to George Copland’s front door and peered in the windows, they would not readily see anyone.

“I had aeroplanes hanging up in the bathroom; they were taken down and thrown in the bath”

Everywhere is the sight of broken toys and goods, some smashed, some clearly deliberately dissembled – while police apparently looked for an invisible gunman with non-existent guns.

Famously (as reported in The Sun), the police apparently  tried to suggest to Copland and get him to agree that a remote control and a feather duster could have been taken for weapons. Who was meant to be brandishing the imaginary weapon or even the feather duster is still a mystery, as we know as the police knew when they arrested Copland the flat they surrounded for 8 hours was empty. 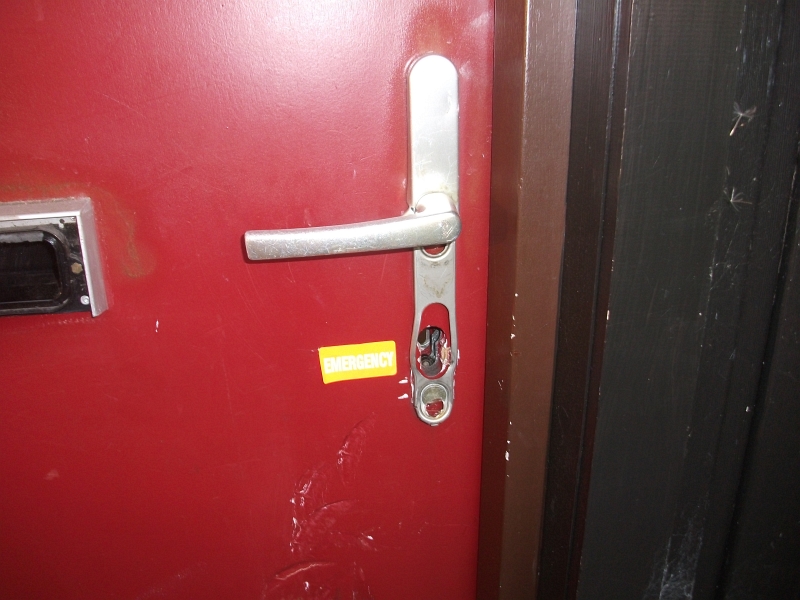 George does not have a copy of the police report yet, but the police are, perhaps unsurprisingly, adamant that the siege was justified and the witnesses were trustworthy.

Aberdeen Voice will report further on the details when they are released.

Turning again to the main entrance door – it had been broken in, and is now bolted into place, unusable. If there were a problem such as a fire (not inconceivable, given the state of the place) there is only one exit now where there would have been two.

The windows are too high to be utilised for the purpose of fire escape.

The Council have been approached about their failure to mend this door; apparently it takes weeks and hundreds of pounds to get a specialist door like this replaced.

This raises some interesting questions about procurement, keeping spares around, and how we wound up with such an expensive item with such a long lead time on the City’s budget. Let’s hope no other vulnerable people need a replacement door in a hurry.

In terms of expense, the siege and search will have cost the taxpayer a considerable sum.

Surely the responsibility for having misjudged the situation so badly sits squarely with the police, and restitution, if not apology, are long overdue.

There seems to be nothing the Council can do about the mess and destruction; this indeed should be resolved by Police Scotland immediately. 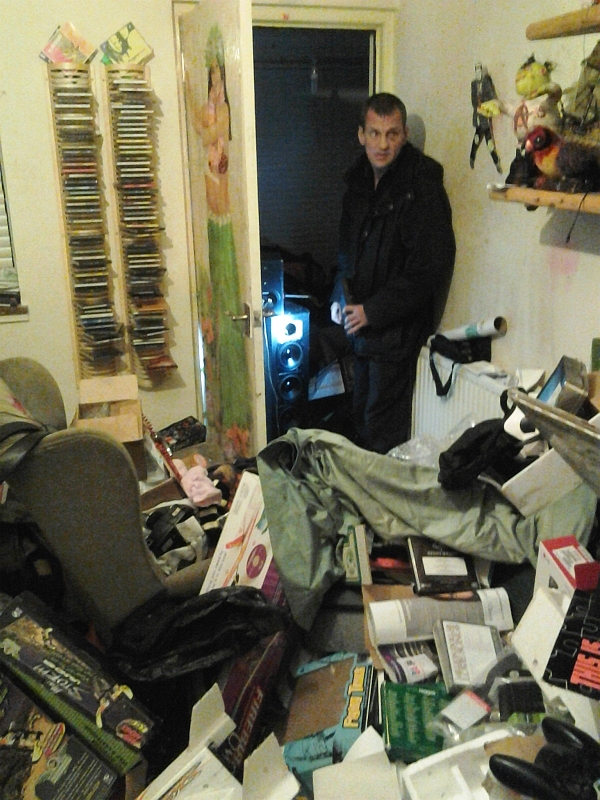 Too much time has gone by; too much stress has been caused.

The Police will be put on notice that a formal complaint and legal action will be started if there is no positive development forthcoming.

One anonymous donor has come forward; others who wish to support any legal action are welcome to contact Aberdeen Voice for details.

Some politicians have been trying to help, and it is appreciated, but so far, nothing has changed for George, except that the strain is causing his health to deteriorate.

If we don’t live in a police state, let’s prove that now, and get Copland the help, flat clean-up and restitution he is clearly due:  NOW.

One Response to “Siege Of Heathryfold: Devastation, But No Compensation”