He Ain’t No Good, the Locust Honey String Band’s debut CD, drew loud noises of appreciation on its release in Autumn 2012. Those who have maintained interest in this Asheville, North Carolina trio were pleased when a UK visit was announced, and Northeast fans were delighted when Glenbuchat Hall on beautiful Donside was among the venues booked to host the Honeys. David Innes’s trainspotterly local geographical knowledge was called on as he set off to review the show for Voice. 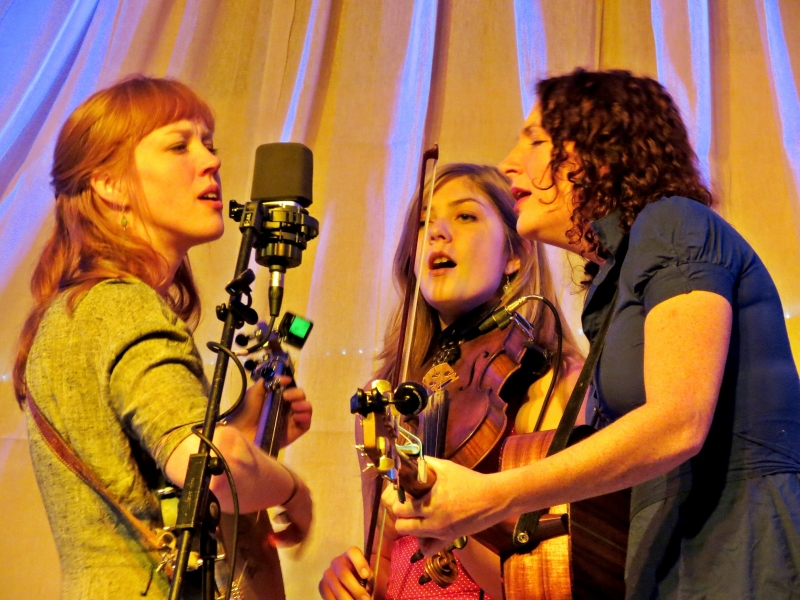 The choice of venue is interesting. There seems to be a new circuit developing for up-and-coming touring acoustic acts in the Northeast, with The Tin Hut, Gartly and Portsoy’s Salmon Bothy becoming established as intimate but lively venues where local friendliness and fine hospitality help attract promoters and artists.

Gigs are invariably well-attended, a sign that these often-forgotten communities are appreciative that acts are making the effort to bring their music to the people.

Co-operative community values are what drive the volunteer management of these venues, and that gladdens even this bitter old cynic’s excuse for a heart.

By the time that Chloe Edmondstone (fiddle), Ariel Dixon (banjo) and Meredith Watson (guitar) took to the Glenbuchat stage, around 120 old-timey fans had arrived, to the delight of the band and organiser Steve Cameron.

Armed only with their acoustic instruments and a single condenser microphone, the Honeys demonstrated why a community will turn out in such numbers on a frosty November Monday to gather in a remote glen in the Cairngorm foothills.

Barely stopping to draw breath, Meredith and Ariel incessantly created driving rhythms atop which Chloe’s expressive old-timey fiddle lines danced. The entire Glenbuchat turnout was loudly expressive in its approval. When the Honeys gathered around the microphone in two or three-part harmony, the effect was glorious, whether offering their own songs, ‘When The Whisky’s Gone’ and ‘How You Must Have Felt’ or their takes on others’ material. 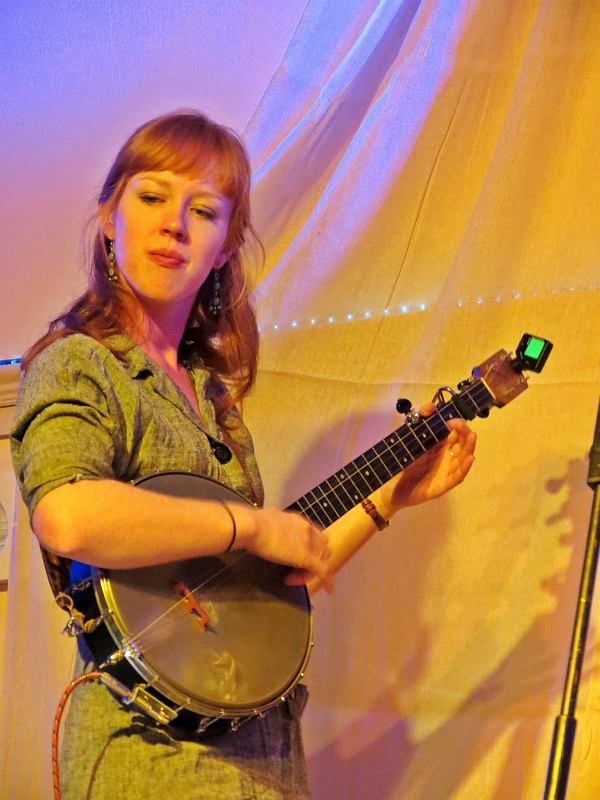 Of the latter, The Mississippi Sheiks’ ‘Sitting On Top Of The World’ and the marvellous travelogue ‘Banjo-Pickin’ Girl’ were standouts.

These are players comfortable with each other.

Their enjoyment is as palpable as the audience’s.

The music is introduced and supplemented by self-effacing humour and a stock of anecdotes.

We heard about their innocently singing an impolite song about policemen when busking, and being eyed by the officers of the law; about ill-fitting charity shop dance shoes, and Ariel’s suffering for her art as she demonstrated her Green Grass Cloggers steps; and a child’s description of Kitty Wells’s definitive ‘Walking After Midnight’ as ‘weird’, after he’d feasted on the He Ain’t No Good version.

By the time the raffle had been drawn and the t-shirt competition (yes, really) completed, Glenbuchat was dancing.

Literally, as a dozen or so twitchy-footed Buchateers stamped some sort of jigging/flinging/hot-stepping Terpsichorean improvisation at the back of the hall.

With the news arriving by text that the Dons had just gubbed Partick Thistle 4-0, I was almost tempted to join in.

That this can happen on a cold Monday night in a remote Aberdeenshire glen is a tribute to admirable rural community values and the stirring tunes and affable charm of The Locust Honey String Band. Haste ye back.