With thanks to Aberdeen Women’s Alliance. 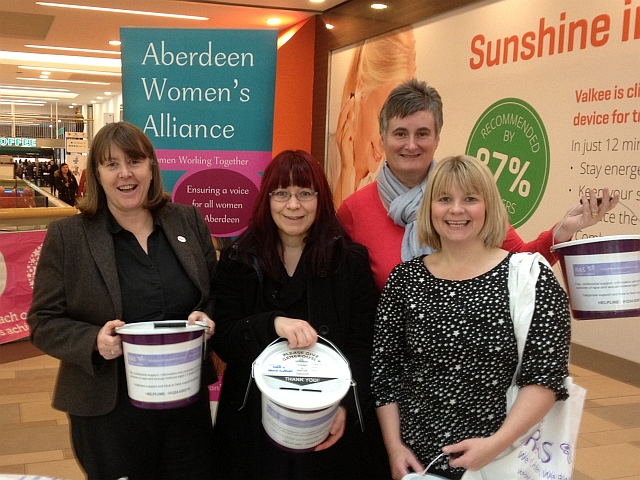 On Saturday, Aberdeen Women’s Alliance (AWA) marked the United Nation’s International Day for the Elimination of Violence Against Women by collecting donations for local charity, Rape and Abuse Support (RAS) in Union Square.

International Elimination of Violence Against Women Day is marked annually by AWA to raise awareness of the forms of violence that women locally and around the world are subject to.

By highlighting this particular day, AWA aim to draw attention to the scale and true nature of violence against women, most of which is hidden from public view.

“Recent figures from Police Scotland show that offences of domestic violence in Aberdeen have increased by 36 per cent and there has been a rise in reported sexual assaults. It is, therefore, vital that we all continue to raise awareness of violence against women and we were delighted that so many people took time out from their Christmas shopping to speak to us about these issues.

“Through the generous donations we received, we raised £189.90 which will support the excellent work that RAS do to inform the public of the nature and extent of sexual violence as well as broadening understanding of how appropriate responses can be developed to prevent it.”