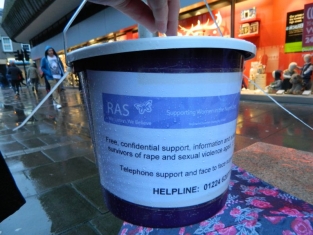 To mark the United Nations’ International Elimination of Violence Against Women Day, Aberdeen Women’s Alliance (AWA) took to the streets to collect donations for Rape and Abuse Support (RAS).
They also took the opportunity to discuss with city shoppers the recent funding issues experienced by the charity and the importance of the service it provides.

AWA chose to fundraise for RAS following news earlier this year that the charity’s Scottish Government funding had been cut by 50%.

Director for the charity and member of AWA, Kathryn Russell stated:

“Despite the weather, we had a great turn out from members of the AWA and were delighted by the generosity of Aberdeen’s Christmas shoppers.

“Sexual violence is a crime which can have a devastating impact, and it is crucial survivors have access to appropriate support and help following a rape or sexual assault. That’s why it’s essential that we retain the important service provided by RAS in the North-east.”

Following fears that the rape crisis centre would have to close after Christmas, RAS successfully raised enough funds to ensure its immediate future. Donations are still required, however, and those wishing to donate can do so at:  http://www.justgiving.com/rapeandabusesupportaberdeen