Well, that’s Offshore Europe over and done with for another two years, and yet again it was a relative success, writes Fin Hall. 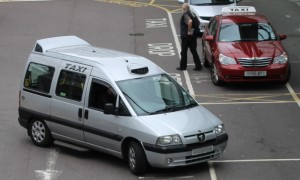 The word relative is important here.

Thousands upon thousands of visitors, mainly males in light blue shirts, descended on the city and its surroundings, spending their company’s money on taxis, buses, restaurants, bars and ridiculously overpriced hotels.

There were keen ones taking photos throughout the city to show to their spouses and some might have bought a souvenir or two, if they were able to find the time between meetings, cocktail parties and free dinners.

After all, they were on business trips, and not (ahem…) an all expenses-paid party trip.

Personally, as a taxi driver, I thoroughly enjoy the experience, apart from the traffic jams of course, and not just for the extra business to my trade, although that does help.

I enjoy meeting people who tend to be here for the first time and are interested in hearing about the history of the city, and are fascinated by the grey granite buildings which look so much better in the really good weather that we had during the this year’s show. Some have even made up their minds to return for a holiday break with their wives.

There seem to be mixed feelings about the actual exhibition itself. Some say they don’t really enjoy attending, but do so because their boss tells them to, whilst others don’t mind at all. Some really enjoy it and get a lot out of it.

The general consensus is that there is very little, if any, business done inside the marquees and buildings, where the focus is mainly on a great deal of networking, exchanges of business cards and putting faces to names. There’s a lot of and catching up with old friends and making new ones.

I have been told that most solid deals and promises are done over dinner or, believe it or not, in the taxi queue.

But everyone agrees that the city makes them feel welcome and whole experience is really well run.

As yet, nobody has explained why the gates were locked

To return to the term ‘relative’ in relation to the Exhibition’s success, there were a couple of black marks against this year’s proceedings.

First was the well-publicised locking up of one of the overspill car parks, not only because cars were still awaiting to exit, but, for some inexplicable reason, concrete blocks were dumped on the ground inside the gate. This occurred after a car went on fire in the area, causing two hour delays, resulting in an extensive line of traffic.

This chaos was heightened by the fact that the Dons had scheduled a match against Viking FK of Stavanger with a 1900 kick off time.

As yet, nobody has explained why the gates were locked when cars were still inside. I know that the sign said that the car park was scheduled to close at 1900, but surely anybody with half a brain would have been aware of the situation? Also, what was the idea of putting the concrete blocks in place? I am aware that normally this empty lot is kept blocked off to restrict entry to it by travellers, but surely with 24 hour security in place, the need for laying blocks was totally unnecessary?

Not to worry though, the police finally managed to get somebody to nip over and relieve the blockade. After much persuasion, he grudgingly did the business. At 2300.

As for the P&J, I believe it was, pointing out that amongst the cars trapped inside there were even ‘Mercedes and Land Rovers‘.

How puerile and sycophantic was that? Should we be impressed or feel even more sorry for those vehicle owners than for the guys involved in the lock-in who had Mondeos or Skodas?

An edition of Aberdeen Voice seemingly cannot be published without the council coming in for criticism. This time, it is to do with their efforts in trying to lay on some free events for the visiting masses.

First of all was the three-day closure of Belmont Street for the country fair, which ran from mid afternoon until nine at night. On passing several times, it looked less than mobbed, although it was hard to differentiate between folk actually at the market and people coming and going from the street’s pubs and cafes.

Why they insist on blocking off thoroughfares for this and the pseudo-continental market, when they have a ready-made market stance at Castlegate, and the larger Union Terrace Gardens, still mystifies most folk

The second laid-on event turned out to be an even bigger waste of your council tax, and that was the non-advertised free music shows held in the quadrangle of the Marischal College.

These concerts, which some of you may still not be aware of, consisted of an international evening, a Scottish evening and a jazz night.

Another faux pas here by our city fathers. Never mind that they seemed not to let anyone know about this, they decided to start the shows at 1800 and run until 2100.

This is really anything but an ideal starting time. It’s even worse than the free match at Pittodrie, since the exhibition didn’t end until 1800, and the taxi rank generally cleared of the remaining stragglers around 1945.

After a busy day, and before dining, the exhibitors and the visitors probably needed at least a half hour rest. So maybe if someone in the corridors of power, had really thought this through, then 2000 would have probably been a more sensible start time.

I picked up a man on Wednesday night who had been performing at the Scottish event, and he said that there were only around thirty people at the show. He also said that the line-up was ‘crap’, although he did use a stronger term to describe his fellow performers.

On passing the Thursday event in my car, it appeared that the jazz evening had a slightly larger audience than previous nights and there were even some people dancing. But overall I don’t think the term ‘success’ can be used to describe what should have been an entertaining affair.

Finally turning to my own profession, whilst most taxi drivers come out to provide a good service, and, yes, to make some extra cash, others decided that, and I quote, ‘I couldn’t be bothered’. Again, a stronger word was used.

What? You couldn’t be bothered providing a service? Couldn’t be bothered making some extra cash? Oh I see, it’s the idea that the regular Joe Public is being neglected whilst all attention is aimed at the high rollers. Well, in fact, the taxi companies make a point of servicing both their regulars and the visitors, being aware that once the Exhibition is over, life goes on.

It is unfair that some deride the industry which has helped stabilise the city through some lean years, when other cities have suffered high unemployment. The oil business is far from perfect and some feel that it should have been doing more for the city and the populace, but maybe history is to blame for that.

When the big companies first came here and wanted to build, the then council should have said, ‘OK, but first you must do THIS for the town’.

Is that too naive? I don’t think so. When Stewart Milne wanted to develop at Portlethen, Aberdeenshire Council insisted that his company build a new underpass and road system, which he did.

Contrary to this, many years ago, when a company moved into the big house on Howes Road and turned it into an office block, warehouse and yard, they applied to the council to build a road linking their new premises to Lang Stracht to save juggernauts trundling through the housing estate where children would be playing. Unsurprisingly, the council declined their offer.

I realise that this seems to be ending on a negative note, and that really was not my intention. I really wanted this to be a relatively positive piece. Hey, there’s that word again,

So what lessons should be learned from this week?

First of all, obviously, when organising something, make sure that it is well-advertised and that citizens and visitors are aware of it.

Secondly, organise events to start and finish at reasonable times and have them somewhere people passing by will come across them, like the top deck of St Nicholas Centre, or even Union Terrace Gardens.

And finally, make sure there are security or police at every car park exit until all the vehicles have departed.

One Response to “Offshore Europe – A View From The Taxi”