Residents, supporters, and Aberdeen Voice contributors attended the Trump International Golf Links Scotland exhibition of its proposed Macleod Course on the evening of 20 August, 2013.  For now, let’s just say the red carpet wasn’t exactly rolled out to welcome them. The most important issue is that you now have a chance, whatever side of the bund you sit on, to voice your opinion on the proposed second course – a course that apparently will be directly adjacent to Balmedie County Park. Suzanne Kelly reports. 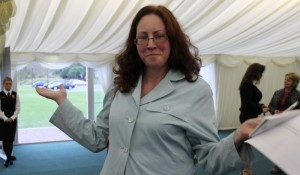 Suzanne Kelly fights her way through the hordes.

The venue for the exhibition of the proposed second course was the temporary marquee adjacent to the temporary clubhouse in the
not-to-original-spec Trump parking lot, bordered by the high bunds, which were never approved in their current form, and are now
higher than before, near Leyton Farm Road.

Trump’s parking lot wasn’t exactly filled with visitors when we arrived around 1900.

The most shocking feature is that this course is apparently going to border Balmedie Country Park. How this will work in practice environmentally, or take into account the safety of park users who don’t wish to be knocked unconscious by flying golf balls, seems to still need some consideration.

Local residents I spoke to were shocked, and believe their neighbours will be too.

In a forthcoming article we will cover the treatment meted out by those who were on hand to answer questions, but right now, Voice readers are encouraged to examine the contents of the presentation and submit their comments as soon as possible. ‘The deadline for responses is 27 August 2013’ reads the two-page Exhibition Feedback Form.

Whether this means by midnight on 26 August, by the close of business on 27August, or by midnight that day, is not clearly stated. Those who wish to make a submission, therefore,  should do so as soon as they can.

The room had a number of round tables, adorned with golf magazines, Trump writing paper, pens, and the feedback forms. Sarah Malone was there, as was a bouncer who towered over my 5’11” height, and a dirty-blonde woman who emphatically refused to identify herself.

She did, however, look strikingly similar to Ann Faulds to some visitors, best known perhaps, for apparently feeding Dr Christine Gore of the council with advice and opinion when planning permission for the complex was initially sought. Details of this are in past issues of Voice and in other news sources. Also present was a man, presumably Hawtree, the course designer.

Comment forms and photos of the presentation boards can be found at http://suzannekelly.yolasite.com/ 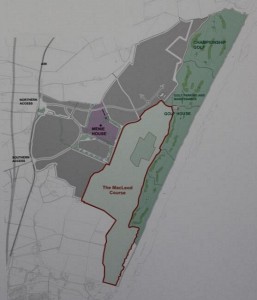 Proposed layout of the new course

There will be a wider consultation in due course, the Shire council taking comments and objections when these plans are submitted, but putting your thoughts on record now with the Trump Organisation is strongly advised for those who have an interest.

No comment will, in all probability, be counted as ‘no objection’. I urge everyone to make themselves heard.

Anyone wishing to see the exhibition for themselves should take note. It is not accessible via public transport, unless you are willing to walk from the bus stop for at least 20 minutes to get there.

Is this deliberate? The low key publicity and the low budget nature of this exhibition and consultation exercise suggests to me they would prefer if people did not visit and ask questions.

Why was it not held in town?  The public could have seen what happens when you ask questions, like the sniggering when we were there between Malone and Faulds (if it was Faulds), the Faulds-lookalike shutting down any answers, and Malone’s behaviour; the public also may have wondered why a huge security guard was required.

22 Responses to “Second Menie Course: Less Than 7 Days To Respond”