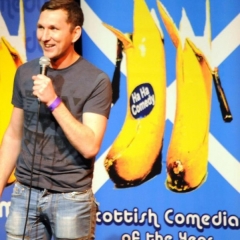 I had delved into the world of comedy once before at Korova but was unprepared for the barrel of laughs that awaited me at The Belmont Picturehouse, given that this was meant to be breathing space for amateurs trying out untested material.

…and all for the fat sum of absolutely nothing.  They say you get what you pay for; in this instance I got much more, and got my ‘time’s worth’ too.

Vincent Price, relatively new to comedy, was compere as the ‘Red’ and ‘Green’ teams battled it out for comic supremacy.  Member of the audience were to lift either a Red or Green card depending on which side’s performance they preferred.

A quirky fellow, he declared his love for all things Crystal Maze, as Scott Ironside did The Karate Kid at Korova weeks before.

From Eighties films to Nineties television shows, the distance between the two is as much as that between Korova and The Belmont Picturehouse itself.  It’s a generation thing, man.  At least he wouldn’t be standing in front of as many blank, young faces.

One of the biggest laughs was his discussion of eccentricity; which he inimitably likened to being slightly crazy, yet very wealthy.  In other words, you’re a dirty bastard if you’re a layman distinguishing fires with your own piss; but a duke doing the same would just be a rogue.

Patrick Brusnhan teamed up with Sarah Clark on the red side of the room; and Peter Wood and Robert Starr were green, good to go and ready to kick-off the debate – the only comedy debate in Scotland.

First was the pertinent issue of horse meat in Tesco burgers.  Wood in favour, and tongue in cheek, said he couldn’t be bothered with famous smug vegetarian bastards, namely the brontosaurus.

Price later remarked that he could have said Ghandi or Hitler, though maybe the flippancy of it all was lost on him?

So Wood instantly got everyone on side, and although Brusnhan got laughs comparing the majesty of a horse to that of the rather boring bovine species; he was left standing, dust in face, and last, in this particular horse race.

Now for poetry.    Starr for its abolition, versus Clark for its retention.

Starr, undoubtedly funny and very clever, said things that were over my head, in the least; though the crowd thought differently.

However, Clark was quick on her feet, and encouraged crowd participation.  Thought to be caught on the hop when urged to rhyme upon the poetic significance of shoes, or rather a shoe, she came up trumps with witty couplet.

Not one for screaming hilarity, but mournful.  Quite sad, the lonely shoe.  The crowd, registering surprise, applauded because it was inappropriate…and very funny.

Next up was the ultimate comedy bugbear, a profitable one at that.  That of America.  Obesity for Wood, and Mormons for Brushan.

Being a Catholic, Brusnhan was able to lay into them, or rather, Mitt Romney, with a veracity and intelligence that had most in stitches.

Swearing,  stock and trade for many a comic, usually works fantastic for broad Aberdonians like Wood, but the fat jokes took a while to get off the ground, and consequently flagged a bit.

The biggest challenge of all, it seemed, was the ‘change’ game.  The participants were given a topic, and, at the behest of compere Price, they had to change their opinion on that topic at the drop of a hat.

The speed at which these mental gymnastics were urged, was at times more apt to that of the flash of a blade.  Consequently, the crowd got some of the biggest laughs out of a mixture of on-target rapid fire, and participants shooting oneself in the foot.

To ‘change’ upon the subject of dancing for Wood was no problem, he having, infamously, once been a member of a Logie-based boy band.

The frenetic manner in which he’d chop between slick choreography, and impassioned hatred of all things ‘feet to the swing of the beat’, was a consistently arresting spectacle; if not always entirely on-point in the humour stakes.

Then came time for Starr to shine.  He had to ‘change’ upon hitting the gym.  This time round, sheer enthusiasm shot him through, with press ups and pull ups to aid his story.  Not one for being upstaged by the dance moves of Wood, he pushed valiantly to get the laughs and succeeded.

For Brusnhan to ‘change’ upon cars was as hard for him as it is to change the tyres on his old banger.  He cursed Price for stealing his thunder.  That being that in the latter’s introduction he revealed to the crowd Brusnhan and his car troubles.

A faltering start, no doubt unaided by the precious seconds Price had stolen, soon gave way to punctuating silences with the names of car parts and other randomly shouted car-related jargon; this time aided by a sympathetic Price.

A bit of a car crash to watch; but at the same time very funny, despite his piece not going to plan.

Even Clark had to admit to herself that the cut and thrust of having to ‘change’ rapidly upon that most Scottish of traditions, the kilt, was most taxing.  She did well, but the biggest laugh came when she had to admit she wasn’t too sure if she were for or against the customs of her homeland.

Before the tiebreaker, the big guns came on for some proper stand-up.

Robert McKelvie came on to ponder NetFlix, an online television watching phenomenon these past few years.  He was very confident, articulate and commanded the stage quite well.  It was clever how he compared his resultant fixation with Dexter and the prompting of NetFlix to watch that one more episode, to the affliction of chasing the dragon.

The heroin-esque overtones were clever, and enjoyed by many – not so much myself.  It seemed to raise fairly serious, though admittedly skewed for comic purposes, issues of how NetFlix invades privacy with automatic updates on Facebook of how you’ve been watching Dexter at half four in the morning…

Apparently it was his first ever time onstage, so it was fantastic in that respect.

Gregor Wappler came on afterwards with a set similar to that performed at the aforementioned Korova event.

With the final act over, it was time for the anticipated tiebreaker.  Your erstwhile reviewer couldn’t resist, when the crowd were urged to choose the subject matter for winner-takes-all, shouting “Danny Glover”; for his name had been called elsewhere earlier on and had been ignored.