Divisive an issue as the proposed development of Union Terrace Gardens proved to be, there was always going to be an unfortunately high number of Aberdeen citizens left disappointed – whatever the outcome. One such disappointed citizen shares with  Aberdeen Voice readers her view regarding key decisions taken by Aberdeen City Council on Wednesday 22nd August. Amanda-Jaied McCahery writes: 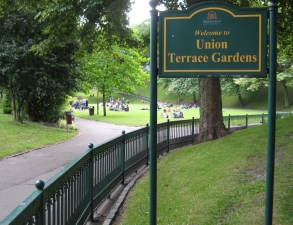 I have never been one to get involved with politics in the uber-sense of the word.

Obviously I know that every aspect of life in this country is shaped by politics, and of course I vote whenever I get the chance, but unlike some friends it has never been a major talking point in my life…until now.

I live in Aberdeen: a beautiful city filled with gorgeous things to see and do, surrounded by the most stunning countryside that Scotland has to offer.

Just yesterday a few friends and I took a beautiful 16k walk along the gorgeous sandy beaches near the city, just because it was such an amazing day and we didn’t want to waste the views.

We have lovely parks and gardens and even when the rain pours, which is much of the time, the city sparkles and makes you feel lucky to live in such an amazing place. Then the council sticks its nose in and you feel slightly ashamed.

In recent years many people have decided to invest millions of pounds in our city, despite the current economic climate. Plans for bypasses, new football stadiums and city centre civic areas that will bring in more money, jobs and tourists have been the source of huge debate.

The Aberdeen Western Peripheral Bypass Route has been all but buried under tons of red tape, caused by appeal after appeal. This article is about Union Terrace Gardens, however, and a little about Calder Park.

For those of you that don’t live in, or have never visited Aberdeen, and I implore you to come and visit as it is truly a great place to be, Union Terrace Gardens is a 123-year-old sunken garden in the heart of the city.

It was originally a small river valley that has taken on the form of an amphitheatre since the addition of a viaduct at its northern end and the development of the covered remains of the old Denburn Terrace. It is a great place to sit and enjoy the sun, when we get it.

The Bon Accord crest depicted in flowers, beneath the latest addition of the official Diamond Jubilee design is still one of my favourite Facebook pictures and the Gardens are still my first choice when the sun comes out, despite the fact that my back garden looks out onto acres of gorgeous green fields.

However, as with any out of eye-line areas, Union Terrace Gardens does have a seedy reputation.

Famous for harbouring many of the city’s undesirables, and not the safest place in the dark, this setting is largely ignored for most of the year and 52 percent of the people that voted for it think that it is about time that the heart of the city started beating again.

Sir Ian Wood, one of Aberdeen’s and in fact Britain’s richest sons, has been at the forefront of the City Garden Project, pledging millions of his own money to the redevelopment, and bringing in investments from some of the area’s biggest businessmen.

Plans for a number of different ideas for the gardens were shown to the public and a winner was chosen.

The Aberdeen voting public said yes and everyone was wondering when the awesome new centre, filled with cafes, bars, art galleries and a concert area, as well as an outdoor winter ice rink, was going to come to fruition…and then Labour took over the council.

This news came today in the same way that every decision so far has come, surrounded by controversy and debate. 22 members of the council voted to disregard years of design, planning, voting and spending, leaving 20 members and a large part of the city’s population seething and confused as to why we were asked in the first place.

And then to add insult to injury Mr Crockett then decided that he didn’t think the Calder Park development was a good idea either, and that Aberdeen Football Club should continue to play in a stadium that they first used in 1903 and was last renovated 19 years ago.

So Union Terrace Gardens looks set to remain a sunken, largely ignored beauty spot with a bad reputation, and The Dons look set to continue playing atop a 113 year old dung heap.

It seems that Labour aren’t fans of change, but what they need to realise is that the citizens of Aberdeen aren’t fans of being ignored, and I am sure this debate it sure to rage on for years to come.

Unfortunately, for now at least, it seems that the heartbeat of this great metropolis is doomed to plod along with the outdated visions of the men in charge.

13 Responses to “Union Terrace Gardens: The Debate Rages On.”