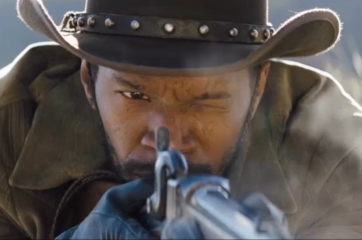 I was fairly looking forward to this, despite being amongst what I would consider contemporary cinema snobs.  You know the type. The kind that actually liked Inglourious Basterds!

Django charts the freedom of a black slave (Jamie Foxx) and his bid to save his wife from a similar fate.

I took awhile to warm to Waltz’s character, and found him rather too smug and politically correct.  However, his unflappability throughout the duration won me over.  This was as such that my lack of vocabulary would call it dastardly, a sort of cunning you’re glad to see in a good guy.

Even towards the end, when he appears outfoxed and nothing more than a sullen loser, you literally see the cogs in his head turning.  Viola!  He’s back on top of his game and anyone in his way, between him and glory.

He’s employed by the government to hunt down their ‘most wanted’, dead or alive.  He agrees not only to, as I’ve said, train up, as he christens him, Mr. Freeman; but to also help Django recover his wife from the evil clutches of plantation owner, Calvin Candie (Leonardo DiCaprio).

Being a Tarantino film, there’s liberal lashings of the corporal kind, as well as derogatory and racist language.  All of the time in question, of course.  Letting dogs loose on a runaway slave was one of the scenes a bit harder on the eyes.

This wasn’t all without scandal, of course.  My pal told me that Quentin had been much criticised for the scene which appears to show an embryonic gathering of Ku Klux Klansman.  Apparently this isn’t historically accurate.

Fair play to the guy, though, he tried to make light of it.  One of the assembled goes off in a huff, due to the lack of appreciation towards his wife’s work, that being the eye holes for the sacks hauled over their heads.

Personally, I found this scene to be milked far beyond its comic worth.  There are scenes in the film infinitely funnier than this, namely the introduction of Samuel L. Jackson’s character, Mr. Candice’s head butler. 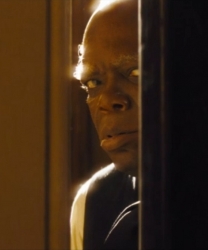 The comedic chemistry between Foxx, DiCaprio and Jackson, when freeman and servant meet for the first time, is priceless.  The latter is outrageously funny, a boundless man despite his fragile frame leaning heavily upon a walking stick.  You struggle to see how such an opinionated man could be servant to anyone, let alone a plantation owner.

It’s actually only later on you discover his loyalty to his master.  I suppose this is testament to the complex characters on show, in this violent romp.

Furthermore, he’s actually instrumental in blowing the cover of the two, aforementioned renegades, who come to Candice’s with supposedly unrelated business to avoid arousing suspicion.

Prior to this prelude to a seemingly unhappy ending, though, laughs can be found in the strangest of places.  In fact, it comes right at the start when Freeman is still a slave, his freedom bought by the blast of Schultz’ gun.  A cannon, more like it.

Seriously, seeing is believing and the way this gun despatches with half a horse and its rider is side splitting…and although there are no ‘fountains’ of blood, as it were, the embellishment of guts and gore is hyperbole in the extreme.

Also look out for the impossible angle of trajectory in which a certain woman falls upon herself, cue gun blast.  That definitely got one of the biggest laughs of the night.

Having said that, the one criticism I would make about this film is its length.  It seems, as I try my hardest not to give too much away, that the film was extended in order that it reach its logical conclusion.

Albeit, Foxx’s character upside down with his dick chopped off would’ve been an absolutely horrible note to end on, but I, in all seriousness, turned to my mate and said there’d either be a sequel or, at this rate, the film would end up being about four hours long!

All in all, other highlights included the standoff prior to Django’s capture and his subsequent return to the plantation to save his wife.  The common denominator in both, of course, is the reason why most people should’ve been coming to see this.  Guns and guts!

Tarantino’s no fool, though.  A keen observer will have noticed that gore isn’t all he’s got eyes for.  Notice the unyoked horse, as Foxx frees his fellow slaves.  Maybe this is just coincidental, maybe Freeman doesn’t like saddles.

Doubt it, though.  Excellent film.