There are three films I’ve really enjoyed this year, all seen at Vue.  Prometheus comes tops, easily, along with Batman: The Dark Knight Rises, an unexpected surprise for me. And then there’s Looper. So says Andrew Watson who mans the Voice celluloid review desk this week. 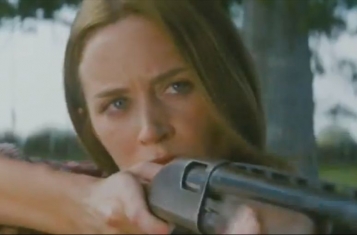 Looper is a mind-bender, with a script that twists and turns to its conclusion I will try to do its complexity justice without giving away too much of the plot, to help give you the will to stick with it until the very end.
Joe, played by Dark Knight Rises actor Joseph Gordon-Levitt, ekes out an existence as a mercenary of sorts.

He obliterates, from point-blank range, mob hits teleported from the future into the present and is more of a dispatcher than mercenary. He disposes of the bodies and therefore any evidence connecting his criminal employers with these disappearances. One of the corpses is actually Joe’s future self, played by Bruce Willis!

Very early on, I was quite impressed. Maybe I’m a bit dim in this respect, but I was honestly trying to see where Bruce Willis’s character would fit into the storyline. Joe seemed like the bad guy in the trailers, but would he turn out to be the cold-blooded killer, albeit complete with three-dimensional, if not redeemable, traits?

Thankfully, there are varying degrees of good and bad between his present and future selves; neither character, as the scales weigh alternatively up and down throughout the film, seems dastardly enough to make such judgements anything but a close call. All part of the film’s complexity.

All films need lighter moments and Looper has them. Jeff Daniels, best known to me for Dumb & Dumber, plays head minion Abe, who only lords it over Joe and company in the present because his superiors in the future have positioned him there. He doesn’t quite convince in displaying the menacing aspects of his character and is perhaps deliberately cast in the role for that reason, funny being something he does well.

His poor son, some slack-jawed paragon of ineptitude with a large gun, acts as his foil in a way you’d think Daniels’ comic sparring partner of yesteryear, Jim Carrey, could just about replicate. Both, particularly Daniels, are reminiscent of the perennial jobbing actor, desperate to avoid being bullied into typecast roles over and over again.

How can actors like John Goodman, for example, play roles like badass black market gun dealers in Kevin Bacon’s Death Sentence when they’ve already starred as Fred Flintstone? Probably not Goodman’s finest performances, but certainly the two I seem to remember.

I suppose, paradoxically, that the little comic nods here and there give a sense of reality, despite the film being way, way into the realms of science fiction.

Life’s not all doom and gloom, and we don’t inhabit a world where people want to be super-serious and watch films like Inception all the time.

Don’t get me wrong, that’s a fine film but my only reservation about Looper was that it would surely just be another Inception? There are similar, intertwined aspects in both films, but, thankfully, another Inception it isn’t.

Rounding off my attempt to sell you this film, I feel you should know that thematically it tackles some of my favourite subjects, including the nature versus nurture debate.  There’s a chosen one in the film too and Looper also tackles the fate versus freewill argument. Is it destiny to save or wreck humankind, or can conscious efforts be made to change a supposedly inevitable future? The way these two issues are conflated appealed to me immensely.

On the other hand, some of the dialogue is clunky. Swearing should be an art form, not something thrashed through by tongues of unthinking thespians, and there’s a Freudian slip by the scriptwriter implying accidental incest. I’ll let you weather that storm, one of many, lateral and literal; yet one of few that’s aesthetically offensive to the filmgoer’s eye.