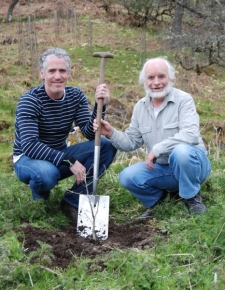 With thanks to Richard Bunting

Conservation charity Trees for Life has begun 2013, the Year of Natural Scotland, with the welcome news that acclaimed wildlife cameraman and filmmaker Gordon Buchanan has agreed to become its new patron.

Through the role, the well-known Scottish broadcaster will raise awareness of Trees for Life’s award-winning restoration of the Caledonian Forest – Scotland’s equivalent of a rainforest – and its unique range of wildlife.

Gordon’s inspiring work – including on Big Cat Diary, the Lost Land series, and the hugely popular Springwatch and Autumnwatch – has seen him become a household name.

His career has taken him across the world, memorably including a year spent with a family of black bears in Minnesota, USA, for the documentary ‘The Bear Family & Me’.

“I am proud to be a patron of Trees for Life, as they are the spearhead of native woodland restoration and conservation in Scotland. Their tireless efforts over the last two decades have created an expanding home for thousands of important species, breathing new life into one of the world’s most magical forest habitats,” said Gordon.

“We are delighted that Gordon has agreed to become patron for our charity. His love of the natural world shines through all he does. His high profile, together with his passion for wildlife and Nature, are sure to attract further support for our work, which will be very good news for Scotland’s Caledonian Forest.”

Last May, Gordon planted Trees for Life’s Millionth Tree at a special ceremony at the charity’s Dundreggan Estate to the west of Loch Ness, in Glen Moriston. At the time he described the Caledonian Forest as “a wild place at its most wonderful”.

Gordon – who currently lives in Glasgow – grew up on the Isle of Mull, with a love of the natural world that was inspired by Sir David Attenborough’s work. Trees for Life is restoring the Caledonian Forest to a spectacular wilderness region of 1,000 square miles in the Highlands to the west of Loch Ness and Inverness.

Only a fraction of the former forest now survives, but the charity has planted more than one million trees at dozens of locations, and has created 10,000 acres of new forest. It has pledged to establish one million more trees by planting and natural regeneration within the next five years.