With thanks to Richard Bunting 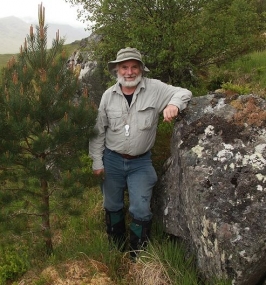 Alan Watson Featherstone, founder and executive director of conservation charity Trees for Life, has been shortlisted in The Environment category of the prestigious Glenfiddich Spirit of Scotland Awards 2012.

The awards mark the achievements of individuals who provide inspiration through outstanding contributions to Scottish cultural life. The categories commemorate all that is great about Scotland, and this year cover Art, Business, Food, Music, Screen, Sport and Writing as well as the Environment.

People are invited to vote for their preferred winners by post or via the Awards website with voting closing on November 14 2012.
www.glenfiddich.com/spirit

Details of shortlisted nominees are appearing in The Scotsman Magazine each Saturday during the run-up to the awards ceremony on November 29 in Edinburgh.

“Being nominated for this award is an honour, and it’s a recognition of the importance of Trees for Life’s work to restore Scotland’s ancient Caledonian Forest,” said Alan.

“Every tree we plant will provide a habitat for some of Scotland’s remarkable biodiversity, and brings new life to the stunning wild landscapes in the Highlands. Our project celebrates people’s ability to create far-reaching positive change, despite major threats to Nature and humanity such as climate change, environmental degradation and habitat loss.”

The Caledonian Forest once covered much of the Highlands. Today only a fraction of the original forest survives, but Trees for Life is restoring the forest and its unique wildlife to an inspiring, spectacular wilderness region of 1,000 square miles to the west of Loch Ness and Inverness.

Since 1989, the charity has created almost 10,000 acres of new Caledonian Forest at 45 different locations in the Highlands. It has planted more than one million trees, with a million more pledged for the next five years.

Alan’s wide-ranging, long-term work to change humanity’s impact on Nature and the planet has also helped to provide inspiration for ecological restoration projects in the Scottish borders, on Dartmoor in England, and for the endangered Parana pine forest in south east Brazil.

People can support Trees for Life’s work by purchasing dedicated trees to celebrate births, weddings and special occasions, as well as memorials to loved ones. A tree will also be planted for every recipient of a new ‘plant a tree’ winter gift card this Christmas and winter.

By 1991, Trees for Life had begun to plant a new generation of trees

Trees for Life’s story began at a major environmental conference in Findhorn in October 1986 when Alan Watson Featherstone – who at that time had no experience of conservation work, no funding and no access to land – made a commitment to delegates to launch a project to restore the Caledonian Forest.

The forest had once covered much of the Highlands, with native pinewoods encompassing 1.5 million hectares at their maximum extent, in a wild landscape of mountains, lochs and rivers. By the 1980s, centuries of deforestation – largely a result of human activity such as land clearance, wood use and farming – had taken a huge toll, with only a tiny percentage of the former forest remaining.

Practical conservation work began in June 1989, when Alan took a team of volunteers to place tree guards around Scots pine seedlings in Glen Cannich, to protect them from being eaten by deer. By 1991, Trees for Life had begun to plant a new generation of trees, some of the first to grow in the Caledonian Forest for 150 years.

Trees for Life – whose vision also includes the reintroduction of the forest’s wildlife and plants, to form a fully-functioning ecosystem – has since grown into an award-winning charity, with a dedicated staff team, hundreds of volunteers and thousands of supporters. In 2008, it bought the 10,000-acre Dundreggan Estate west of Loch Ness, one of the largest areas of land in the UK ever purchased for forest restoration.

The charity’s awards include 1991 UK Conservation Project of the Year, the Millennium Marque in 2000 and Top 10 Conservation Holidays worldwide in 2009. In addition, Alan received the prestigious Schumacher Award in 2001 for ‘his inspirational and practical work on conserving and restoring degraded ecosystems’.

One Response to “Trees For Life Founder Shortlisted For Major Award”