Resident Evil: Retribution, on release at Aberdeen’s Vue Cinema, has its moments, but, latterly, seems to descend into realms of the ridiculous, a departure from the franchise’s previous four outings, writes Andrew Watson. 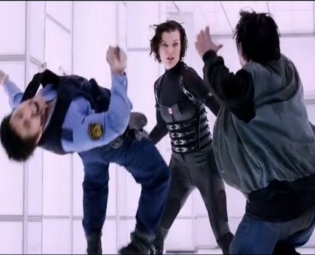 I hesitate to describe it as a saga, because this film is principally a money-making exercise; one which doesn’t seem to have the decency to stay even remotely faithful to the B-movie but superbly intriguing plots which unfold on your computer screen.
However, this is the most successful and highest-grossing video-game-to-silver-screen adaption ever and one should expect consistency with the four other films in the series.

In that sense, Retribution delivers – plenty of stunts, swords, goring, guns, beasties, beauties and a good dose of apocalyptic foreboding.

The strikingly and unusually beautiful Milla Jovovich plays Alice, a former employee of the Umbrella Corporation who sets her sights on nemesis Wesker, a man to whom, in a perplexing sense, she is grateful. In the previous film, Afterlife, he has injected her with an antidote to the zombifying T-virus that reverses her superhuman abilities. Her chemical and physical reaction to the biohazard is a miracle in the story’s scope of modern medicine yet it helps her become and feel more human. Awww….

Films aren’t films without twists, though, and Alice, captured by Umbrella for the umpteenth time, finds herself in a compromising position which necessitates the help of Wesker, who, since Afterlife, has severed ties with the company. Not exactly the most trusting person at this juncture, Alice resigns herself to a fate in the hands of the perpetual and proverbial devil’s advocate. And so it goes, until the end. Let’s just leave it at that.

When the plot sags, when eyelids are drooping, when your boredom-dependent insanity is fighting and winning against every other impulse in mind, body and soul, the moments of comic relief somehow bring clarity to vision. Without sufficient prescription of hilarity, you’ll be as well signing up for the T-virus and becoming a zombie yourself. Because let’s face it, you are one in all but name

Did this film deliver laughs, then?

To be honest, the film wasn’t that bad.  Believe it or not, this film tricked me into believing it really was absolute crap, rather than decidedly average, and that’s why I’m giving this film a kicking!

You see Michelle Rodriguez already died in the first film. So what the hell was she doing in this, four sequels later, and not as a rotting corpse? “Hah, bet they’re running out of money; using the same actors and actresses to play different characters,” I deducted.

Perhaps giving away too much, even about a bad or decidedly-average film, is unfair, but when a kid, knowing glint in the eye – OK, that last part isn’t true – tells Michelle’s character that her sister isn’t a particularly nice person, you know you’ve been hoodwinked.

Audience? Laughing. Me? Scraping the egg off my face.

The only thing funnier than this, though, is the ending. An ending, tragically, delivered in all seriousness. Think Resident Evil 6: Dungeons, Dragons & Castles.

Seriously, though, if you want an action film with big dollops of horror thrown in the mix, you’ll probably enjoy it. I enjoyed it in that sense. However, if you’re somehow hoping for an overhaul of an already-established franchise, one which has resolved to undo all past wrongs in one fell swoop, and with sublime attention to detail of the video game series, then you can forget about it.