With thanks to Bex Holmes. 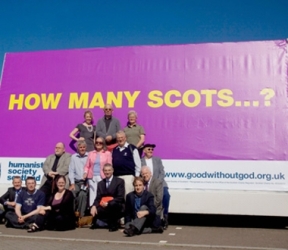 Aberdeen was one of five locations across Scotland where the Humanist Society Scotland (HSS) shot a series of short films to show what humanists believe.
The films cover a wide range of important moral issues, including physician-assisted suicide, sectarianism and same-sex marriage and feature more than fifty people – from 10-year-old Mellin Buchanan (Thurso) to 81-year-old Margaret Ferguson (Inverness).

The films can be viewed at the society’s H Factor campaign site http://www.thehfactor.org.uk/ where they can also be downloaded and shared on social media sites like Facebook and Twitter.

Among the contributions in the film on humanism, Alex (Edinburgh) says:

“As far as I am aware, no humanist has ever killed anyone because of their beliefs”.

Among those commenting on physician-assisted suicide Catriona (Aberdeen) says movingly:

“We had to watch my granny die over a period of months, in pain, and wasting away in front of us when she’d told me years ago she’d had a great life and she was ready to go. Why can’t we afford people the same compassion that we show to our animals?”

“We’re delighted with the H Factor films.  They show that humanists are deeply committed to making the world a better place.  Humanism is becoming daily more familiar in Scotland.  But, although our ceremonies grow ever more popular, very few people actually know what humanists believe.  In these films they can see for themselves and many of them may realise that, without knowing it, they’ve been humanists all their lives.”

The HSS is also inviting members of the public to win £1,000 by creating a new slogan for the society in an online competition hosted at the H Factor site.
http://www.thehfactor.org.uk/

The Humanist Society Scotland is a charity founded in 1989 and currently has more than 7,000 members.   Christopher Brookmyre is its president and distinguished supporters include Stephen Fry, Richard Dawkins, Professor James Lovelock and the novelist Iain Banks.

The Society aims to represent those in Scotland who choose to live a moral life without religion. We have a network of trained Celebrants who carry out non-religious ceremonies such as funerals, weddings, baby-namings etc.