Trade union and community organisation members from the North-East join a demonstration against austerity.  With thanks to Brian Carroll, Chair/ President of Aberdeen Trades Union Council 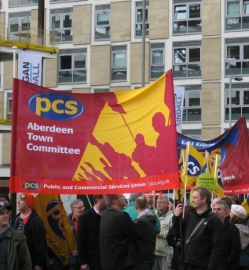 Over 10,000 demonstrators gathered in George Square in Glasgow, from 10 o’clock onwards last Saturday morning to send out a message to the Government –

“ Stop what you’re doing or the economy will implode!
“Stop messing with our pay, pensions, terms and conditions!
“Invest in the future of our country and start investing for jobs, services, protecting those most in need – the youth of today!”

That is what is needed for a fair, just, equal, modern and diverse society and that is what Government should be delivering on.

This was a day which saw the people of Britain join people in Greece, Portugal, Spain, Italy and France in saying ‘NO’ to austerity.

“Give us Investment NOT austerity!  Austerity isn’t working!”

All major Unions, community organisations, activists and the general public were represented on the march, as was “Youth Fight for Jobs”, intrepid youngsters who had marched to Glasgow from Stirling

It was a great day with PCS (Public and Commercial Services Union) Scottish Secretary, Lynn Henderson stating at the rally, to huge cheers and applause from the crowd: