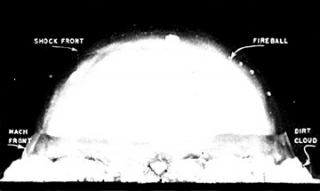 The first damage comes from the explosive blast or fireball which takes place immediately after impact. The shock wave of air from the blast radiates outward, producing sudden changes in air pressure, thus demolishing large buildings, while people and smaller objects are destroyed by the wind.

Raymond Briggs, author of Children’s picture story book The Snowman, also produced a cartoon book about nuclear war called When the Wind Blows which is well worth a read. 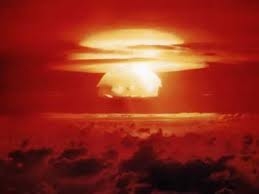 The size of the fireball depends on the size of the bomb used. The effect of a one megaton is initially 44 ft. across but in ten second moves to 5-700 foot. Just imagine the effect of 1,000 megaton Nuclear Bombs!

If the bomb explodes above ground and then expands until it hits the ground, a second, faster wave of pressure is formed.

When this catches the first wave the two waves join together; the pressure then becomes twice that of the initial blast. 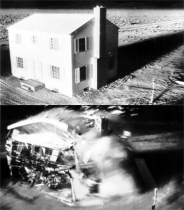 People are actually quite resistant to direct blast effects.

The danger comes from the collapse of buildings, which leads to people being crushed, suffocated, or left with serious injuries which frequently result in death.

Emergency health services would, if available, have but little effect.