Aberdeen City’s ‘Tree for Every Citizen’ scheme, the proposed deer cull, and the case for meadowland preservation are examined in an extensive report issued by campaigner Suzanne Kelly. 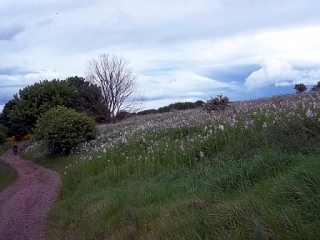 This report examines a controversial plan by Aberdeen City Council to attempt a second plantation of 89,000 trees on Tullos Hill.

The first attempt largely failed due to poor soil, weeds, and other factors, including arson, weather, and deer browsing – according to a Forestry soil report.  This first attempt cost the City £43,800.

The issues of how the City launched its public consultation (which omitted a 2-3 year weed control requirement and a deer cull) and how it has since responded to its Community Councils and citizens forms a large portion of this report.  The report also focuses on the benefits of keeping  the hill as it is – a grassland/meadowland, enjoyed by both people and a wide variety of wildlife.

The report and related documents can be found at  http://suzannekelly.yolasite.com/

The City has previously stated that this scheme is ‘cost neutral’ – but as emerged last month, there is actually no funding in place, as only a draft application has to date been submitted.  Proponent of the initial scheme, Cllr Aileen Malone, has left recent emails on the subject of the financing unanswered.

Meadows throughout the UK are being lost to development at an alarming rate.  In the same area as Tullos Hill, a football stadium is set to be built in an Special Area of Conservation (SAC), with 2 species of EU protected animals known to be present.  Also nearby, a housing development also spells loss of green space.  With wildlife losing breeding and feeding grounds in this area of the city, campaigners including Kelly and Councillor Neil Cooney are calling for a re-think to the tree scheme.

A Soil Report from the Government indicates that a planting on Tullos Hill will not be successful.

Petitions collected thousands of signatures against the cull, and four Community Councils objected to the scheme and the cull. A Facebook community on this issue has some 3,000 members.  A new petition to preserve or enhance Tullos Hill has over 400 signatories, and can be found at http://www.gopetition.com/petitions/tullos-hill-meadowlands-deer-park.html

Animal organisations, including the Scottish SPCA, condemn the proposed deer cull, which was announced in March.  Documents demonstrate that the cull was planned specifically for the tree planting, although the City’s officials are now saying it needs to cull part of the small herd (some 29) in general – the figure of 9 deer and a cull lasting a few years have been suggested.  The deer roam across several sites.

Animal charities point out that many methods of planting trees with non-lethal measures exist, and that other deer would likely move into the area after a cull.  Many experts question the wisdom of putting so many trees on a windswept hill on the North Sea where a previous attempt failed.

“Many feel the deer cull should have been mentioned in the public consultation.  The consultation mentioned rabbit fencing, so people assumed that if other animal issues existed, they would also have been brought to the public’s attention.  Because the cull and the weed control (which may mean years of spraying toxins) were not included, no one raised timely objections.”

“The handling of this affair from start to finish goes against what the people in the area want.  It goes against principles of transparent, open government,  and it goes against logic.  There is a report that says it is unlikely the trees will grow – why are we throwing good money after bad?  Tullos Hill is a beautiful meadow with abundant wildlife, and its wildflowers attract visitors.  When we are losing this type of habitat to development nearby, why should we try to turn one ecosystem into another?”