Aberdeen Voice presents the fourth of a six-part tragedy by Jonathan Russell describing the shocking process of service closure for disabled people in Aberdeen – and asks what we can do to reverse the destruction. 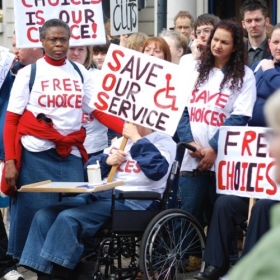 At the end of 2009 the axe fell on the Community Placement Team in two ways.

Firstly, a report had gone to Council, which agreed to the cutting of five staff from our team. (If you remember from the first article – the Social Work Inspection Report – the team actually had much better outcomes than the norm in Scotland in relation to employment). Yet the report said they would re-provision services for better outcomes.

Our concerns were not only about the actual cuts, but also about how management implemented the cuts. There were no attempts to help us through this process and (as touched upon in the Social Work Inspection report) the perceived culture was ‘macho’, ‘punitive’, ‘autocratic’ and ‘hectoring’. This culture created low morale and a feeling of hopelessness.

What followed was a series of meetings with the voluntary sector with the aim of setting up this ‘high outcome service’. However nothing came out of this process except wasted time and money, with the net result of no new services being developed or delivered as agreed by Council.

Once more public money was being wasted, and no new services – as were promised to the Council and by officials – were actually created. So rather than better outcomes, no outcomes were achieved at all. Time and money was wasted and this further demoralized staff on the front line. We also lost good committed staff through this process.

What should be of concern to the public is that the Council failed to hold the officials to account for their failures, which evidences an administration which can often be out of touch with what actually goes on at service level.

Secondly, the decision was made to move the Community Placement Team away from the Choices building. The Choices building had been especially built for disabled people and was a venue that people with disabilities saw as their own.

The other service that had been based in the Choices building was the Choices Respite Service; and clients became involved in a high profile campaign to re-instate the centre.

Management was not happy with being questioned in this way and wanted the whole disability service based in the building closed down.

Along with partners in the voluntary sector, we had put a proposal together which would have more than covered the costs of keeping Choices open. Higher management refused to discuss this, and the proposal was turned down.

As has often been the case, no logical thinking by officials within Aberdeen City Council was in evidence. The administration appeared out of contact and led by the officials.

The team was moved into an anonymous open plan office in the centre of town. This had major ramifications for the services we had developed with Access to Training and Employment, because we lost our especially adapted garden, which included especially designed and created raised beds and poly-tunnels.

The cost of the parking permits itself would have covered the cost of keeping Choices open.

Much of the work done in creating this horticultural complex was on a voluntary basis.  Over £100,000 worth of resources from oil firms and trusts was gathered at no cost to Social Work Services within Aberdeen City Council in the building of this gardening complex.

We had also planned to base Crafty Things at Choices, following the loss of premises due to the re-development of Beechwood School. This resource was providing services at very little cost to the council. But rather than saving money, the council was intent in purchasing more expensive services by spot purchasing service from the voluntary and private sectors.

As stated previously the Community Placement Team was moved into Kirkgate House – a large anonymous open plan office, which had restricted access for clients. Precious time and money was wasted, with staff having to go back and forward to car parks.  The cost of the parking permits itself would have covered the cost of keeping Choices open.

To deal with concerns raised in the Social Work inspectorate report a new Transitions team was set up.

This entailed taking on an extra Senior Social Worker. As well as the Senior, the team consisted of four social workers – only two of whom actually carried out work with transitions. The other two staff were involved in carrying out service reviews. In reality half the transitions work was still being carried out by the Community Placement Team.

To try and compensate for this we set up joint meetings between transitions staff in both teams. There was no interest in this from management; probably because they knew what was going to happen next.