Charlie Mingin, the Auchnaclatt Bugle’s ‘Weel-Chilled Chiel’ columnist, guests for Voice this week, giving the bebop lowdown for hep cats and byre tabbies, doffing his hiply-angled Panama in the direction of The Fast Show’s Louis Balfour. Fingerprints on Cattle Cake’s ‘bone believed to be those of George Anderson…. 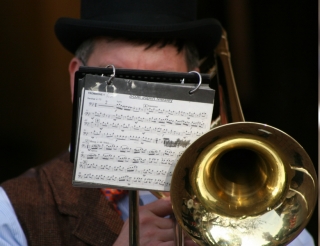 Within twenty minutes of going on sale, both tickets for Coos in the Park had been snapped up amid fears that a surge in demand might crash Ticketmaster’s system.

I was one of the lucky ones. The minute the ticket tumbled through my letterbox, a vibe in these old jazzman bones of mine told me that something crazy was about to go down in Daviot.

And was I right, Daddy-O?

The concert in The Byre, the north east’s premier teuchter-jazz club demonstrated that Jock Kerouac and The Beet Generation were right back on top where they belonged. On the night, their fusion of bothy ballads and sixties jazz really razzed my berries.

Yes, there were mistakes. Somewhere approaching the middle eight of the opening number, Lousin Time, and half way through his third reefer of the night, Jock realised that the double bass he thought he’d been playing for the last half hour was actually still in the tipper truck that ca’d neeps during the day and transported the band to gigs in the evening. Undaunted, he rattled off the piece’s twenty minute double bass solo on his galuses. Beat that for improvisation.

I’ve been a fan of The Beet Generation since I first saw them perform at Gamrie’s Clockin Hen nightclub in 1987. Granted, nobody asked them to play but they managed to knock off their own rewrite of a Billy Joel classic, In the Midden of the Night before the bouncers got Jock in a headlock, huckled him head first out through the fire exit and into the car park where they pinned him down until the police arrived.

The band’s line up hasn’t changed since the Gamrie gig:

The first set was an intoxicating blend of old and new material, kicking off with three of my favourites: Lousin Time; Let’s Get Yokit! and Fa Cut Yer Hair an Cried Ye Baldy?

The lads ended the set with the title track from their latest album, We’re Aa Up the Wrang Dreel Noo.

Haste ye back, Jock, we can hardly wait for your next concert.

At the risk of rekindling the trad-bebop wars of the early sixties, Sid Rawlins, music critic of the Crovie Chronicle has given Voice an alternative view. 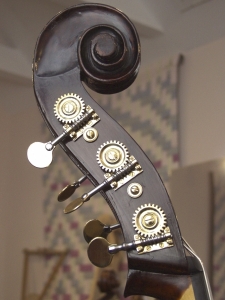 Hepcat Harrison and the Kittlins were treated for shock at Turriff hospital last night following the murder of their teuchter-jazz classic, Let’s Get Yoakit! at the hands of jazz fraudsters Jock Kerouac and the woefully unmusical Beet Generation who somehow managed to make this classic track sound like a badly-tuned piano falling down a spiral staircase.

The scene of the crime: The Byre Club, Daviot.
Time of death, 7:30 pm Formartine time (GMT minus seventy years).

Bad jazz stands out like a toonser wearing nicky tams. And make no bones about it, this was jazz at its worst. The evening was not helped by the fact that Cattle-Cake Collins stopped mid-honk during Lousin Time to spray WD40 on his trombone slide.

I sort of liked the Beet Generation’s new project, We’re Aa Up the Wrang Dreel Noo. Yet overall, a lacklustre performance by over-rated musicians.

As Ray Charles would have said had he hailed from Kemnay, ‘Hit the road Jock, and dinna come back ony mair.’