January and February always seem to represent a low time in the year. Christmas and New Year have been and gone and there seems little to look forward to. The days remain short and the nights long. It’s usually raw cold. Unwelcoming. The opening months of the year always cause something of a gloom to hang over Mick Miller’s household. Bung in a global recession for good measure and things seem pretty bleak. Then it got worse. What’s up, Mick? 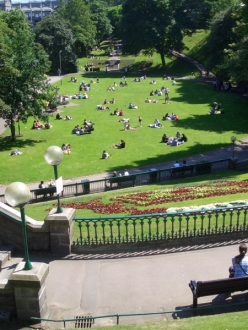 The post arrived on Monday and out of the two-for-one pizza offer junk mail fell a gaudy catalogue.
Only it wasn’t a catalogue – it had “VOTE” written on it. Promotional blurb for the City Gardens Development.

How profoundly depressing. The front ‘cover’ illustration is of some futuristic landscape from another place.
Only on closer inspection it isn’t. It’s Aberdeen, or, more accurately, a version of Aberdeen which can only have be conceived in cloud cuckoo land.

Real people, in a REAL garden.

It’s lurid, horribly-coloured, glib and vacuous. It is pervaded by a complete sense of the unreal. Semi-transparent people wander aimlessly inside a cartoon-flowered version of reality. Children trample unrestrained, yet the flowers survive.

Out-of-scale human forms laze in some sort of airborne meadow whilst below them, in a throwback connection to the real world, trade waste bins lurk ominously. A woman of Amazonian proportions accesses a laptop whilst sitting on surprisingly unbending grass stems. The remnant spire of the Triple Kirks emerges from a scrubland of low growth stock image shrubbery.

It all looks vaguely ill-tended, neglected, as if within this futuristic vision lie the discards of the past. Or perhaps its a tacit admission that should, god forbid, this monstrosity go ahead, there is just no way that the upkeep will be affordable. Delving deeper, the background is found to comprise of a realigned His Majesty’s Theatre and a hugely-inflated and decapitated William Wallace. A victim of the guillotine perhaps?

But the history, like the whole of this charade, is just plain wrong. Landscape dressed up as farce. A cityscape for Anywhereville. Inaccurate. Disjointed. A cut-and-paste pastiche.

Opening up, things don’t improve. A drab labyrinth of pathways which look like bridges over a motorway, criss-cross manicured lawns and monoculture grasslands. In one image the sun sets….or does it rise? Either way, it’s in the wrong place. What on earth, if we are still on earth, is going on? This is lazy work, a Standard Grade project gone catastrophically wrong. Everything is confusing.

The front page image shows a gaudy flower bed appearing to lie on a lower level of the structure. Moving inside the pamphlet the same floral, er…..’bombshell’, is miraculously elevated. Or is it that those bloody bins are just absolutely HUGE? I’m confused, disturbed even.

I’m going to have a lie down, maybe I’ll feel better and ‘it’ will all have been a bad dream. Only it won’t. It isn’t.

In the sunset image, an oddly-inclined piece of lawn totters precariously into the largely obliterated Denburn valley. In Woody Allen’s Manhatten, a character in a TV show is observed to have a toupee so badly-placed on his scalp that it looks like it has been dropped on to his head from a great height in an uncontrolled way.

This elevated savanna has the same feeling about it. There will be a need for avalanche warnings in the snowy depths of winter.

In another image, a pipe band plays beneath a Formica-lined dome with random cut-outs that give the feeling that the design is based on half a panelled football booted around Pittodrie of a Saturday afternoon. Below this, a winter scene shows people so cold they have started to vapourise as, it would appear, has the Formica football, associated terraces and denuded trees, miraculously large for such a recent planting.

A lone child in a blue jacket has something so contagious that the populace in the foreground seek to distance themselves as quickly as possible. Is he the cause of the vapourisations? Oh I get it – we’re on the set of War of the Worlds and soon tattered clothing will rain down upon us from the sky. I know that was the only good bit. It all has an apocalyptic feel. I’m going to have a lie down, maybe I’ll feel better and ‘it’ will all have been a bad dream. Only it won’t. It isn’t.

Aberdeen is a beautiful city, notwithstanding some recent disastrous architectural additions. It doesn’t need or deserve such ill-thought out attentions as this abomination.

Union Terrace Gardens are an integral part of what allows Aberdeen to maintain its architectural, cultural and civic dignity. The Gardens need some tender loving care, but they don’t need annihalation by the ‘solution’ that this tacky pamphlet proposes.

A heartfelt plea. Please, people, don’t let this thing go ahead. Make sure you vote to retain Union Terrace Gardens.

Union Terrace Gardens are a vital part of Aberdeen’s heritage. 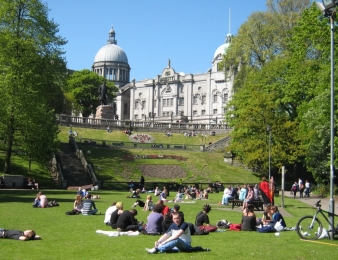 The city centre park was planned by Alexander Marshall Mackenzie, the architect who also designed the Art Gallery, St Marks and the frontage of Marischal College.

If Union Terrace Gardens feel as if they belong in the city, it is because there is a harmony between the park and the surrounding buildings, several of which were designed by Marshall Mackenzie.

There is a sense of architectural authenticity. This authenticity would be lost if a six-acre modern square is built, which would be surrounded by Victorian granite buildings. The singer Annie Lennox has described this possibility as an act of civic vandalism.

The beautiful granite buildings give us a sense of place and belonging. We identify with our heritage, and Aberdonians are proud of their beautiful city. The replacement of the old with the new, artlessly done, erodes the unique feel of Aberdeen, and starts to make our city look like everywhere else.

The Gardens are beautiful and spectacular.

The Gardens provide shelter below street level under the hustle and bustle of the city centre. The shelter is enhanced by the 78 mature trees in the Gardens, all of which will be chopped down if a modern city square is to be built according to the technical feasibility study.

Union Terrace Gardens has many qualities to be exploited and enhanced including:

– Topography which provides a unique and dramatic setting for the surrounding historic townscape and bridges, and an essential component of the identity of the City Centre

– The character of buildings to the rear of Belmont Street

– The setting for His Majesty’s Theatre, St Mark’s and the Central Library, Denburn Viaduct and Union Bridge

The development of Union Terrace Gardens is not a done deal.

There are many obstacles in the way of the so-called City Garden Project, such that it is unlikely to happen.  The project depends on the Council borrowing £70M to fund the project through Tax Incremental Financing. The council, who are £562M in debt, cannot afford to take any more risks on borrowing.

There is no public consensus for the project: indeed a consultation held two years ago rejected the scheme. The politicians are hoping to address these concerns by holding a referendum, which will inevitably support the retention of the existing Gardens.

There is a much better alternative to building a modern and intrusive city square in the middle of the Granite City.

It wouldn’t take much.

Our park needs some tender loving care, new toilets, a play pen, improved access. We have organised social events in the Gardens and we are instrumental in making Union Terrace Gardens a fun place to visit. It is a park that is a key part of Aberdeen’s heritage, the green heart of the Granite City.

We are a community group dedicated to the future of Union Terrace Gardens.

– Join us, help us in our aims; find out more from our website www.friendsofutg.co.uk