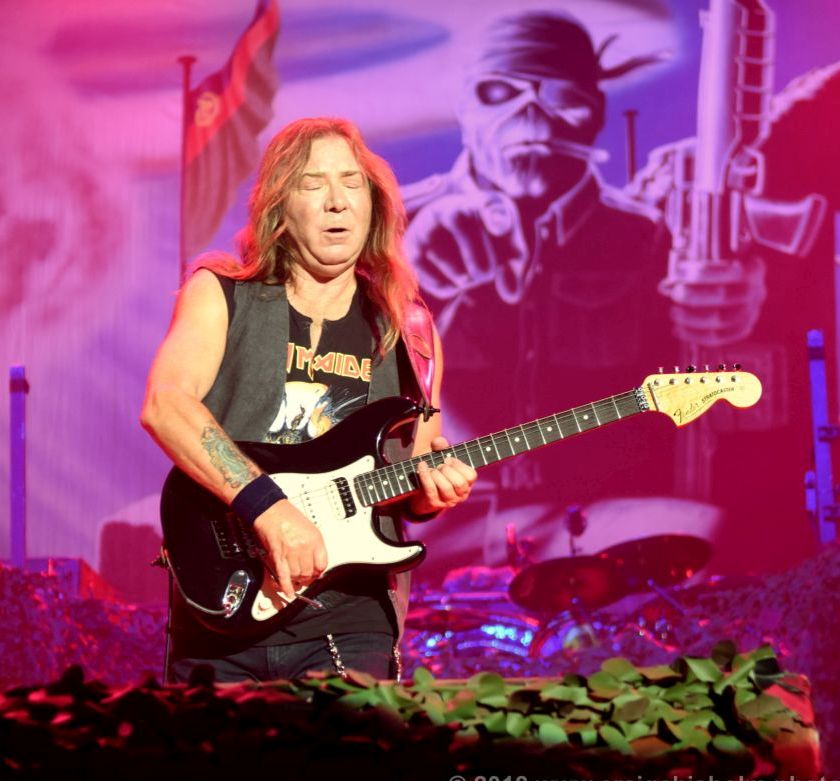 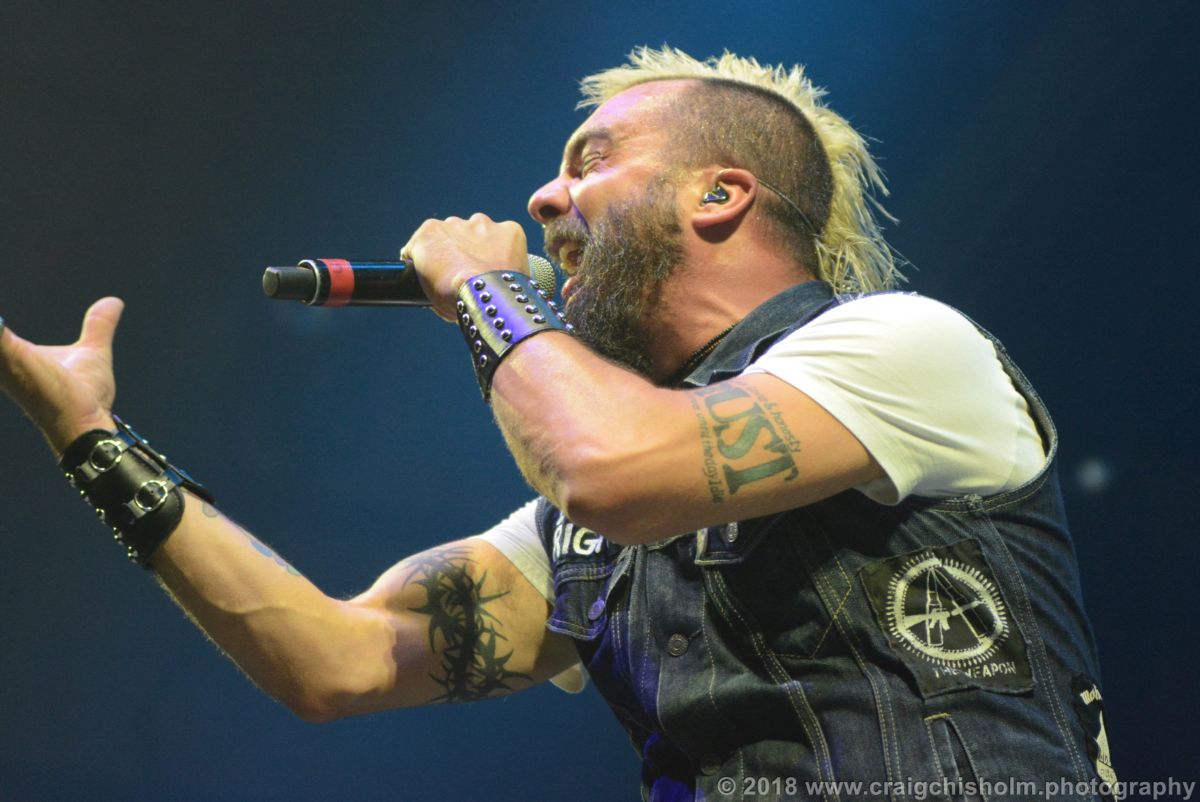 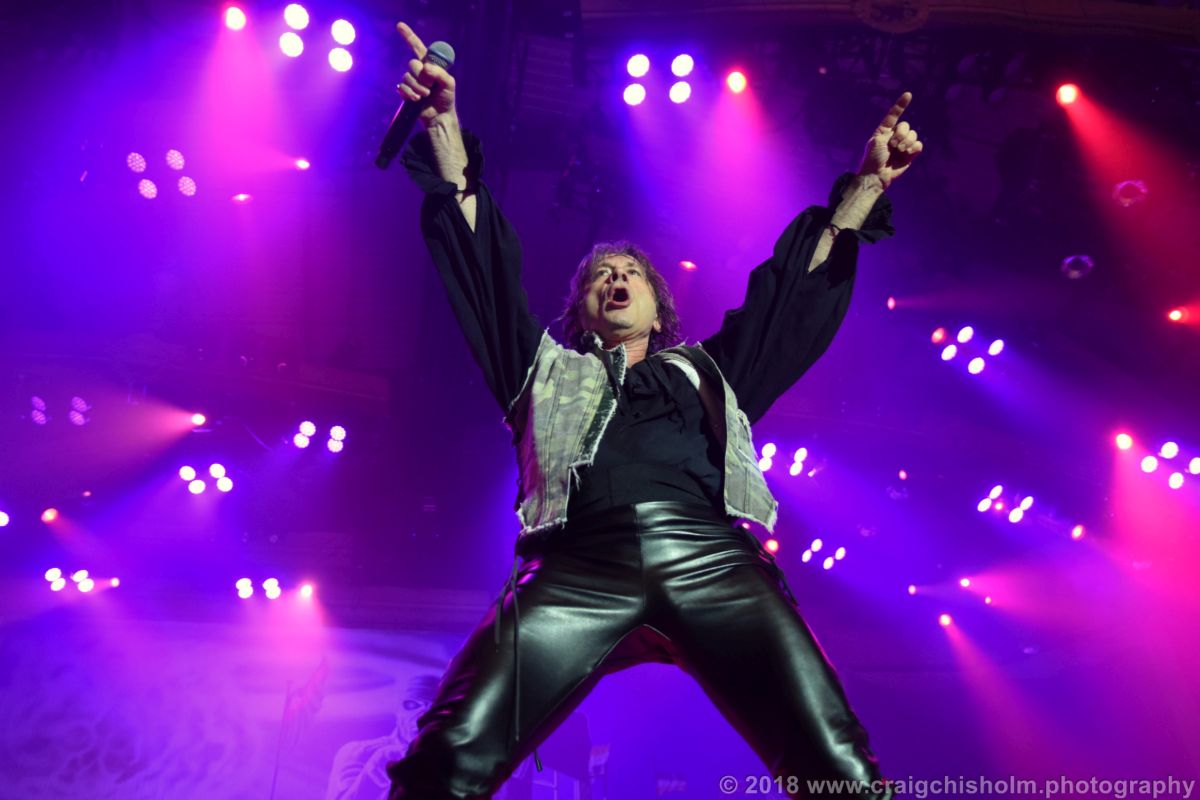 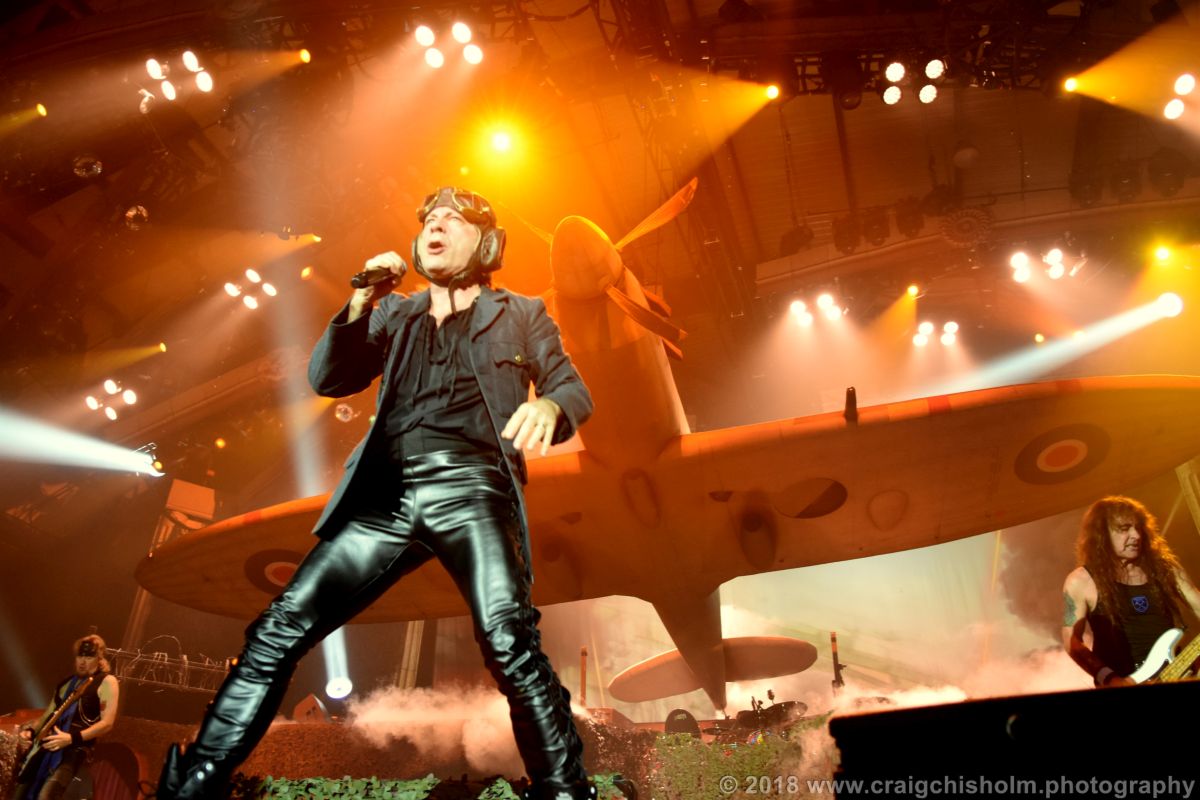 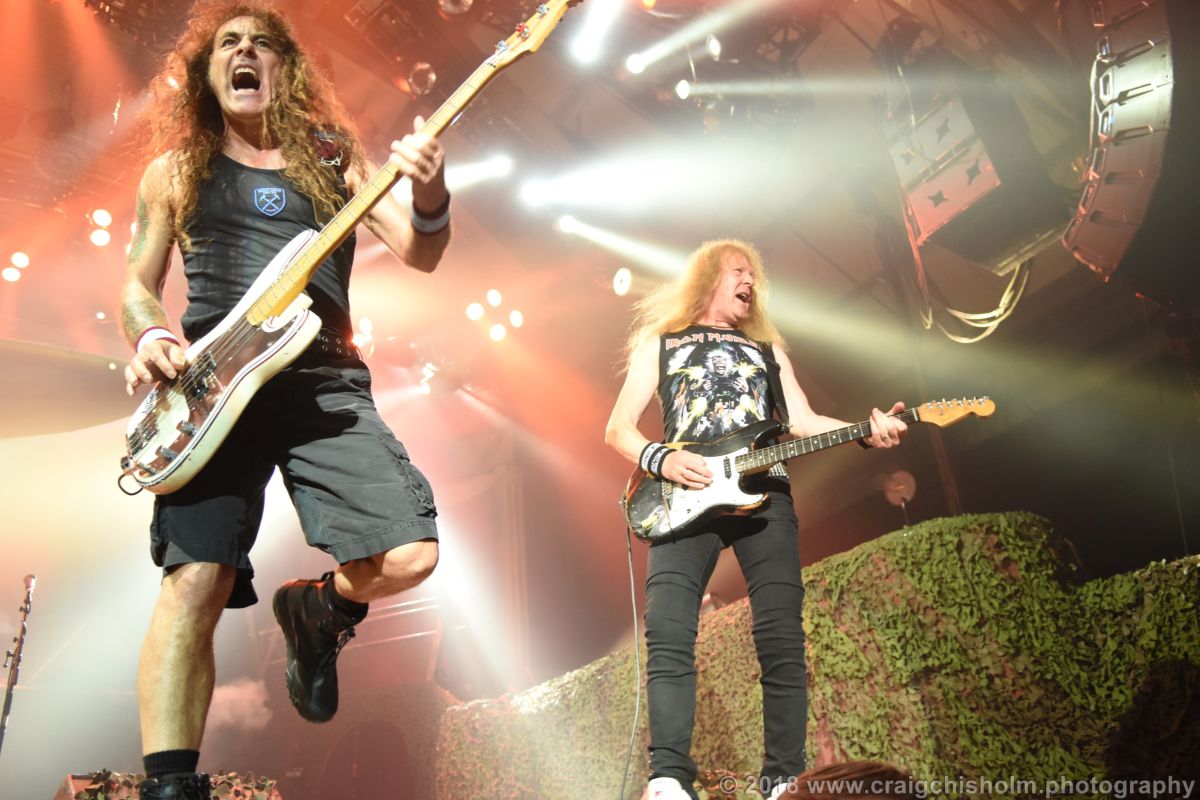 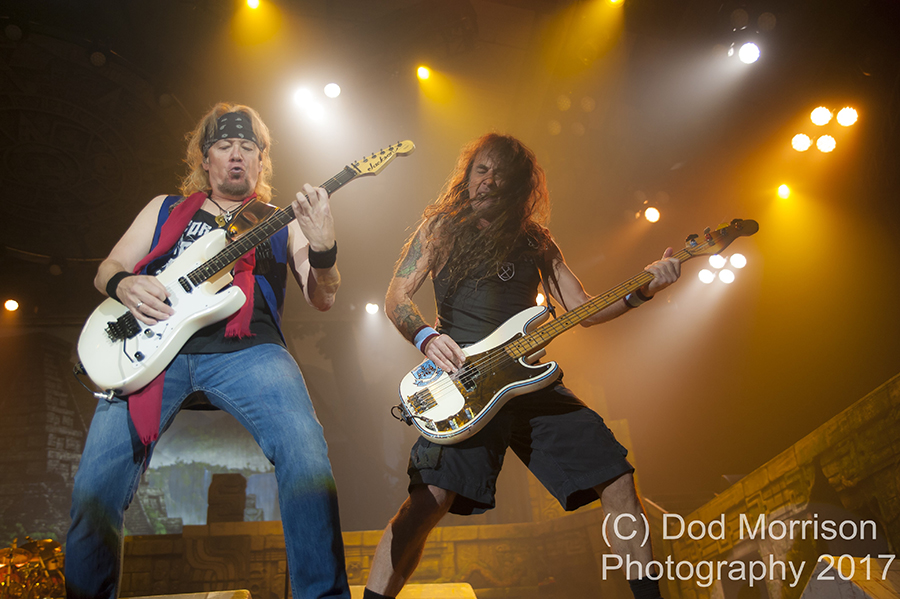 Review and Photographs by Dod Morrison.

Iron Maiden were formed in 1975 by bassist and songwriter Steve Harris.

The band were returning to Aberdeen after a five year gap as part of their ‘The Book Of Souls’ tour.

Released in 2015, this was the band’s sixteenth studio album as well as their first double studio album and at 92 minutes, their longest to date. It also contained the band’s longest track, ‘Empire of the Clouds’ at a staggering 18 minutes. 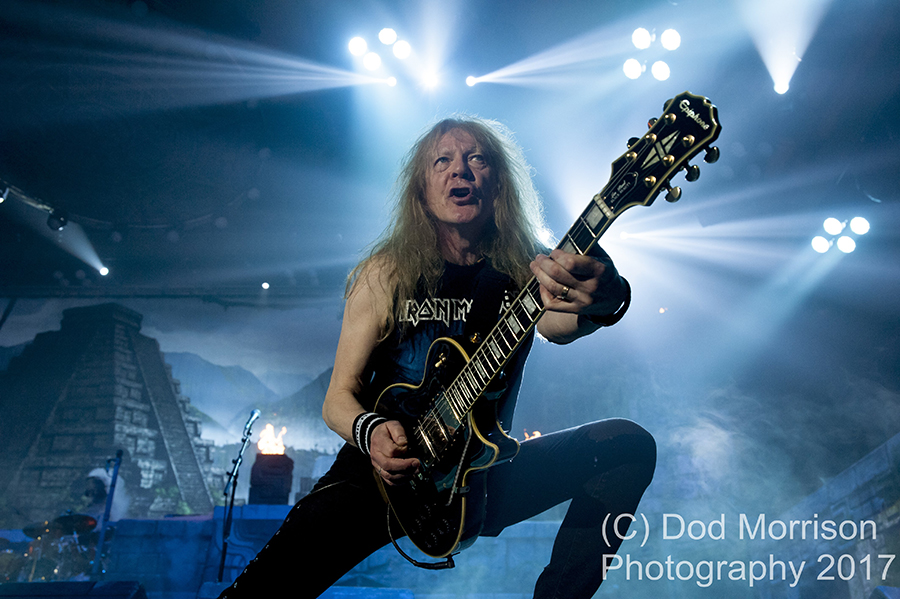 The album was actually recorded in 2014 but the launch was delayed to allow Bruce to recover from the removal of a cancerous tumour on his tongue.

The album was a commercial success reaching number 1 in 24 countries. They started the tour in February 2016 and it will go through until July 2017.

When Iron Maiden come to town it’s not just to play a gig, it’s an EVENT!

They are known for  their extravagant stage shows which usually feature a huge Eddie The Head (the band mascot). Eddie is a perennial part of Maiden, appearing on all the covers of their albums, and he appears in the live shows in various guises. 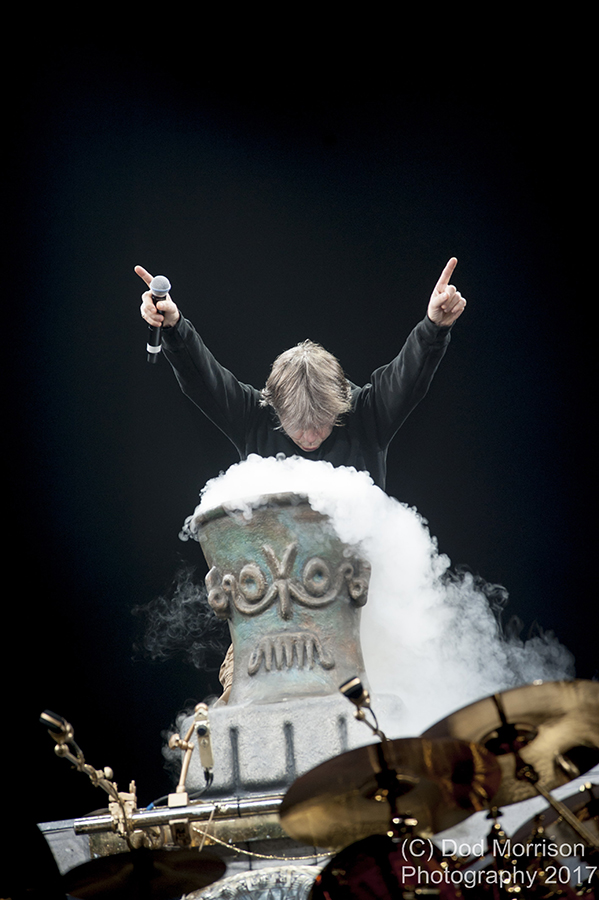 Unfortunately, a pending dispute about ‘Hallowed Be Thy Name’ song credits means that the fan’s favourite song (and my own favourite) had been removed from the current The Book Of Souls tour set list.

The Book Of Souls tour came to Aberdeen where the faithful filled the AECC and prepared to worship. The stage was made to look like an Inca style lost city. A half rectangle shaped wall surrounded and contained the stage with several braziers along its length and moving backdrops, flanked by pyramids on either side.

After a rousing version of ‘Doctor, Doctor’ by UFO was played to get the crowd going, the set commenced with Bruce Dickinson standing on the wall above and behind the drum kit.

Bruce inhaled the vapours from a cauldron on a pedestal as the first chapter of Book of Souls plays.

He then launched into a magnificent, energetic rendition of ‘If Eternity Should Fail’.

Flames erupted from the braziers along the city walls as Bruce dashed across them from side to side. Beneath him Nicko McBrain was drumming up a storm on his impressive and very shiny drum kit. 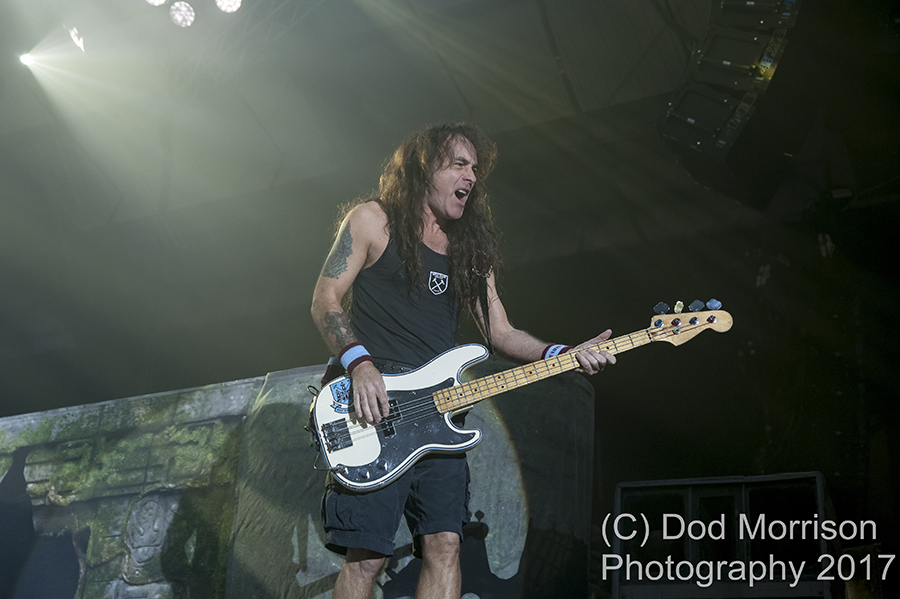 In front of him guitarists Janick Gers, Dave Murray and Adrian Smith covered the stage, adopting the usual foot on monitor poses.

Janick used the furthest forward set of speakers as a seat, and also enjoyed giving it the odd kick just to show it who’s boss.

Of course, amid all of this, the iconic figure of Steve Harris strode across the stage brandishing his bass.

As the set progressed the huge backdrops behind the band changed to reflect each new song. 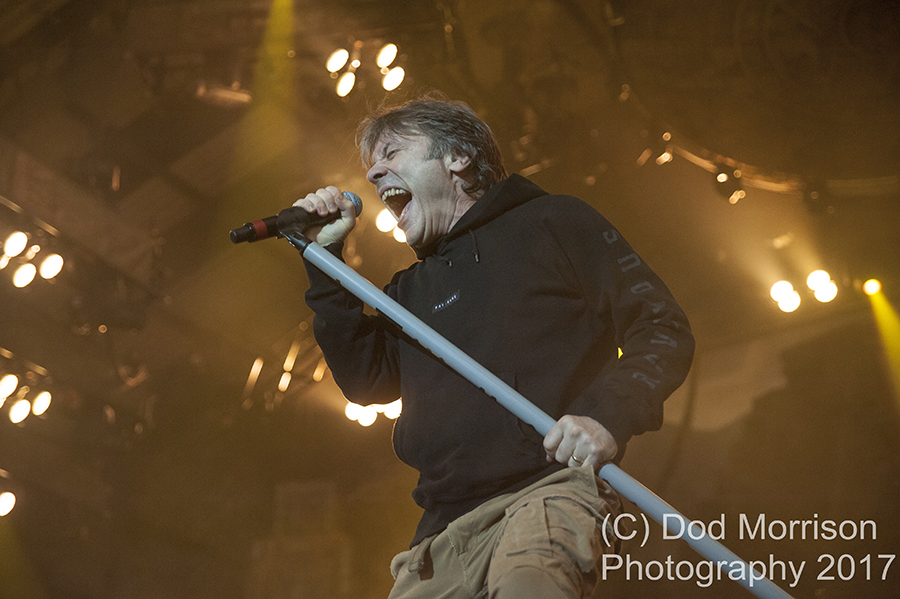 At one point he sported a gorilla mask and brandished bananas at the other band members! For ‘Power Slave’ he wore a leather mask, which must have been incredibly sweaty on the warm May night, but it didn’t slow him down at all.

He charged across the city walls above and behind the rest of the band.

As all of this unfolded before our eyes, our ears were treated to a very well chosen set list which covered the entire career of this magnificent band. They played oldies such as ‘Wrathchild’ and ‘Iron Maiden’. 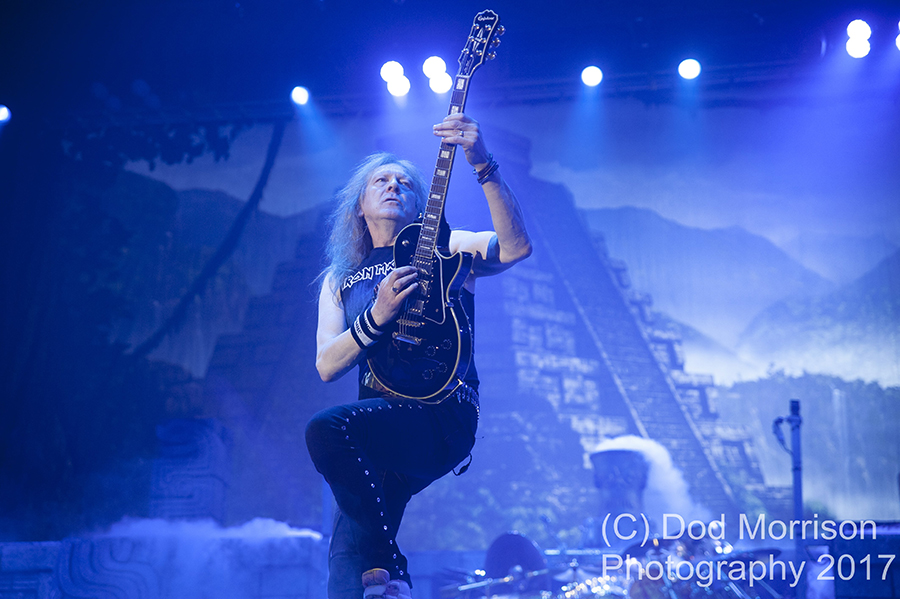 During a magnificent version of ‘The Trooper’ Dickinson was clad in a red ‘Trooper’ jacket and he charged along the walls brandishing a huge Union flag.

At one point he amusingly draped it over Janick Gers as he played his guitar below. It was hard to discern how much ‘playing’ Janick actually did as he spent a lot of time throwing his guitar around on its strap, dancing with it.

We were treated to ‘Fear Of The Dark’ and then on to current masterpieces from the ‘Book of Souls’ album, including a blistering rendition of ‘Speed Of Light’ during which the crowd sang impressively along with the chorus. 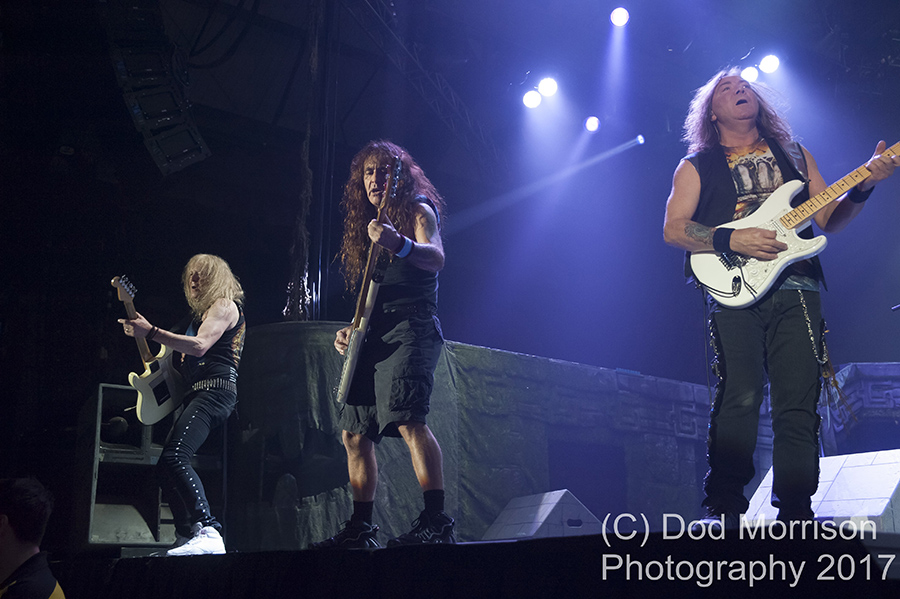 It was a well chosen, well thought out set list.

You didn’t want to look away even for a second in case you missed something spectacular, such as the huge sporadic flames that erupted from the braziers along the city walls, or the massive inflatable Eddie figure that floated up from behind the set.

During ‘Book Of Souls’  a giant Eddie figure appeared on stage and ‘attacked’ the band.

Janick ran through its legs, then when Eddie tried to chop him with his axe he responded by hitting Eddie between the legs with his guitar. 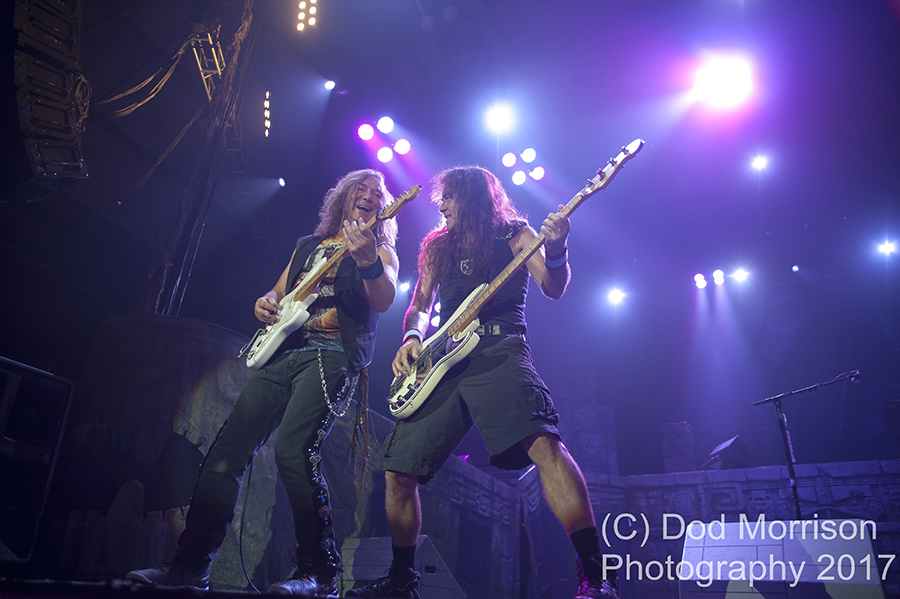 Eddie then moved on to attack Dickinson who fought back and pulled out Eddie’s heart. Bruce squeezed the blood from it before throwing it into the crowd – most entertaining!!

At the end of the song Bruce said “this isn’t something you see every night, the stage on fire” – and it was! There was a flame about 2 feet high burning up on the top of the set! The band carried on regardless whilst the fire was put out.

The main set finished with ‘Iron Maiden’ before an encore of ‘Number Of The Beast’ (which involved the appearance of a huge inflatable Satan figure), ‘Wasted Years’ and ‘Blood Brothers’.