Suzanne Kelly updates her piece Trump Menie:  Wildlife Shot, Carcasses Dumped in Hole with quotes from experts, and shows how this destruction of wildlife fits the pattern of business at the club. 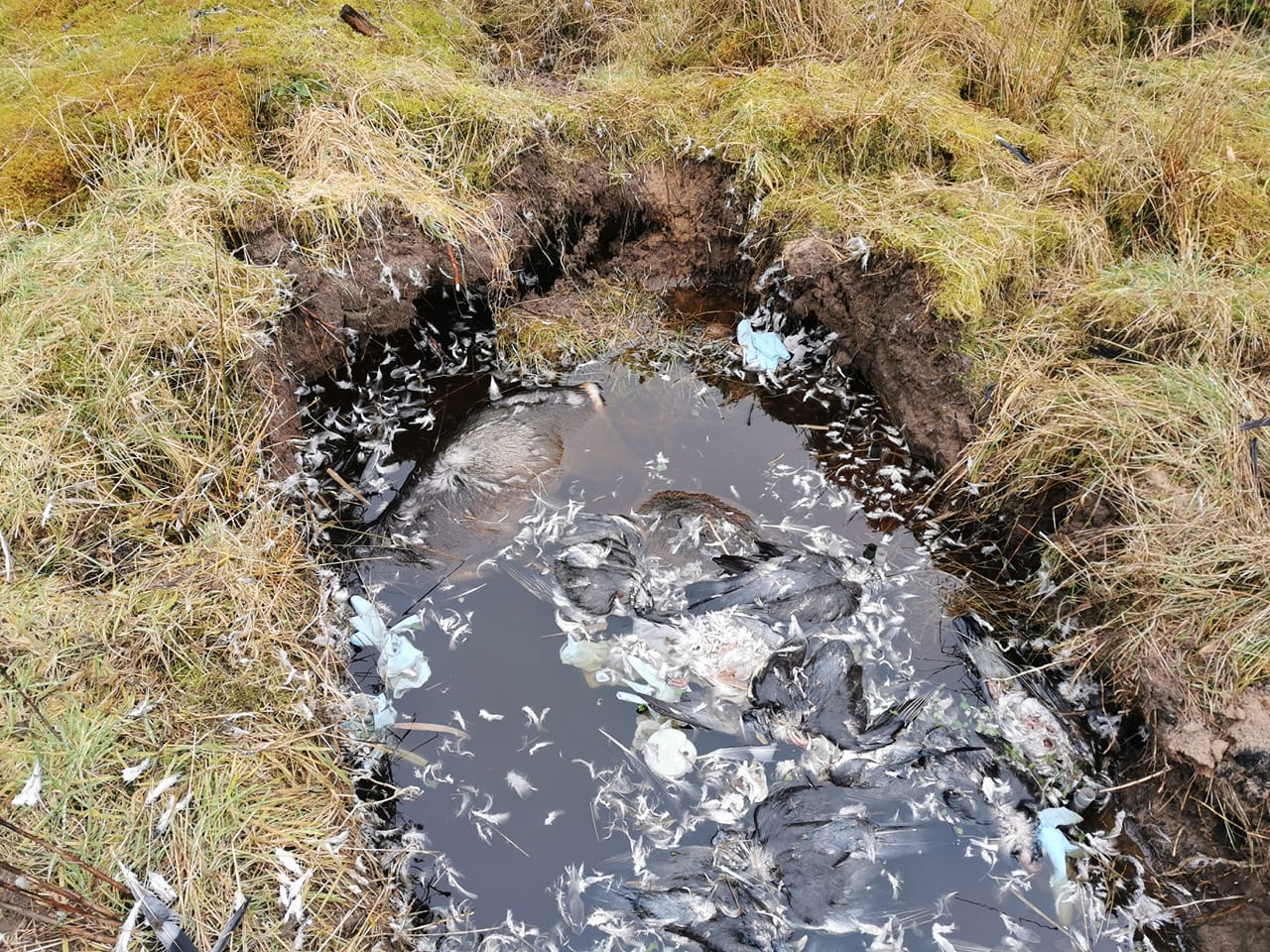 Trump International Golf Links Scotland at Menie is killing wildlife, and may be ignoring good practice with its horrific open stink pits filled with decaying deer and birds.

NatureScot told Aberdeen Voice it has concerns at Trump’s decision to kill wildlife and leave it rotting in open holes, saying:

“the disposal of carcasses in a water-logged, open burial pit is not in line with good practice.”

In early February 2021 a concerned member of the public who discovered a stink pit on the Trump Menie Estate alerted Aberdeen Voice.  They sent us photographs of the ‘worrying’ pit filled with deer and birds decaying in oily, stagnant water.

For a resort given a ‘Six Star Diamond award’ for its excellence (Donald J Trump was on the award body’s executive board coincidentally), and given Trump’s infamous ‘sh*thole countries’ remark when he was president, this disgusting, wildlife destruction is beyond the pale.

The practice of having stink pits is, shockingly, not illegal.

The pit is used to destroy wildlife.  Animals are killed, then the rotting carcasses are left exposed to attract animals that feed on carrion.  Those animals are then destroyed too.

There are reports of area pet cats that went missing and never returned.  We await comments from Trump on this point.

“We have been made aware of the matter and no criminality has been established.”

The spokesperson from NatureScot also said:

“We cannot tell from the photographs provided whether an offence has been committed. However, the disposal of carcasses in a water-logged, open burial pit is not in line with good practice… we would urge anyone who suspects that a wildlife offence has taken place to report their concerns to the police.”

“From the photographs I have seen it is obvious that deer and several species of bird have been deliberately dumped in this pit. I have dealt with cases before where animals have been killed for scraping at the grass on golf courses in order to find worms to eat.

“There is absolutely no good reason to kill animals on a golf course.

“Indeed I’m sure most golfers would appreciate catching a glimpse of a deer or seeing some birds while they are out on the course.

“I hope the Trump organisation give a full explanation for the presence of this mass grave on their land and then make a commitment not to allow any further persecution of wildlife on all their landholdings in Scotland.”

A spokeswoman for the RSPB found nothing amiss; they said:

“.. what is shown in the photographs does not appear to be illegal, despite how unpleasant it is, so we cannot comment on this.”

Should any reader get a response from the Trump organisation, we would like to hear it.

The environmental monitoring was a sham.  When the Scottish Reporters weighed up evidence on Trump’s proposed course, Aberdeen-based Professor Bill Ritchie said the course would not impact the environment if there was monitoring.

As readers of Aberdeen Voice may know, he led the environment monitoring group called MEMAG.  MEMAG fell apart on Ritchie’s watch and no agency did anything to save it.  Ritchie has never responded to any of Aberdeen Voice’s requests for comment.

Two SSSIs are gone forever.  Further examples of the Trump organisation acting as if laws didn’t apply to it are many.

Menie’s two Sites of Specific Scientific Interest (SSSIs) had the highest level of legal protection an environment can get.  The sites, the only moving sand dune system in the UK, were destroyed, and virtually nothing was done to stop it.

Trump has ignored/overstepped planning permission several times, and has at least ten retrospective planning approvals.  From our observations, this is not the same consideration Aberdeenshire shows to others who fall foul of planning. 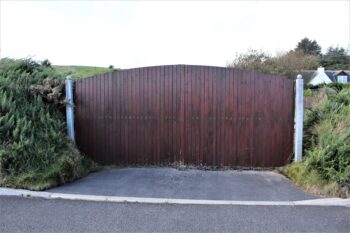 The Land Reform (Scotland) Act 2003 gives everyone rights of access over land and inland water across Scotland.
Over the years, Aberdeen Voice reported numerous ways this was ignored at Menie to Aberdeenshire Council’s relevant officers.  Nothing we reported was ever remedied.

Gates are permanently locked shut, such as the one between Trump’s parking lot and Leyton Farm Road.

Plants have been put in place which block peoples’ access around this gate and elsewhere.  Anyone with a bicycle, pram or disability is not getting through or around that gate.

Waste management has been irresponsible. 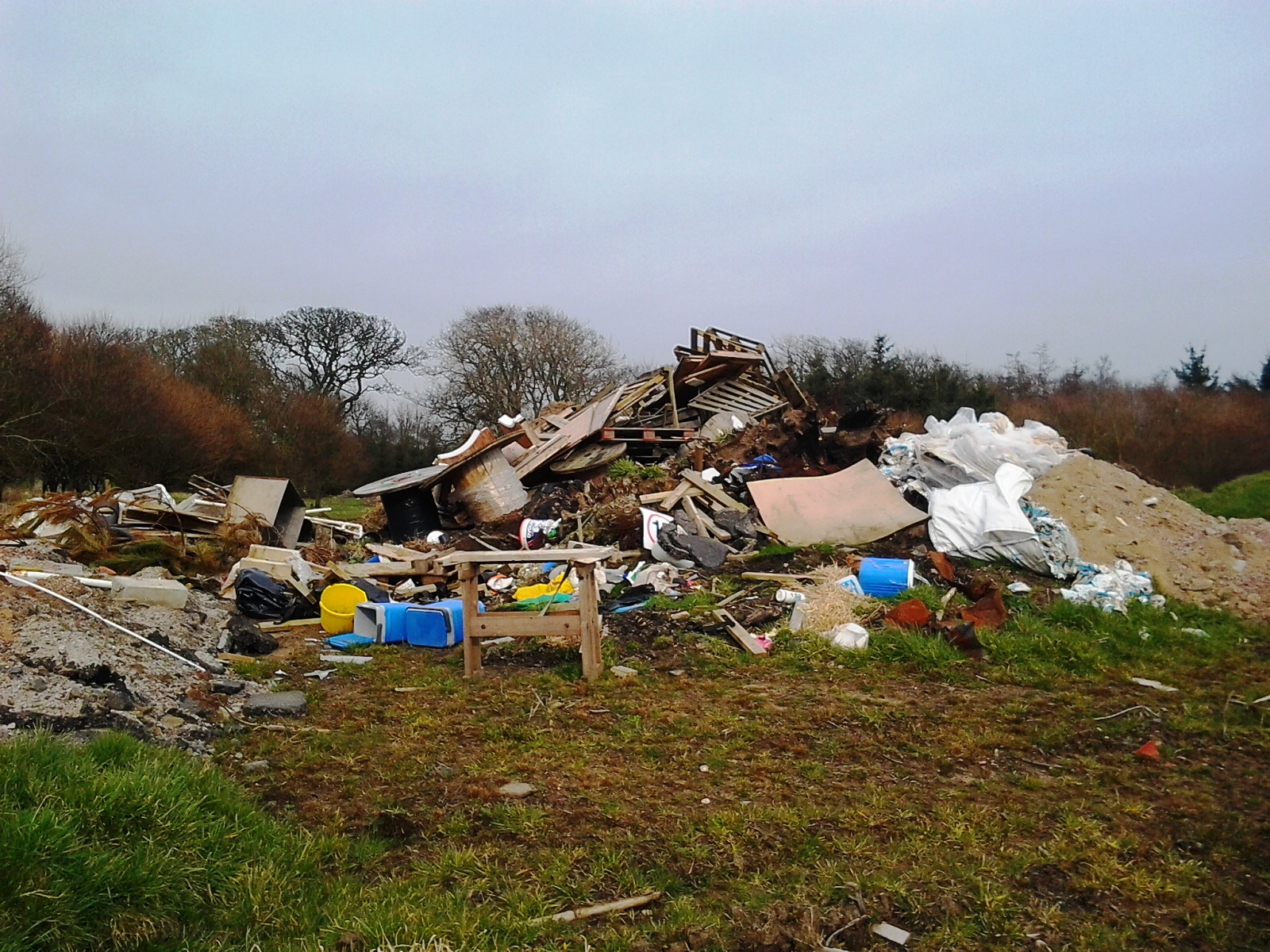 Mountains of mixed waste existed on the estate.  I took these photos following information from an environmental campaigner in March 2013 .

Chemical containers, plastics blowing across the land and the scale of the waste was staggering.

Animals are being destroyed; chemicals are used on the greens (per previous AV articles), the SSSIs are destroyed.  None of the promised benefits (thousands of permanent jobs, tourism money) appeared.

How long can it be before the area is entirely destroyed and housing springs up?

Footnote:
I dedicate this piece to my sources to whom I am grateful.  In particular there are three wonderful dear friends who bravely fought to help the situation at Menie and made a difference, but who can no longer fight.