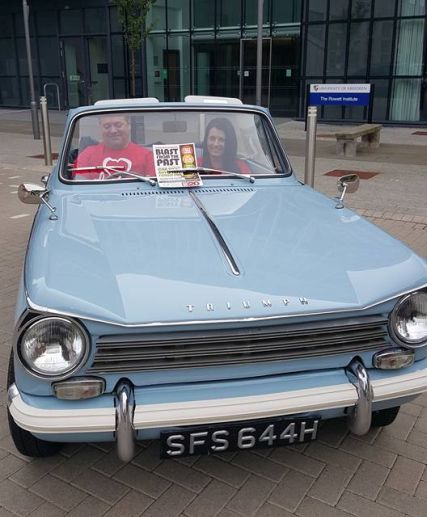 The British Heart Foundation Scotland will be a major beneficiary from funds raised at ‘Blast from the Past’ – a Classic Car Show featuring rare and unique vehicles from across the North-east – on Saturday 22 July 2017.

“We are delighted that Margaret and Ian McWilliam along with their daughters Jade and Iona have accepted our invitation to join us at the event” says co-organiser Alan Leonard.

“The McWilliams, a local family from Kintore, give up a lot of their time in support of the BHF as their lives have been directly impacted by the effects of heart disease.”

Co-organiser Alan Leonard and main sponsor Alan Wallace of Aberdeen’s AW Autotech chose the Inverurie venue for this inaugural event due to the suitability of the site.

“The area we are using is all in tarmac” says Alan “and we also have the exclusive use of the entire in-door shopping mall and display area.”

“More importantly” he says “From our first contact with Thainstone management they have offered us all of the professional support we could possibly wish for in order to ensure that the event will be a success.”

For the young and not so young the show features live action including an Auto-Test competition, parade laps of exhibitors cars and a giant Scalextric Track guaranteed to take the breath away from both adults and kids.

Alongside the more than 200 Classic Car display entries, the show will feature motor-cycles, commercial vehicles plus many rare and unique vehicles. Stars of the show include a 1936 Auburn ‘Boattail’ Speedster and a rare 1961 Daimler Dart.

‘A Blast from the Past’ runs from 10am – 4pm this coming Saturday.
Admission £5 – children under 12 free.
Free parking on site.
More information at http://www.nes-blastfromthepast.co.uk/car-show/