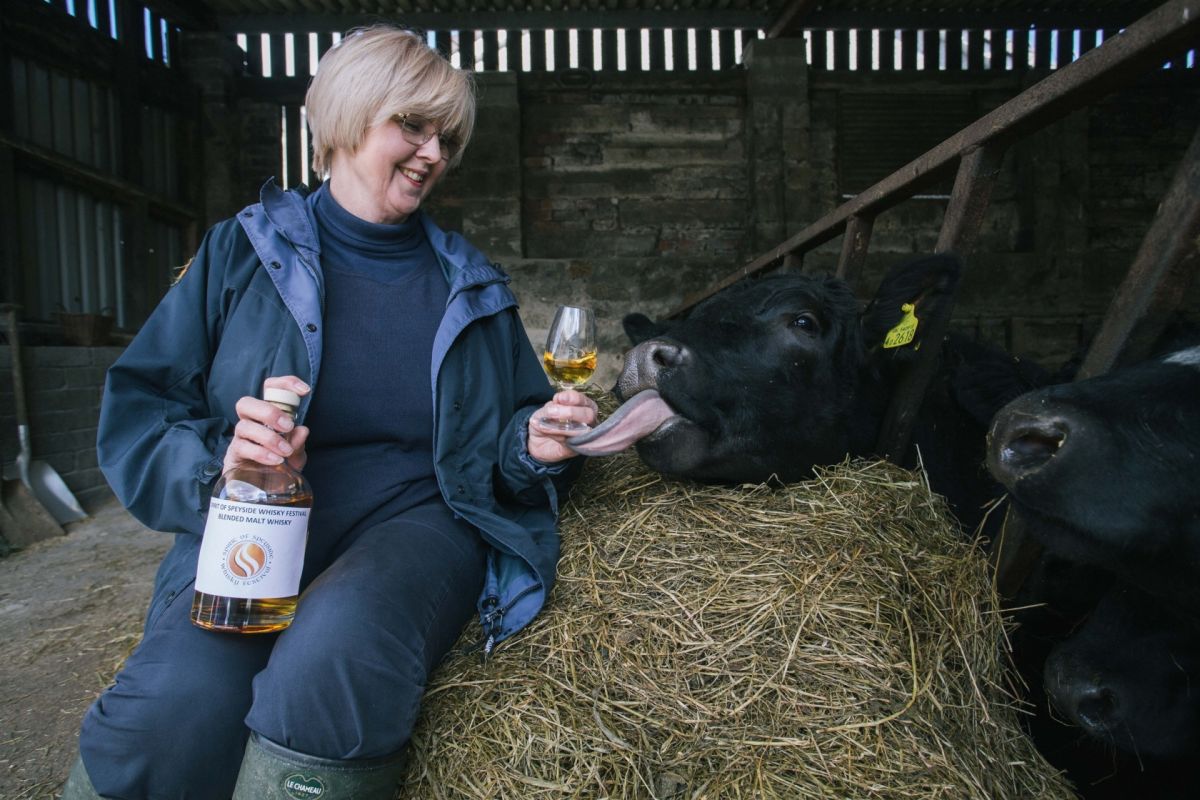 One of the Aberdeen Angus herd cannot wait to get his daily dram from Spirit of Speyside Whisky Festival director Ann Miller.

Farmers on Speyside are being urged to lead a fight back for the Scotch whisky industry after a Japanese malt was named best in the world – by feeding their cattle a daily dram.

A nip of our national drink – coupled with a diet of high quality feed from distillery by-products – could produce meat so succulent and tender that it will rival Japan’s famous Kobe beef.

And it is thought that playing cattle upbeat traditional Scots music, in much the same way that Kobe herds enjoy classical sounds, will further enhance the quality of the beef.

Now there are calls from organisers of the world renowned Spirit of Speyside Whisky Festival for local farmers to help further trial the theory.

Thousands of visitors from all over the globe visit the annual Festival, and organisers are concerned about the level of attention being focused on Japanese whisky.

Ann Miller, a director of the Spirit of Speyside Whisky Festival, says,

“We do not believe there is anywhere on earth that produces better malt whisky than Speyside – and millions of whisky drinkers agree.

“We were genuinely shocked and dismayed when Yamazaki was named the best whisky in the world, but we are firm believers in the old adage of don’t get mad, get even.

“And that is exactly what we intend to do. All the signs indicate that introducing Speyside malt into a cow’s diet and using animal feed created from distillery by-products gives the meat a lovely, whisky-tinged flavour.”

The incredible discovery was made by Speyside farmers Ali Rolfop and Joe King, who have a herd of Aberdeen Angus cattle.

They were mucking out a byre one evening on their farm, Ure Gullybale, near the distillery town of Keith and poured a bottle of single malt Scotch into a water trough.

“I’m a big fan of two of Speyside’s most famous products – malt whisky and traditional music – and so I decided to share these with our cattle.

“The next day, we noticed their coats were shiny and their eyes were bright. We’ve since been sharing a bottle of malt with them and we even have some local fiddlers come down to perform. We tasted the beef from the herd for the first time a couple of weeks ago and it is sensational – there is definitely a hint of whisky in the meat.”

The Spirit of Speyside Whisky Festival takes place from April 28 to May 2 and is one of the biggest events of its kind anywhere in the world. It comprises almost 500 different events, from distillery tours to whisky tastings, from ceilidhs to comedy nights, and from whisky themed dinners to outdoor events.

“With all this focus on Japan, I suppose we are a little worried that the thousands of visitors who fly in from all corners of the globe to enjoy our Festival might be tempted to go there instead.

“But while Japan may have been able to produce some decent drams, it doesn’t have the history and heritage of Scotch whisky. We’ve been producing the best whisky in the world for generations – no beef about it – and while they have learned how to make whisky from us, we’re now learning from their farming techniques.”

Tickets for all events in the 2016 Spirit of Speyside Whisky Festival programme are available to buy now at www.spiritofspeyside.com The Festival is also active on social media – facebook.com/WhiskyFestival and @spirit_speyside on Twitter and on Instagram.