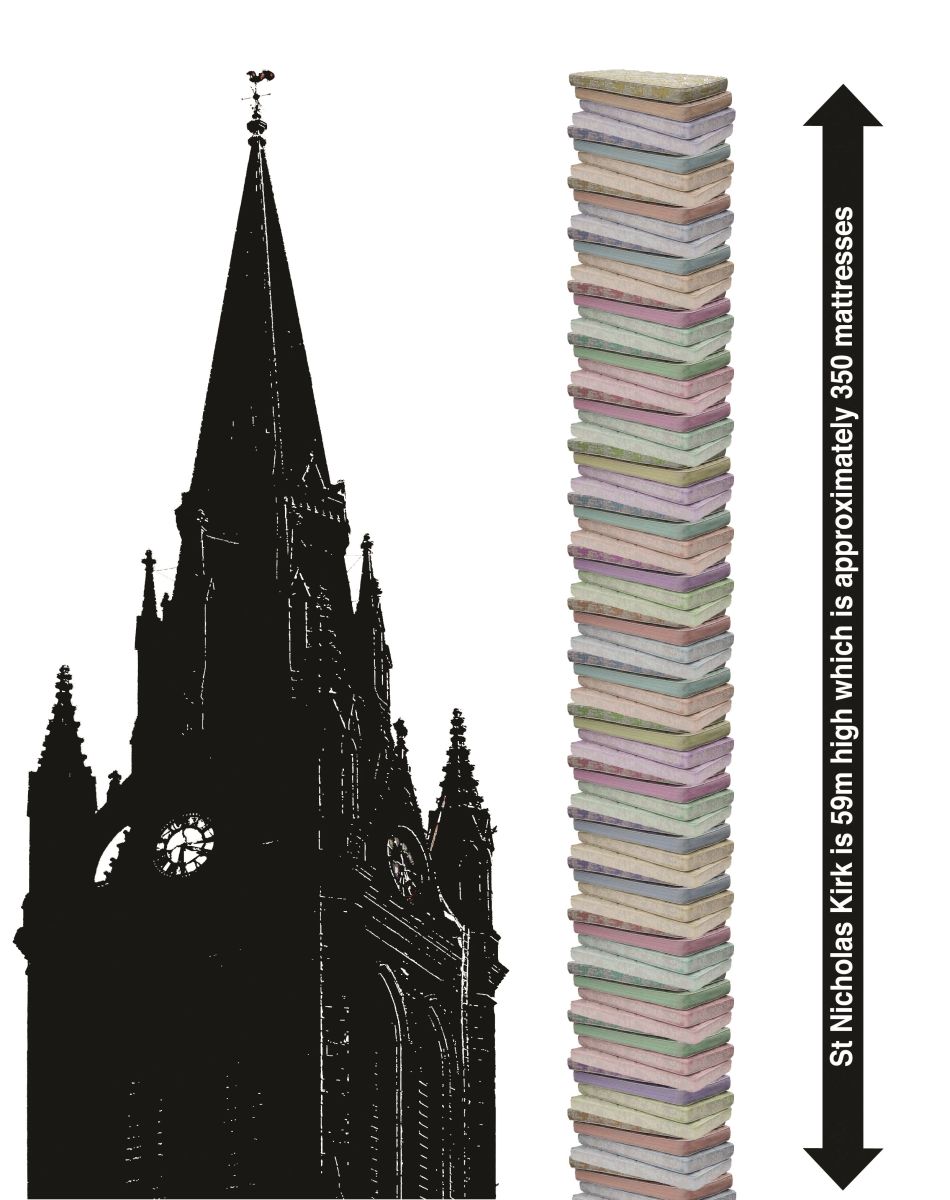 A graphic illustrating the Kirk of St Nicholas and the stack of 350 mattresses representing the beds the charity has provided thanks to previous appeals.

With thanks to Ian McLaren, Innes Associates.

A north-east charity has taken an unusual step in its efforts to highlight the growing scale of childhood poverty that exists in Aberdeen and Aberdeenshire.

Cash for Kids, which has once again been running an appeal to raise money for new children’s beds, has calculated that when all the beds it has provided through its three previous appeals are piled one on top of the other, they stand taller than Aberdeen’s Kirk of St Nicholas.

The well-known city landmark stands at 59m from the ground to the tip of its spire making it the joint fifth tallest building in Aberdeen.

The towering pile of 350 mattresses provided by the charity so far would reach a staggering 63m.

Fundraisers say their lengthy calculation puts into perspective the alarming number of requests it has received for beds for north-east children who have to share beds with siblings or even sleep on a mattress on the floor.

“We wanted to visibly demonstrate the alarming statistics about the number of disabled and disadvantaged children in Aberdeen and across the north-east who simply don’t have their own bed to sleep in.

“We’ve helped more than 350 children since we began the appeal three years ago and the positive impact that these beds have on the lives of these children and their families is very significant. Last year, we provided beds for four children in one family and they were all so pleased with their new beds that on the day they were delivered they invited their neighbours in to see the beds.”

This year Cash for Kids has been running its annual bed appeal to raise £20,000 to enable the purchase of 150 beds for disabled and disadvantaged children under the age of 16 living in the local area who do not have a bed of their own. The appeal once again highlights the issue of poverty in the region that is often hidden.

The 2016 appeal once again featured the unique Scottish Bed Making Championship, which was held at the Crowne Plaza Aberdeen Airport Hotel on Thursday, 31 March. The contest tested teams of four on their bed making precision and speed, with points being awarded for each task. A special blindfolded round was included, which made the task of putting a duvet cover on a duvet rather challenging for some teams.

John Lewis and a number of Aberdeen’s top hotels took part in the event which culminated in a bed making race between the two fastest teams from the earlier heats. It was a repeat of the 2015 final as teams from the Aberdeen Altens Hotel and Crerar Thainstone House Hotel went head to head to be crowned Scottish Bed Making Champions.

In a close finish, the Crerar Thainstone House Hotel team of Nicole Chapman, Alan Curtis, Colin Grieve and Lynn McRae showed that they were bed making kings and queens, clinching the title by a fraction of a second. All proceeds from the contest were donated to the Cash for Kids Bed Appeal.

For more information on the Bed Appeal visit www.northsound1.com/bed.