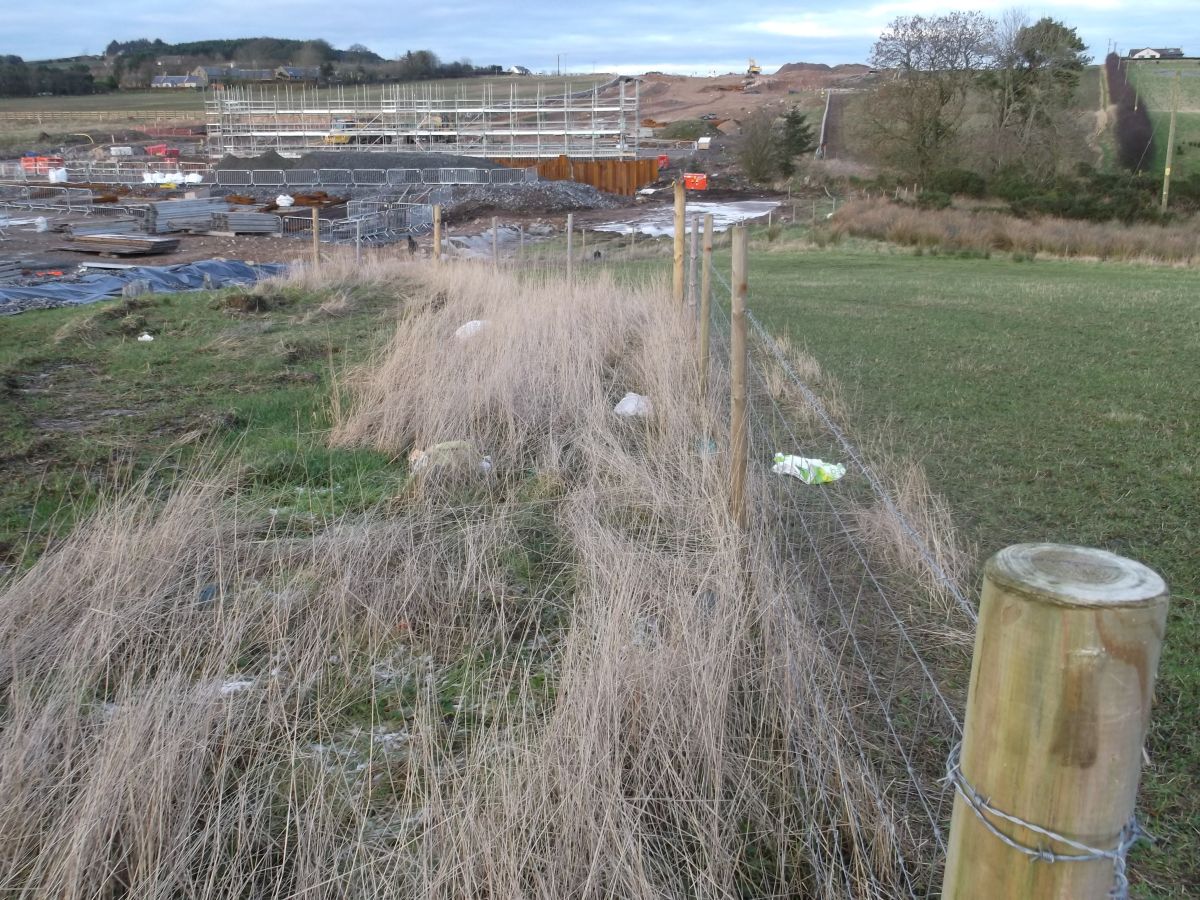 It is with dismay that we watch our beautiful countryside being ripped up for the new Aberdeen bypass here at the Burn of Muchalls.
We are also keenly aware that it is only the start.

Soon we will have 20000 cars passing us, when before it was more like 20, along with all the pollution, fumes, noise and litter.

Our little burn is now constantly full of mud and plastic from the site, industrialising our once unspoilt piece of countryside.

The boast goes that this 36 mile is something to be proud of but is it really? It is the longest possible route destroying thousands of acres of arable farmland, areas of wild habitat and mature trees, disrupting the wild life and the people who live on it, creating a development corridor which is already taking shape (urban sprawl), and encouraging people to use cars. Is this really something to be proud of?

There appears to be no acknowledgement of the loss.

It is already well known that city bypasses create more traffic. A report says Aberdeen will be as congested in 2030 as it is now. A combination of solutions could have benefitted the environment in the city and surroundings.

Forward looking cities like Copenhagen have managed to reduce car usage massively making their city a much healthier place to live. We are now much more aware of the damage that exhaust fumes cause to peoples health, yet, we are still building major roads with more in the pipeline.

We hear a lot about the plight of the Tiger, Elephant and Whales to name just a few but our very own Hedgehog is in danger of disappearing all together down from an estimate of 35 million in the 60s to less than a million now the grey partridge the brown hare the salmon and brown trout all in critical danger of slowly disappearing these are all iconic animals of our land this is borne out by simple observation. People have become used to not seeing these creatures so it has become normal. But in fact, it is a crisis.

Taking in the bigger picture the Earth’s systems are all struggling to cope with the constant and growing demands on her. The sea is polluted with plastic, chemicals and even radiation whilst the air carries all sort of toxins and harmful particles. Our soils are being lost through erosion, roads, mining and many more kinds of developments, and everyone knows about deforestation.

Mining of ores which this road will use is a source of large scale environmental destruction, pollution and displacing of people and animals.

The Earth can heal, regenerate and recover from all sorts of damage. It is a natural process to regenerate, but has to be given time to do so.

Science tells us that the earth has been evolving for perhaps billions of years and humans and other life forms for a relatively short time but still a long period of time and now in our time we have the potential to degrade our home to an unimagined state and this has come about mainly during the last two hundred years. In trying to create a technological wonderland, we are creating a wasteland.

What is peoples’ relationship with our planet? We share many of the same genes with all of life. More and more, science is finding that everything is connected and the destiny of our human and non human communities are connected to the Earth. The air, water and ground is our commonality. We cant simply think it will take care of itself – we have long passed that situation.

If we could find a new connection with the Earth where all life, human and non human, and the land above and below is the effective operating principle in all our human institutions, professions, programs and activities, we would soon bring healing to our damaged planet. This is bound up with our personal relationship to our home. Do we see it as a precious gift?

It is up to everyone to decide what is really important in life and act on that.

4 Responses to “AWPR And Our Relationship With The Earth”