With thanks to Jessica Murphy, Senior Account Executive, Citrus:Mix 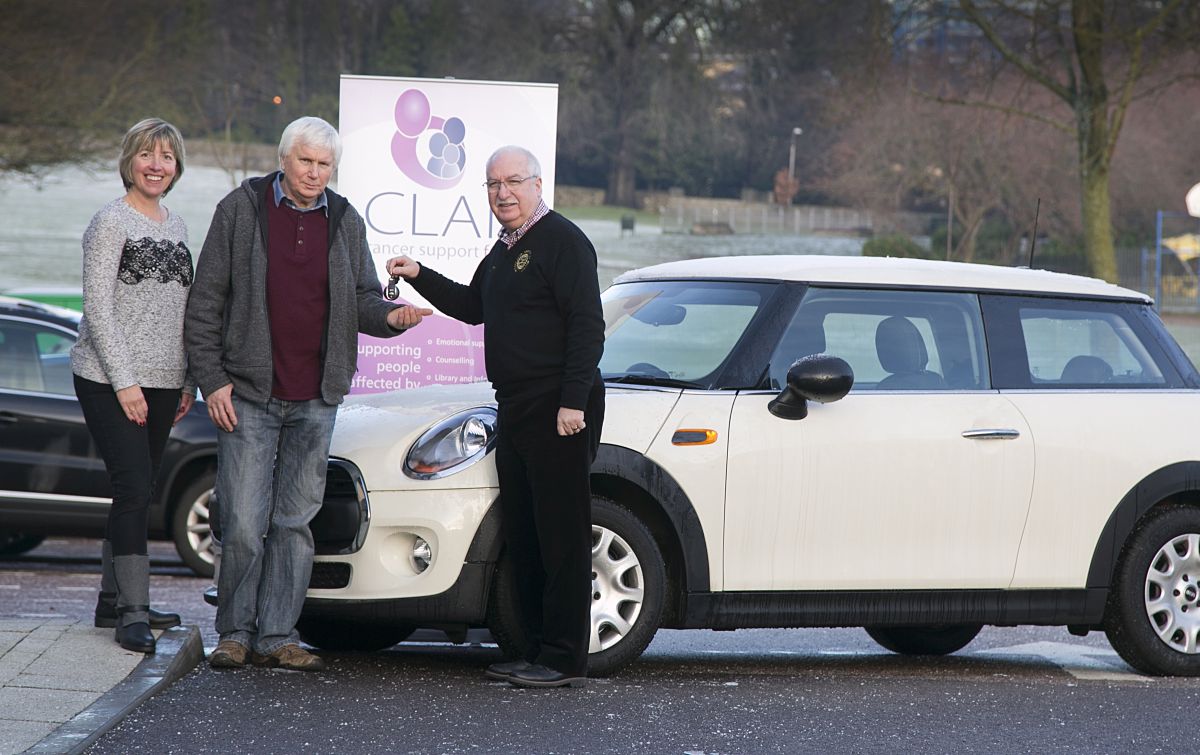 A north-east man whose wife was helped by cancer charities has become the winner of a Mini in a popular annual fundraiser.
Bob Anderson, of Aboyne, bought the winning ticket in the raffle, organised by CLAN Cancer Support and Rotary Clubs throughout the north-east of Scotland, on the spur of the moment on the day of the draw at the Bon Accord and St Nicholas centre in Aberdeen.

His win has been made all the more special as he lost his wife Maureen to breast cancer in July last year (2015), with the pair always doing their bit to support local cancer charities.

“I didn’t believe it when I got the call from the Rotary initially, I thought someone was playing a hoax. It was Susan Crighton of CLAN who then phoned later and I saw her name in the paper so I thought then it must be real. It is a great start to the New Year for me.

“My wife Maureen died of breast cancer in July. She was helped by a number of cancer charities with her care, we always tried to support their fundraising efforts however we could, and buying raffle tickets here and there.

“It was amazing that my ticket turned out to be the winning one, especially as I bought it on the day. I had bought one earlier on at Pittodrie. Local charities like CLAN make such a difference to people and I think it is very important that they are supported.”

More than £56,500 was raised through tickets sale, with the final overall total still being calculated. The raffle is an integral part of the charity’s fundraising campaign and is run by the Rotary, with members of the 22 local clubs running it to support CLAN. All profit is split between the charity and the Rotary club, with the Mini being part-sponsored by Domino’s Pizza.

“It is always a lovely moment when Alan and I get to phone the winner of the draw and tell them that they have won a brand new car. We are thrilled to have presented Bob with the Mini now, although he took some persuading from the Rotary and myself to believe that he had won. We all hope he enjoys it, particularly given the difficult time he has been going through.

“The raffle is a hugely important fundraising tool for us and I would like to give a heartfelt thanks to the Rotary clubs, who help us so much with it each year. Their dedication and kindness really does make all the difference. We would also like to thank everyone that has supported us by buying a raffle ticket.”

Alan Pirie, of the Aberdeen and North East Rotary Clubs, said: “We were delighted to partner up with CLAN Cancer Support again and would like to extend our congratulations to Bob. Our members have been helping by selling raffle tickets at various events the length and breadth of the north-east for the past eight months. It is lovely to see the Mini go to someone who knows how important local cancer charities like CLAN are and the difference they can make.”

Based in Aberdeen, the charity covers the whole of north-east Scotland, Moray, Orkney and Shetland. CLAN has a presence in Ballater, Banchory, Elgin, Inverurie, Fraserburgh, Peterhead, Stonehaven, Turriff, Kirkwall and Lerwick.