Huntly seems an unlikely venue for a film set in the American Wild West frontier. However, when you come up the Aberdeenshire country drive to the Tranquility Wild West Town for the first time, you feel like you’ve stepped back in time. On the weekend of 11 July director Paul Vernon, town founder and script writer Ally Baranowski, actors and crew worked at breakneck speed from dawn to dusk to film the short movie ‘Trail to Tranquility’. Suzanne Kelly was on hand to report – and to take the role of Kitty, Tranquility’s saloon owner. 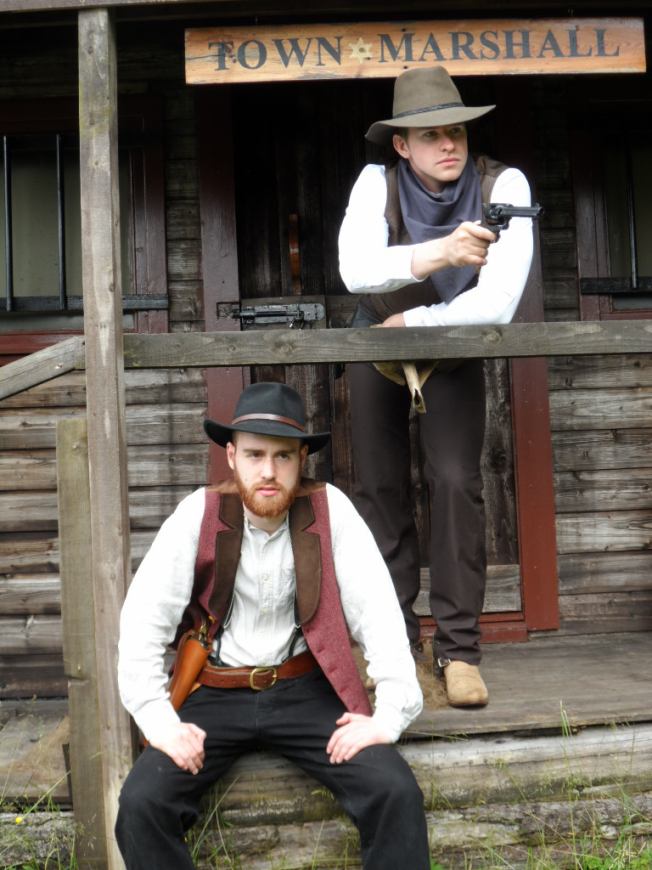 Karl and Michael on the Tranquility set.

Trail to Tranquility is the latest in a series of films to be shot in Huntly’s Wild West Town, Tranquility. When this film comes out in December, condensed to 35 minutes, it promises to be an action-filled, fast-paced adrenalin ride.

Without giving too much of the plot away, outlaws make their way to the little town of Tranquility, where they take a hostage. Battle rages between the US Marshal’s forces and the outlaws, with fatal consequences for some.

Professional makeup artists Deborah Cowan and Kym Murchie did an outstanding job ranging from making up the saloon girls to ensuring any wounds looked realistic.

“Every single participant contributed to this overall project, whether it was a townsperson attending a scene on Sunday morning or a member of the main cast and crew, or even that person making teas, or cleaning out the toilets, to filling up the water trough, or making the director a cuppa! Each and every one is as important as the next.”

The actors came from across the UK; with male lead Mikey Mccallen and others coming from the Southampton area for the shoot.

The cast and crew that made it all happen are:

“This weekend was the culmination of months of preparation by both myself & Paul Vernon, the director & in the last few weeks by Debs & Kym. And over that long weekend everyone managed to gel together as a team so enabling a successful conclusion to the film making.”

December will see the film’s premier at Aberdeen’s Belmont Cinema. Aberdeen Voice will keep you informed of developments and the launch date.