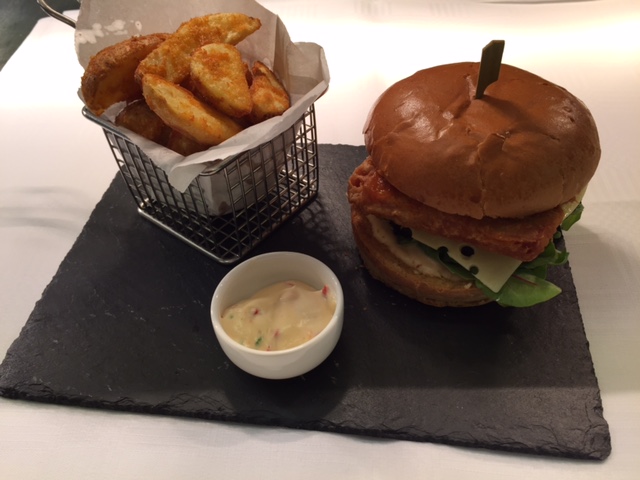 When Andrew Brown, a Merchant Navy engineer from Peterhead, visited the Taste of Grampian Festival at Thainstone centre in June, the last thing he thought he would be crowned was The Aberdeen Skyway Hotel’s very own burger king…and it was all down to a spam fritter.
The Aberdeen hotel was a prominent feature at the local foodie festival, offering samples from its latest aviation themed burger menu.

But what The Aberdeen Skyway Hotel was really looking for was a new invention for the menu, created by imaginative festival goers.

From chocolate to yoghurt, fruit to pigs cheeks; some of the entries could be considered unpalatable. For Andrew (28), his Spitfire creation consisted of an Aberdeen Angus burger, topped with a spam fritter, habenero salsa, Swiss cheese, rocket, chard salad and a hefty spread of chilli mayonnaise. The chefs carefully selected Andrew’s creation because of its creativity and well balanced flavours.

“I couldn’t believe it when the hotel called me to say my recipe had won – it was actually my friend who persuaded me to enter, knowing my love of a good burger. I’d never made the recipe but I knew the ingredients would marry up well.

“I was lucky enough to spend an afternoon with one of the chefs creating my burger and when I finally got to try it, it was every bit as amazing as I’d imagined. The key is in the name though with a definite kick coming from the chilli.

“It’s definitely the most unusual competition I’ve entered and to have my dish on the menu is quite an accolade, even if I do have to put up with my friends calling me the burger king from now on!”

And it would appear that Andrew is not alone in his tastes as the burger has become a huge success since it has been on the menu.

“Guest feedback and input is hugely valuable to us. We strive to ensure that every visitor experience is a positive one; an ongoing achievement reflected in our recent Trip Advisor Certificate of Excellence award.

“We know that the Taste of Grampian Festival attracts keen foodies from the area and decided what better way to develop a new, creative menu item? Thirty people entered the competition and although there were some unusual ingredients, the majority were superb.

“We added Andrew’s Spitfire to the menu at the start of July, giving summer visitors an option to try something unique during their visit. The competition has been such a success that we may look to do it again in the future.”

The Spitfire burger will remain on the menu until the end of August and is priced at £14.