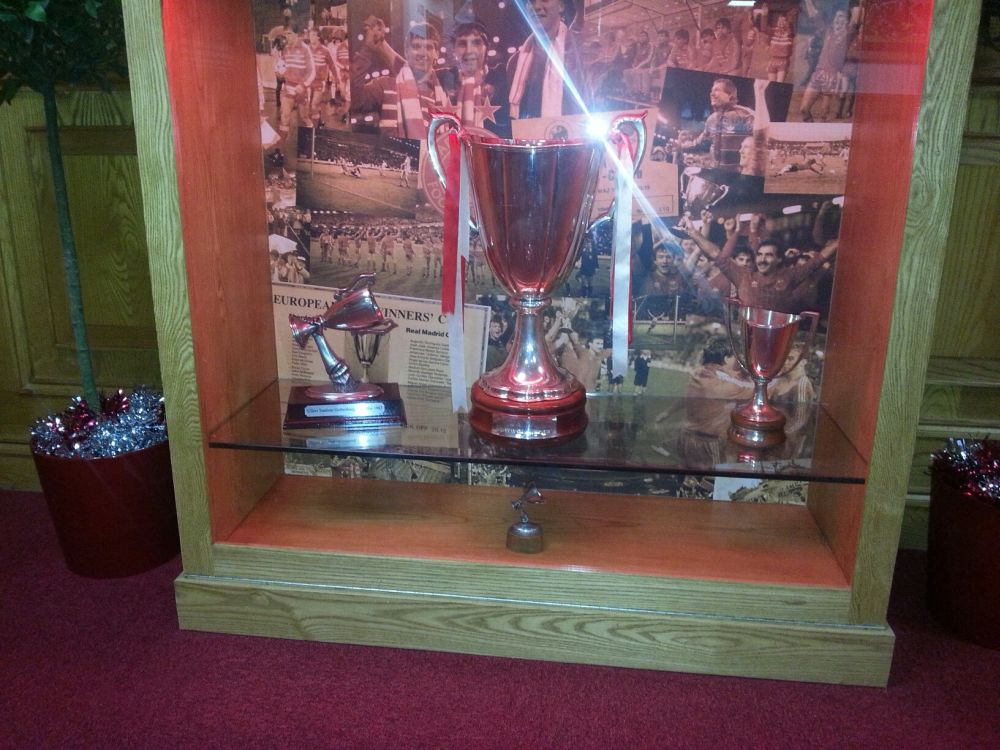 Whilst there was the official business of re-electing office-bearers and approving the Trust’s financial statement, of most interest was the summary of the Trust’s work in the past 12 months, contained in the Chairman’s Report.

Since the end of the 2013-14 Financial Year the Trust and its supporters have carried out a great deal of research and added many match reports to the Trust’s website.

Production of a match programme for the Under 20s has continued and has assisted in raising funds for Trust activities.

A small collection of Aberdeen related medals was purchased – two directly relating to Jimmy Philip, the club’s first manager, from 1903-1924.

Assistance was given to AFC Youth Development in the sale of raffle tickets for the Stephen Glass 1995 Coca-Cola bicycle, and processing of funds to the Youth Development department. Subsequently, negotiations with the raffle winner to bring the bike back to Pittodrie have been progressed.

A new display cabinet was built to display the League Cup in the Main Stand Foyer. With that trophy now destined for elsewhere this season, the cabinet backdrop has been redesigned and alternative items of club history displayed. The cabinet’s dimensions are such that it will accommodate any trophy for which the Dons currently compete.

The Chairman and Secretary have visited Alford’s Grampian Transport Museum and discussed a possible AFC exhibition there in May 2015. We are still considering what would be best to put on show.

The restoration of the 1907 poster by the Scottish Conservation Studio was completed and paid for. Framing to museum standard was arranged and the production of 30 actual size and 300 A3 size prints was also arranged. Selling is ongoing via the Club Shop at £65 per print, including a certificate of authenticity, and profits will be shared with Buckie Thistle.

In October the Big Red Quiz (organised by Trustee Bob Bain) was held and £4000 raised for Trust funds.

In November the annual Armistice Memorial Ceremony was held, on a bigger scale than ever. Gifts were received by the Club and the Trust from the Ghurkha community.

A limited edition of 20 pewter figurines, replicating Willie Miller’s arm and hand grasping the ECWC in his famous pose, was commissioned and received.  This is a 10” version of the item originated and marketed by Dolly Digital, and matches the stature of the mini-replica ECWC given to the club by UEFA. The first of these figurines was put on display in the Main Stand Foyer cabinet (pic above)

A small display cabinet has been commissioned for the Black and Gold Lounge for the display of George McNicol’s boots from 1904.

A collection of bound volumes of The Northern Figaro (a 19th century local weekly) has been obtained and is being scoured for “new” information and pictures from the pre-1903 period.

The next matchday bucket collection for Trust funds will be held when the recently-postponed SPL fixture against Dundee United is played.

A sale of old programmes is being considered, before the end of the season, in the Richard Donald Stand.