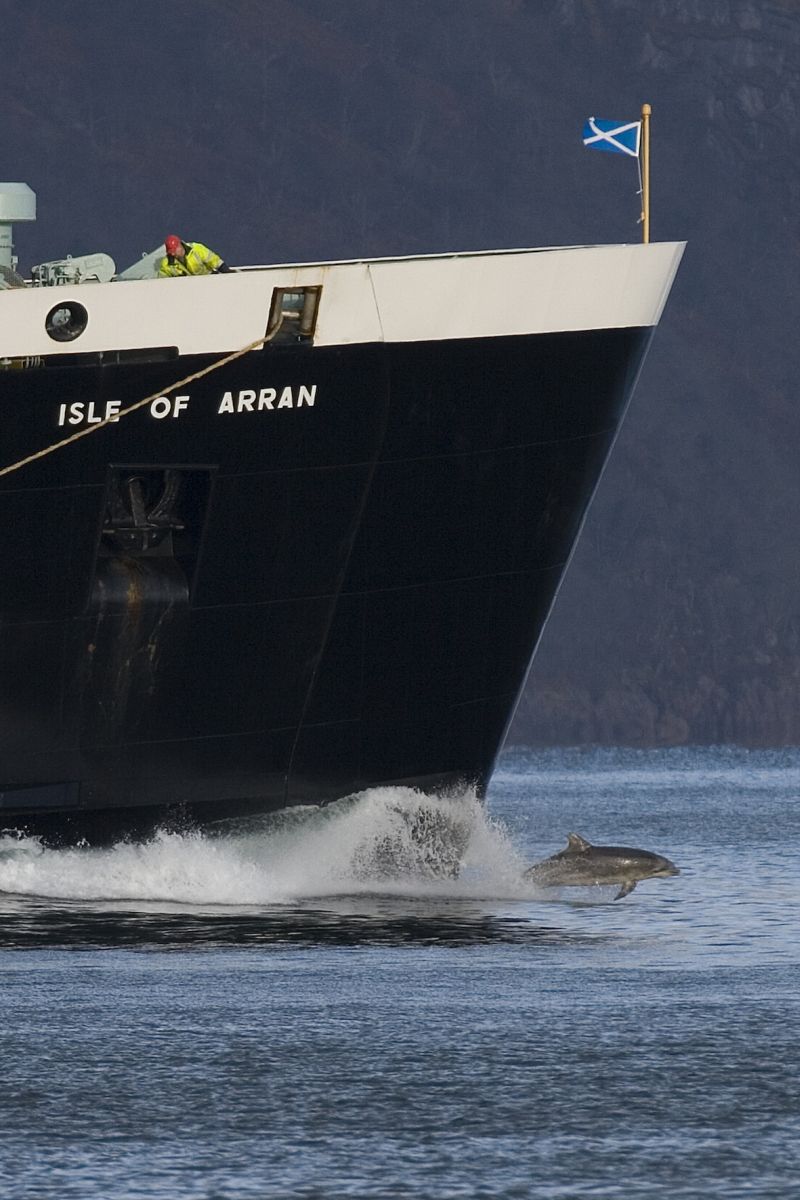 Clet the bottlenose dolphin bow rides a ferry in the Sound of Mull. © Nic Davies.

A solitary bottlenose dolphin that has appeared in Scotland’s Sound of Mull this week is an internationally famous individual known as Clet – who after becoming a celebrity in France and Ireland has now been recorded in Scotland for the first time, say researchers at Hebridean Whale and Dolphin Trust.

The rare sighting of a lone bottlenose dolphin following a ferry between Oban and the Isle of Mull on Tuesday 2 December triggered some rapid detective work at the conservation charity. Bottlenose dolphins are not unusual in the Hebrides, even during winter – but the normally social species usually occurs in small groups, with individuals rarely seen alone

By using photo identification techniques – studying the dolphin’s distinctively scarred dorsal fin – the trust’s experts identified the animal as a renowned individual that made international headlines through its unusual behaviour when last seen in September – in Galway in Ireland, some 600 kilometres away from the Sound of Mull.

“Bottlenose dolphins are usually considered to be resident to certain areas, so long-distance international movements such as this challenge our understanding of this species, and also challenge our ability to protect them using Marine Protected Areas alone.”

The male dolphin was named by locals from Cap Sizun, Brittany in France, where he used to follow fishing boats between 2008 and 2010. He then travelled to Cornwall, Devon and Wales before appearing in West Cork in Ireland, where he spent several weeks interacting with boats. The Irish Whale and Dolphin Group then recorded his movements along Ireland’s west coast to Valentia, County Kerry.

The last recorded sighting of Clet was on 28 September 2014 at Inis Óirr off Galway Bay. Although not confirmed, he was thought to be responsible for a dolphin attack on a group of swimmers in Salthill, Galway. The RNLI ensured that the swimmers were able to get to shore without harm, but unfortunately the incident resulted in some sensational news headlines.

“We think it’s remarkable that Clet’s movements can be tracked to the Irish south and west coasts from France via English and Welsh waters, using images from the general public. The addition of Scotland after a two month interval brings his known tally of passport stamps to five countries and counting, and shows the need for international collaboration when trying to monitor these highly mobile marine mammals.”

Solitary dolphins such as Clet do not pose a threat to people in boats, but can be aggressive towards swimmers. The biggest danger to solitary dolphins is injury from boats, as the animals appear to seek out vessels to interact with. The deep gash on Clet’s dorsal fin may be from coming to close to boat propellers.

Wildlife photographer Nic Davies, who recorded Clet close to shore from Craignure on the Isle of Mull this week, said:

“I was out photographing otters when I heard a loud blow sound just out from the shore, and then I spotted the dolphin heading at speed towards a departing ferry.”

Clet may remain in the Sound of Mull area for weeks or even months, as he has done in other areas. Hebridean Whale and Dolphin Trust is asking boat owners to be respectful and to give Clet the space he needs, and hopes that the dolphin will continue to enthrall onlookers from the shore and from the ferries, which he has been bow riding in the Sound of Mull.

Hebridean Whale and Dolphin Trust is asking the public to report sightings of whales, dolphins and porpoises – collectively known as cetaceans – and basking sharks at www.hwdt.org. The charity’s extensive Community Sightings Network uses such sightings as a key way of strengthening understanding of the local marine environment and of these spectacular animals.

High quality images of cetaceans and basking sharks can be emailed to the trust at sightings@hwdt.org. This helps in photo identification research – a technique that allows individual cetaceans or basking sharks to be identified by their distinctive markings, often shedding new light on population sizes, social dynamics, and areas of important habitat.

Volunteers are also wanted to join the trust’s research expeditions on its specialized yacht Silurian next summer, working alongside marine scientists.

The bottlenose dolphin is a highly protected species under EU law, and the Hebrides marks the most northerly reaches of their geographical range. Some of the biggest bottlenose dolphins in the world have been recorded in Scotland, where individuals usually grow to 3.5 metres in length.  Over 70 individuals have been catalogued in western Scotland.

Hebridean Whale and Dolphin Trust is working to secure the future of western Scotland’s cetaceans and the Hebrides’ globally important marine environment through education, research and engagement with local communities. For details call 01688 302620 or visit www.hwdt.org.