Mid-Formartine councillor Paul Johnston is backing Green calls for cycling routes in parallel to the A90 from Balmedie. 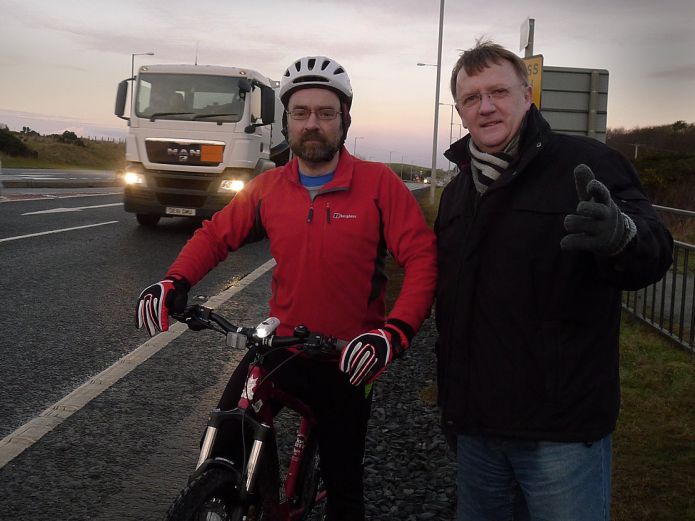 Local Green campaigner Debra Storr said: “As part of the AWPR and Balmedie-Tipperty dualling, there has been talk of providing an adequate cycle route alongside the A90 into Aberdeen and out to Ellon.

“But there is nothing from either Transport Scotland or in NESTRANS’ latest Business Plan that would start to put infrastructure on the ground.”

“It is time to stop spending money asking people to walk and cycle more and to actually provide the infrastructure needed.

“There are hundreds of millions of pounds being spent on the AWPR and the Balmedie-Tipperty dualing.  A tiny proportion of that would deliver a safe cycling route.  Cycling into the city will get much worse along the A90 with the two grade-separated junctions at Balmedie and Blackdog being particular hazards.”

“It is clear from NESTRANS’ own monitoring report that their efforts over the past decade have been fruitless with an increase in cycling from 2% to 2.5% modal share in the City called a ‘notable achievement’.  But as they do no monitoring themselves and rely on the local Cycle Forum, even these figures are doubtful.

“The more robust census result show continued drops in people cycling to work with cycling less than 1% and falling.  The current spend on promotion is clearly pointless without the infrastructure on the ground to match.”

“I asked both Councils about their existing cycling infrastructure in April.  Aberdeen City Council believes it has about 100km of shared cycling/walking paths, 67km of advisory on-road cycle path and a couple of km of off-road and mandatory cycle paths.  Aberdeenshire doesn’t even keep records of this.

“I think this speaks volumes of the priority given to cycling and unless both councils focus on providing cycling infrastructure that people want to use, cycling will remain the preserve of a few very brave souls.  The only way to encourage everyone to cycle more is to make space for cycling and that needs dedicated cycleways that are safe for everyone.”

One Response to “Green Campaigners Highlight Need For Cycling Investment”