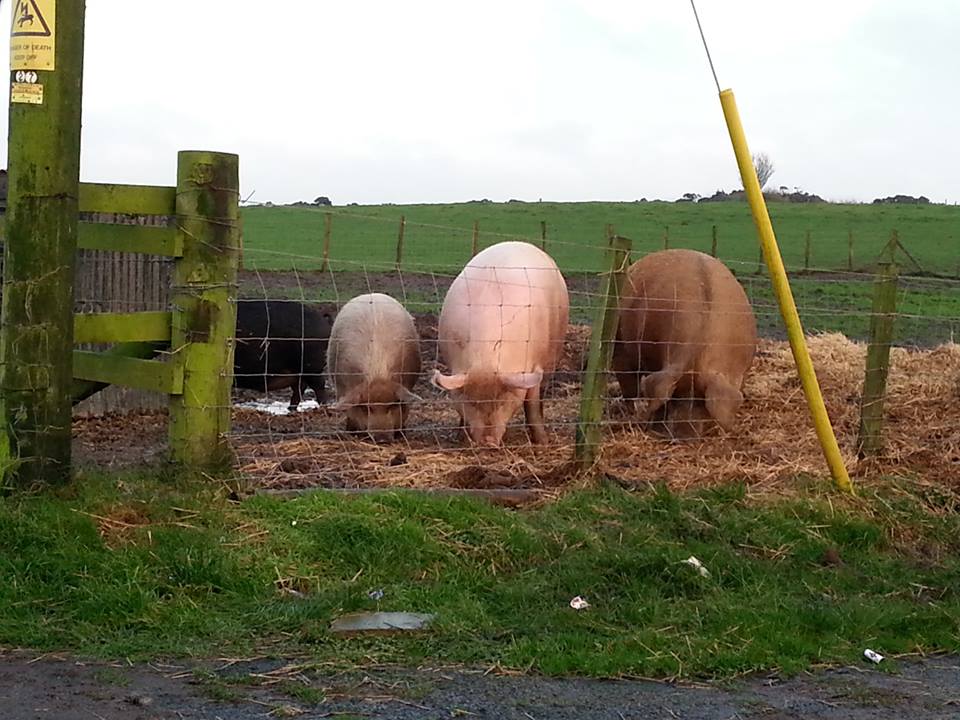 My partner and I, with the best of intentions, have been meaning to get out to Willows for about three years now. Something always comes up, and until last weekend it was something we always talked about doing but never got around to.
Then a good friend of ours mentioned the Christmas Open Day and we decided to put words into deeds. We were so glad that we did.

Saturday November 22nd greeted us with dreary grey skies and a depressing cold drizzle which very nearly crumbled our resolve, but Willow’s weren’t cancelling so we decided that we wouldn’t either.

Donning warm clothes and sensible shoes, we headed out from Aberdeen with some classic Nick Cave on the car stereo and a watery sky creating some beautiful lighting effects across the various hills and fields along the way.

It really is a lovely drive out there. Willow’s is located just past Ellon in Pitsligo and we were there before we knew it.

And so was everybody else. What a turnout. The weather held and people came. The car park was full and there was a wonderfully festive, family atmosphere.

First stop, the gift shop. Full of all sorts of nick-nacks, I found a brand new pair of Wellington’s for a fiver. And my partner found two collectors item Cat Stevens records that he’s still chuffed about. But I digress.

We spoke with a very friendly young man who sold us our new treasures and asked him how long he’d been with Willow’s. Turns out, he had volunteered there for two years and had recently become a full time paid staff member. You could see how happy he was about that and how much he loved his job, and it reflects in the care of the animals. So many animals.

We paid our tiny entry charge, (only £3 each) and noted the cafe that housed our future caffeine fix and we were then let loose inside the sanctuary proper.

Kids and adults alike were having a grand time and so were the numerous free roaming cats who were making the most of all the attention they were receiving.

I have never seen so many chilled out cats in one place. They were everywhere. Sleeping in the straw next to the ponies, hanging out on top of the stall fences and winding themselves around our legs looking for a good ear scratch. And who am I to deny a cuddly cat a good cuddle.

Needless to say, I didn’t get very far to start with. At one point I was attending to two cats simultaneously while a third tried to climb on my lap. I had forgotten how lovely it is to scratch a cat behind the ears and listen to it purr. 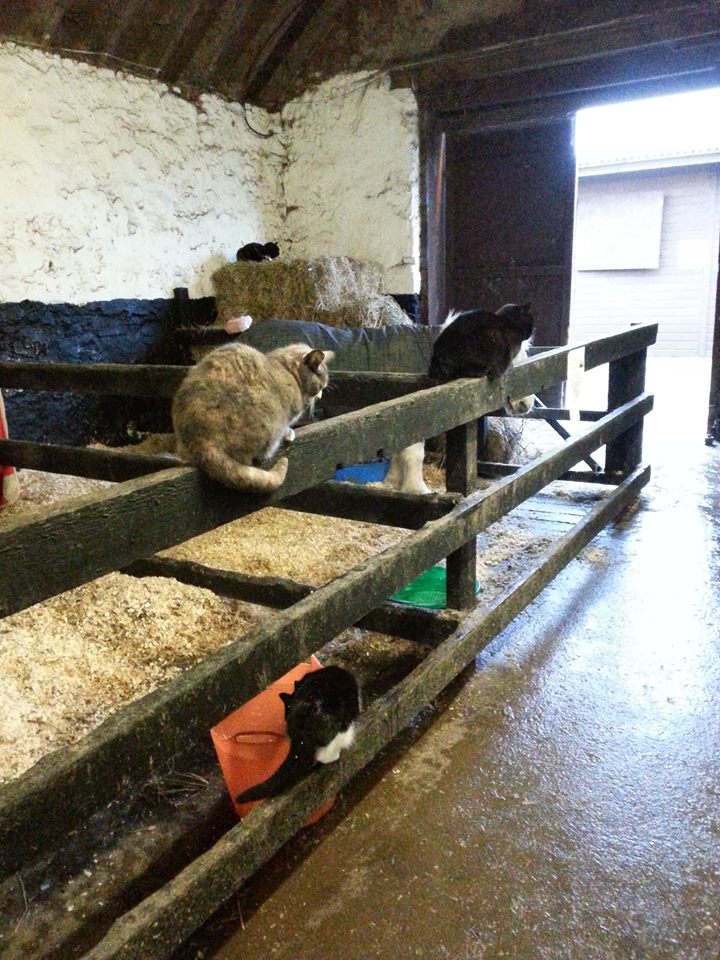 We followed the cats and the people out of a lovely old stone barn that housed the Shetland ponies and the Cat Hotel, and discovered a cosy warm shed that houses the rescued lizards, turtles, snakes and even hedgehogs. Each habitat was immaculate and it was clear how well cared for each animal was.

Adjacent to ‘The Beastie Hoose’ was one of a number of stables, home to the numerous rescued horses that have found their forever home with Willow’s. Again, each animal was relaxed and clearly well cared for.

Some happily munched hay and ignored us while others sniffed us hopefully for treats.

Each beautiful horse had their name and history attached to their stall. Every one of them is in a significantly better place now.

By this time I’d lost my partner who was off looking for the bunnies. I turned a corner and was greeted by some very curious chickens and a peacock. No, wait…Three peacocks. All with full plume and one of them showing off said resplendent plumage to a couple of indifferent chickens who were playing hard to get. The species barrier didn’t seem to bother him but he was at least being quite gentlemanly. Perhaps he should have bought them dinner first.

I could hear goats and a donkey braying up ahead so I left my pretty friend to it and after being waylaid by yet another affectionate cat (this one called Simba, who would grab my hand with his paw when ever I tried to leave) I came across some adorable goats, a very shaggy Llama, two spectacular owls, a ferret enclosure, some very sleepy ducks and…. the bunnies.

You may have worked out by now that we’re rabbit people. There’s just something about a cheeky, binkying rabbit that will steal your heart when you’re not looking.

They are the UK’s third most popular pet and also the most misunderstood. Because of that, people buy them as novelties not realising the level of care that goes into looking after a rabbit properly. So it was great to see the impressive habitats that Willow’s have set up for the rabbits in their care.

It was around now that the gentle acoustic guitar music that had been playing on the out door speakers was replaced by the voices of numerous children from the Pitsligo Primary School who were performing their Nativity play. Cute children everywhere. Have I mentioned the wonderful family atmosphere? I can’t think of a better place to take kids of any age for a fun day out.

A lot of the donkey’s and horses will let you gently stroke their noses and teaching kids early on the value of an animal in such a fun and interactive environment is priceless.

I spoke to another staff member. A pretty young girl in her mid-teens who was still in school. She too had been volunteering for a long time and helped out every weekend. She hoped to also work at Willow’s full time one day and to see such dedication in one so young was a wonderful thing.

With so much to see and so many cats to cuddle, we hadn’t even made it into the barn yet that was full of market day stalls. With such a great turnout of people, hopefully they all did well and there was certainly something for everyone. 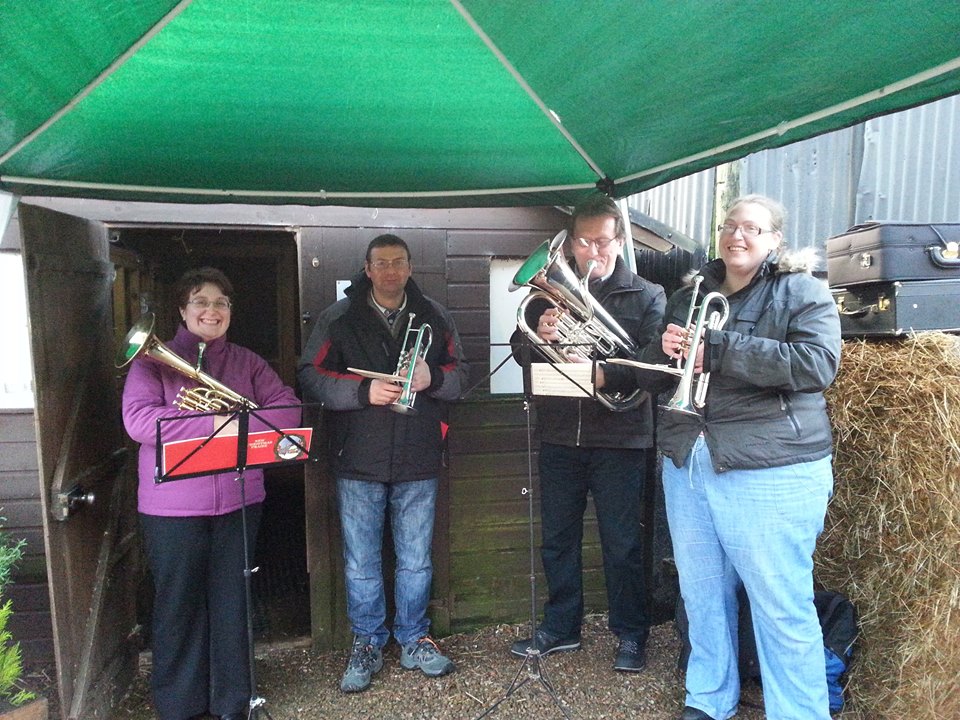 Without realising it, nearly three hours had passed.

The brass band set up and started to play wonderful Christmas Carols and we went in search of that pre-arranged coffee. I’m not joking, it was one of the best cups of coffee we’ve had in years.

On the way back to the car, I realised that I hadn’t taken a picture of the lovely foursome serenading us, so they very kindly posed for me and then played a beautiful carol. What a way to end a perfect day.

We waved goodbye to the fat, happy pigs by the gate on the way out and unanimously agreed that we had had an awesome time.

The love and dedication that goes into looking after the multitude of animals in Willow’s care is inspirational. It’s clear that it’s a way of life for the people who work there and it reflects in the demeanour of the animals.

We left feeling like we wanted to be a part of that too. Willow’s is a very special part of the Aberdeenshire community. They are often the last resort for many of the animals in their care and with our support they can continue to do what they do so well.

We will be there will bells on for their next open day and we’ll be taking our friends with us next time too.