In Part 1 of this series, excessive, expensive security measures and their implications for civil rights were examined. The second part of  the series looked at the problems of racism in the UK’s police forces as experienced by suspects, victims of crime (and victims of police actions), and even police officers.

This third article in the series, deals with the outrageous exploits of the so-called ‘Special Demonstration  Squad’ and how it sanctioned its undercover operatives to sleep with and impregnate innocent women. What has happened to democracy, basic human rights and an accountable, law-abiding police force?  Suzanne Kelly reports, concluding that the police are out of the control of the top brass, and undercover police have ruined lives when using  deceit to trick women into sex and into bearing children. 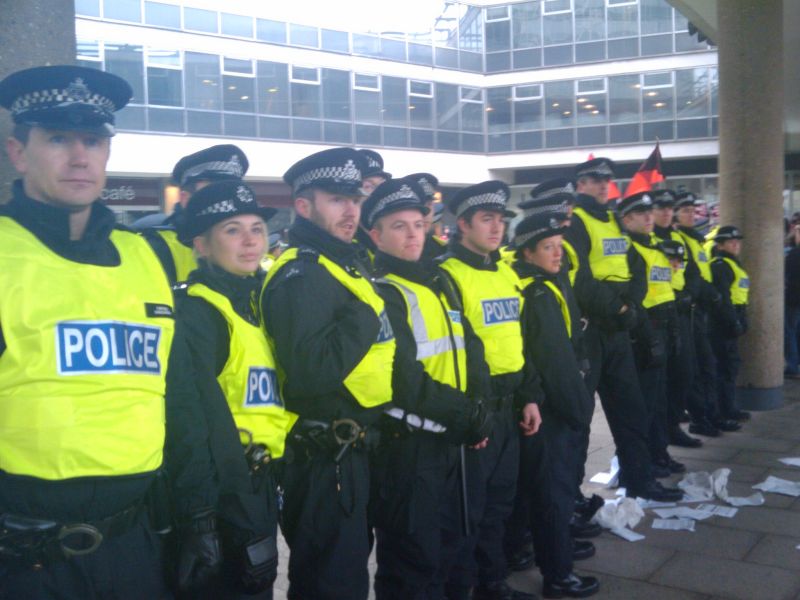 Imagine you are a woman, interested in the environment, and involved in a protest group.  Over the course of 7 long years you have met a like-minded man in your group.

You sleep with him, believing you have found someone with similar interests. You have his child. You have shared your thoughts and your body with this man you care for.

He is actually a policeman sent to spy on you, for seven long years.

You are not a criminal, but all of your rights, your privacy and your dignity have been taken away. And all the while, he has a wife and family.  What is the response of the Metropolitan Police? That the two of you had a mutually agreed relationship.

You find that the police, meant to  protect you and your rights have used your body as a tool and for gratification; your rights are gone, and they say you wanted it. This is not fidelity, bravery or integrity by any possible definition.

The right to protest has been escorted from the building

The Guardian’s Rob Evans reported in August of this year:

“Boyling had sexual relationships with at least three women while posing as an environmental activist, under the false name of Jim Sutton, between 1995 and 2000. He later married one of them and had two children with her before they divorced in 2008.

“Both were members of Scotland Yard’s controversial undercover unit, the Special Demonstration Squad, that infiltrated hundreds of political groups between 1968 and 2008. Last month, the Met was criticised after it was revealed that the unit had collected information on 18 grieving families who were campaigning against police.

“In a legal filing at the high court, the Met denied that Lambert and Boyling were authorised by their supervisors to form the relationships with the women or that “intimate and sexual relationships were started as a deliberate tactic” to gather intelligence about campaigners.

“The Met said that the pair “violated explicit guidance” from their managers that undercover officers should not have long-term, or “emotionally committed” relationships during their deployments.

“The Met said that the two men started the relationships “because of mutual attraction and genuine personal feelings”.

“Harvey said she was “very upset” by the Met’s stance, adding that her relationship with Lambert was “a total violation of me and my life”.

“She said: “How can a relationship be genuine when it is based on a massive web of lies? He pretended to be a man with noble ideals and political commitments, when in reality he was a police officer spying on our friendship network.

“He pretended he was committed to the future when he always knew he would go back to his real job and wife and kids. That doesn’t show genuine feelings; it is abuse and I would never have consented to such a relationship had I known.”

Public outrage continues to grow, and undoubtedly will not abate – further details are expected to emerge as the legal proceedings commence.  The judiciary have insisted that the identity of these two particular policemen and their photos should be released; a photo of Boyling can be found in Evan’s article.

The police top brass seem to believe they can plead ignorance:  they say they had no idea what their deep undercover police were doing.

This is as implausible as it is damning – it is as if those in charge of The Met believe they can disavow the actions of their own operatives.  However, this is real life and not  ‘Mission Impossible’ wherein the operatives are told that if they are captured or killed, those in power will disavow knowledge of their activities.

The police will eventually have to explain in a court what kind of logic they used which trumped basic human rights, law and the integrity they claim to uphold. For now, they are doing what they do when cornered:  they have gone on a public relations offensive.

The best defence is a good PR offensive

The Daily Mail have interviewed an undercover officer recently; he was keen to paint himself as a selfless, life-risking hero, not someone subverting democracy to illegally gather intelligence and evidence, which when all is said and done is the base line of any undercover work.

This rather florid article paints ‘John’ the undercover operative as some form of saint; its description of him is hardly hard news:

“His own eyes are clever and often amused. But they also have an opaque, poker-player quality which you might associate with an assassin who sees the moment of death as business rather than pleasure.”

Remarkably this ‘John’ has suddenly been authorised by the Met to spill the beans to the world about how tough it is being an undercover police operative dealing with paedophiles, underworld figures and drug dealers. John steers well clear of admitting that women such as Harvey, an environmental activist, are the sorts of people being spied on, seduced and tricked.

“‘At the same time you are treading that very thin line, showing enthusiasm for what they are doing but not inciting it. To show that — dare I say it — we are catching them fairly.”

“And catch them they do. Over the past 12 months, undercover operations in the Met have resulted in 1,400 charges against individuals for the full range of serious criminality. Many will go to jail.” IBID

This Mail piece asks no hard questions; it swallows the tales ‘John’ tells the Mail reporters unquestioningly – yet ‘John’s main skill in this life is to deceive. There is not any analysis of ‘John’s potential motivations for leaking these details to the press (keeping his job, making the force look better – as if that were currently possible, pleasing his superiors who while claiming ignorance of Harvey’s situation have sanctioned this interview).

Also lacking is any in-depth question as to why the Met, heading to court to explain itself over its Special Demonstration Squad, would find this piece a good piece of PR.

What’s the Problem? A Government Minister insists police should sleep with women they investigate

You might think that any person interested in upholding democracy, freedom and the most basic of human rights would be appalled at what has happened (and might still be happening). You would be wrong.

As reported in the Telegraph as concerns another sexually active undercover officer, Mark Kennedy, Nick Herbert justifies this behaviour:-

“Nick Herbert told MPs that if there was an outright ban on officers carrying out secret missions from starting relationships with those they had under surveillance, it would create a simple way for their loyalties to be tested.

“He said he did not think there needed to be set rules governing sexual relationships involving police, but that instead officers infiltrating groups and gangs needed to be managed closely.

“The police minister said in a Westminster Hall debate on Wednesday: “I am not persuaded that it would be appropriate to issue specific statutory guidance under Ripa [the law that governs undercover operations] about sexual relationships.”

If the police minister thinks the policy of impregnating duped women is fine, he has given the nod to the department to carry on. It will be interesting to see what his constituents think of his stance at the next elections.

Not for Women Only – the cases of Barry George and Colin Stagg.

Police work should be based on physical evidence, motive, and verifiable facts. But if that fails, you can always send in a woman police constable to have sex with your suspect. The ‘honey trap’ method of crime detection has put men in prison after they were led to brag in response to leading questions while being sexually and mentally manipulated by women ‘law enforcement’ personnel.

In the case of Colin Stagg, the presiding judge who quashed his unsound conviction called the use of honey traps ‘reprehensible’. Further information on this and other such cases can be found here http://www.telegraph.co.uk/Jill-Dando-Miscarriages-of-justice

Never Again – well, so we can hope.

Perhaps 1400 people are being charged for offensives in ‘the full range of serious criminality’ – the reporters have no interest in finding out how many people were spied on without any crime being brought to light. How many innocent people had their rights removed by a squad which we are meant to believe acted unilaterally? How many other factions within the Met are acting unilaterally that we have no idea about?

If efficient, legal policing cannot prove a crime is / will take place, then is covert evidence-gathering really legal or ethical? If the activities of Boying and crew against environmental activists are upheld as being acceptable policing, then are any of us safe to protest? We need to talk about the police, but we need to ensure that nothing like this happens again.

The court cases will be crucial in shaping the UK’s future human rights policy.  Whatever the outcome, there are women who have been treated like chattel by the Met, and this can’t be undone. Imagine bringing up the child of the man who has a wife and child elsewhere, who tricked you into bed.

There is a group supporting these women; it is Police Spies Out Of Lives; and it provides details on many such cases http://policespiesoutoflives.org.uk/  and donations are welcome.

But at least these women are alive. The next article in this series will look at the increasing use of guns and lethal force by the police.