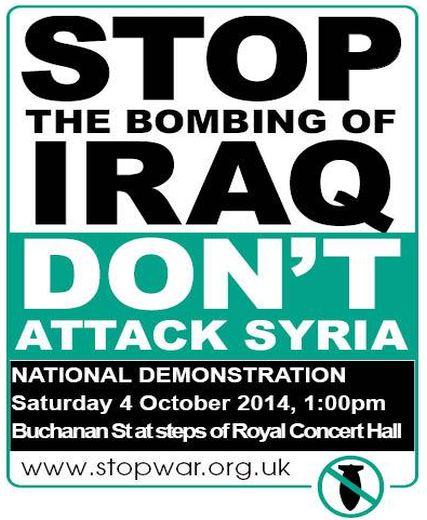 The Wests policy again and again in the Middle East has been to use military action. In the case of Iraq, Afghanistan and Syria firstly we arm groups to fight what we see as enemies.

Then when they go much further than we had planned we demonise them whether this is the Taliban, Sadam Hussein, Qaddafi, Assad or ISIS. We use this demonisation to get the public on our side and then we attack them.

We have seen the results of action by the West in Afghanistan, Iraq and Libya which include the killing of innocents, the destruction of infrastructure, fragmented broken societies and the creation of bitterness and violence.

We fail to learn from previous experience and keep doing the same again like a stuck record. We have failed to understand the Middle East and its religious and ethnic complexity and have turned different sections in societies against each other and made lots of money by arming all sides and in the taking of military action ourselves.

In the case of Syria, Western Governments were quite happy in letting Saudi Arabia, Quatar and Turkey give military and financial support to Islamic groups.  The enemy was seen as Assad and his Iranian, Hezbollah and Russian backers. Assad was painted as black and his opposition were angels fighting the just cause. No wonder young impressionable muslims have gone to fight with this appalling ISIS.

The beheadings by ISIS were barbaric and made worse by the fact that those they beheaded were aid workers and in the case of James Folley a strong critique  of NATO intervention. However the Israelis killed 2,100 people in Gaza including hitting schools with children in them so why have there been no airstrikes on Israel.

Saudi Arabia who have been the main funders and suppliers to ISIS have beheaded 59 people so far this year why not bomb them—oh no they are our allies and we make lots of money out of them by selling them arms. One Shia militia selected rounded up 40 Sunnis in Baghdad so why do we not bomb them?

Over 2,400 people have been killed by US drones with people having their heads blown off. why don’t we bomb the White House?

Hundreds of thousands of people have died in the conflicts in Iraq, Libya and Afghanistan and we have almost totally destroyed the infrastructure of these countries yet our leaders walk around with immunity. Since the bombing has begun ISIS has it says gained 6,000 recruits.

Phylis Bennis in The Progressive gives four reasons why ISIS has grown and goes onto suggest six alternative steps to deal with ISIS.

3 Responses to “Middle East – What A Bloody Mess”