In 2011, Jonathan Russell wrote three articles on the Libyan conflict in Aberdeen Voice, in part because of the lack of public outcry. Here he presents the first part of a new four article series. 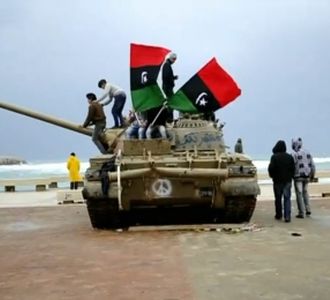 Amnesty International and Human Rights Watch both had observers on the ground for months following the rebellion in eastern Libya, and both have repudiated every major charge used to justify the NATO war on Libya, which was meant to have been about imposing a No-Fly Zone as agreed by the United Nations.

The video “Libya War Lies – Worse than Iraq” which can be found on Youtube at http://www.youtube.com/watch?v=rNWf1kw2eUk  , is the work of Thomas Mountain, author of the widely read article by the same title, and explains his perception of the real reasons for the war on Libya.

The media also played an important role in galvanizing public opinion, in particular Al Jazeera whose output was trusted particularly by many people in the Middle East including Libyans and by those in the West who had come not  to trust their own media.

Al Jazeera reported on 22nd February 2011 that Libya’s Government carried out airstrikes on Benghazi, Tripoli and elsewhere. Both observers and Russian satellite pictures have said since that this was not correct.  Many Libyans who supported the uprising now regret their support, not only because they were misinformed, but also because of the appalling state that Libya now finds itself in.

Below is a clip from the speech by Denis Kucinich, who stood twice for the Democratic Party leadership in Congress, suggesting that the military intervention was pre-planned. He raises concerns about both the abuse of the United Nations and democracy in the USA. You can see three further clips of his speech on Youtube.

Congressman Dennis Kucinich’s address to Congress on the War in Libya:

There were no confirmed accounts of helicopter gunships attacking civilians, and no jet fighters bombing people, which completely invalidated any justification for the No-Fly Zone in the Security Council resolution used as an excuse for NATO to launch its attacks on Libya. There were some tragic examples of rape on both sides of the conflict. However, the stories of mass rapes by Government troops were never verified.

‘What has happened in Libya since the conflict is, however, far worse than could have been suspected and has been highlighted again with the flight of Prime Minister Al Zeidin fleeing the country this Wednesday. So much goes on in the world and particularly the Middle East that there is little news coming out about Libya.  What we have heard about is the killing of the American ambassador in Benghazi and the taking hostage of the Libyan Prime Minister by a militia group; and most recently the killing of a UK citizen and his New Zealand partner.

The general impression is that the country is lawless.

Sir David Richards, leader of the British NATO forces at the time of the invasion of Libya, has said on BBC Radio 4 recently that Qaddafi has been proven right in what he said would happen to his country following his fall from power. That is, that the country would fall into the hands of Islamic extremists and there would be inter-tribal fighting.

When looking at the situation more closely what you see is a broken country – the basic facts are:

Here is a clip from Russia TV: