A freestyle performer who has captured the imagination of the football world with his skills will take centre stage at an event which will draw thousands of students to Aberdeen city centre. With thanks to Paul Smith. 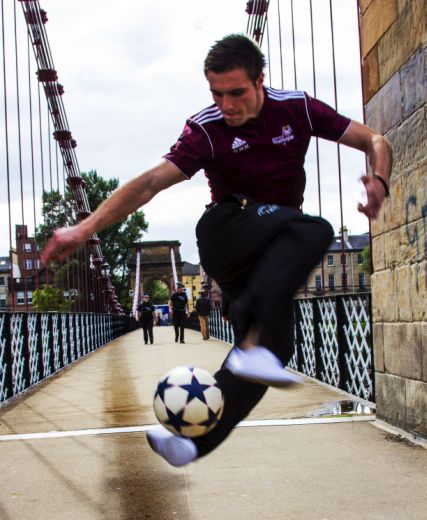 The Bon Accord & St Nicholas shopping centres will host their annual Lock In on Wednesday (September 24) and this year’s event will have a sporting twist.

The Lock In, open exclusively to students, attracted more than 4,500 people in 2013 and an even bigger turn-out is being predicted as the popularity of the concept grows.

Retailers are offering a range of discounts for the student crowd, with up to 30% off purchases on the night as well as special giveaways.

Around 45 stores in the two centres will be open on the night, which will run from 6.30pm, with a host of entertainment and attractions also on offer – including DJs and pop-up bars.

Renowned Scottish freestyle footballer David Mennie will be thrilling the Lock In crowds with his inventive repertoire, with the Glaswegian’s skills taking him across the globe for performances and competitions which have earned him a place among the world’s elite.

“The Lock In is a fantastic evening, bringing students from Aberdeen’s two universities and North East Scotland College together. There is a unique atmosphere and we’re looking forward to another great night. The Bon Accord & St Nicholas retailers really embrace the occasion, with some fantastic offers throughout both centres.

“Having David involved will certainly add to the excitement of the Lock In. He performed in front of tens of thousands at last year’s Champions League final at Wembley but I’m sure the Aberdeen crowd will give him just as warm a welcome.

“There will be lots to see and do on the night, not to mention some fantastic offers, and it will be a lively way to start the term for the students who come along.”

Further information on the Lock In is available at www.bonaccordandstnicholas.com. Issued on behalf of Bon Accord & St Nicholas by Citrus:Mix.