The 32nd annual Grampian Motorcycle Convention took place at the Grampian Transport Museum on Sunday 7th September. With thanks to Martyn Smith. 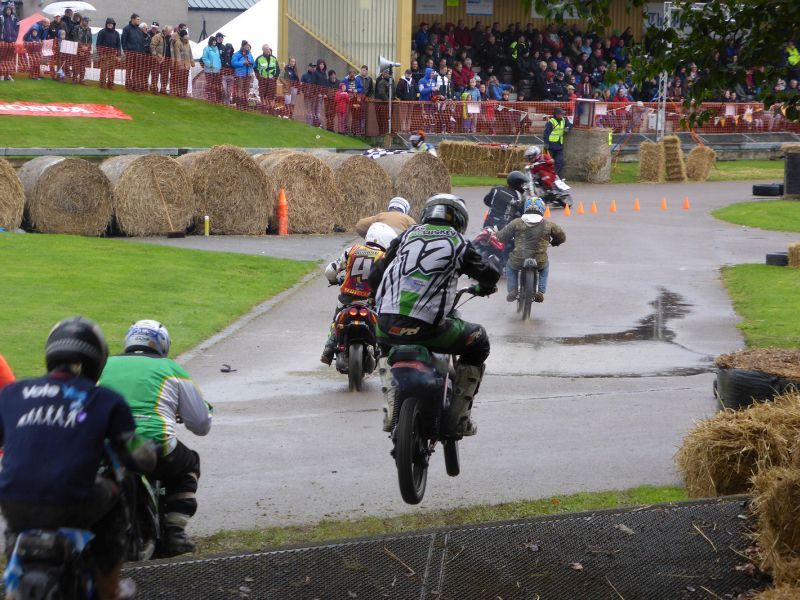 Despite atrocious weather conditions around 2,000 stalwarts descended on the outdoor arena to enjoy one of the very best motorcycle shows in Britain.
Performances from Scotland’s number one stunt rider Kevin Carmichael wowed the crowds throughout the afternoon.
Kevin’s competitive career began at the age of 7 when he took up schoolboy motocross and in 2002 Kevin was crowned World Champion in Texas.

The Convention introduced Moped Mayhem to the North East of Scotland in 1984 and this year’s Convention was no exception with a number of enthusiastic riders taking to the circuit and also to the custom built off road sections, which proved to be an interesting spectacle given the weather conditions.

Also taking place on the arena were the popular pursuits and Supermoto races, demonstrating speedway style riding skills in front of the packed grandstand.

Ever since the Convention began in 1983 there has been a vintage and classic bike parade – this year there were over thirty bikes of all ages on display and on the track. Museum Trustee, Peter Donaldson brought along his 1962 Ariel Leader which took to the circuit during the Classic Bike Parade.

Peter has been taking part in the Convention for the last 10 years and commented:

“Considering the awful weather I thought it was a fantastic day. The Grampian Motorcycle Convention really is the highlight of the year as far as the Biking calendar is concerned and I can’t wait for the 2015 Convention”

Also in attendance for the first time was Honda’s ‘My First License’ – providing youngsters with the opportunity to learn to ride in a safe and controlled environment.

The Grampian Motorcycle Convention is run by the Bon Accord Motorcycle Club and is a regular fixture in the Grampian Transport Museum’s busy outdoor calendar.