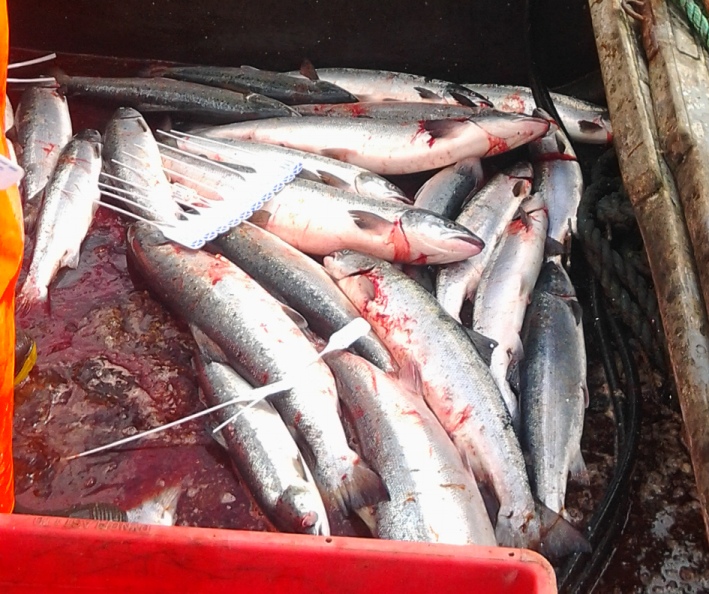 Salmon amidst gore, killed in a coastal net.

The Salmon and Trout Association (Scotland) is appealing to Scottish Ministers to encourage maximum restraint in any exploitation of salmon in the next few months.

The appeal is in response to this year’s very poor runs of salmon, which so far in 2014 are believed by many to be the worst in living
memory.

The evidence for this is from angling catches, in-river netting catches and fish counters across most of Scotland.

Thus the provisional number of fish recorded at the counter on the River North Esk (Scotland’s most closely monitored river) to the end of July is just two-thirds of the five year average. The poor runs in 2014 follow very sparse runs in 2013.

“The very limited numbers of salmon returning to our shores reflect poor marine survival for the second year running. On many rivers, angling catches to date are no more than 50 % of what one would normally expect.

“Given the gravity of the situation Scottish Ministers need to intervene immediately to stop any further killing of salmon this season by the coastal nets. In recent weeks salmon returning to the coast after their marine migrations have, because of the low water levels in most rivers, been either reluctant to or unable to enter their rivers of origin.

“Due to these summer conditions depleted stocks have meandered up and down the coast where they have been highly vulnerable to the coastal nets. These nets have been able to kill an entirely disproportionate number.  The Government’s support for the netting industry, and its failure to regulate or limit catches, is now coming home to roost.

The number of salmon killed in nets in 2013 was 50% higher than in 2012 – according to the official Scottish Government figures. There are no quotas set for wild salmon and consequently there is no mechanism to limit catches by netsmen – whatever the strength or weakness of local populations.

“It is fundamentally inequitable that Scotland’s coastal netting stations, which employ no more than 50, mainly part-time, individuals, are permitted to kill as many salmon as they are able to, before the fish reach our rivers. Wild salmon are a dwindling resource and the over-riding priority must now be to protect the 2,000 plus jobs of gillies and others on our rivers that depend upon a thriving angling industry to be viable.

“Angling, with the great majority of salmon caught released safely back into the river, is essentially sustainable but, if our rivers do not hold sufficient salmon stocks, anglers will simply vote with their feet – thus jeopardising in-river employment and the economies of local communities. In these circumstances Scotland can simply no longer afford to allow unrestricted coastal netting.”

The Salmon & Trout Association (S&TA) was established in 1903 to address the damage done to our rivers by the polluting effects of the Industrial Revolution. For 111 years, the S&TA has worked to protect fisheries, fish stocks and the wider aquatic environment on behalf of game angling and fisheries.

Mixed stocks coastal netting stations indiscriminately catch any salmon passing by, regardless of where they are heading or the strength of the various populations in their home rivers. They are completely non-selective, making the management of individual river stocks almost impossible.

The Scottish Government’s 2001 Green Paper on Freshwater Fish and Fisheries stated that:

“the exploitation of salmon outside their river of origin is widely accepted as contrary to good salmon management, primarily on the grounds that it does not discriminate between separate river populations and therefore severely inhibits monitoring and optimum management of exploitation of stocks on a catchment basis.”

In addition, 17 rivers in Scotland are designated as Special Areas of Conservation, part of the Natura 2000 network – a series of internationally important wildlife sites throughout the European Union. The random nature of mixed stock fisheries makes it extremely difficult to determine the impact of such fisheries on these important conservation sites.

One Response to “Conservation Group Calls To Limit Salmon Exploitation”